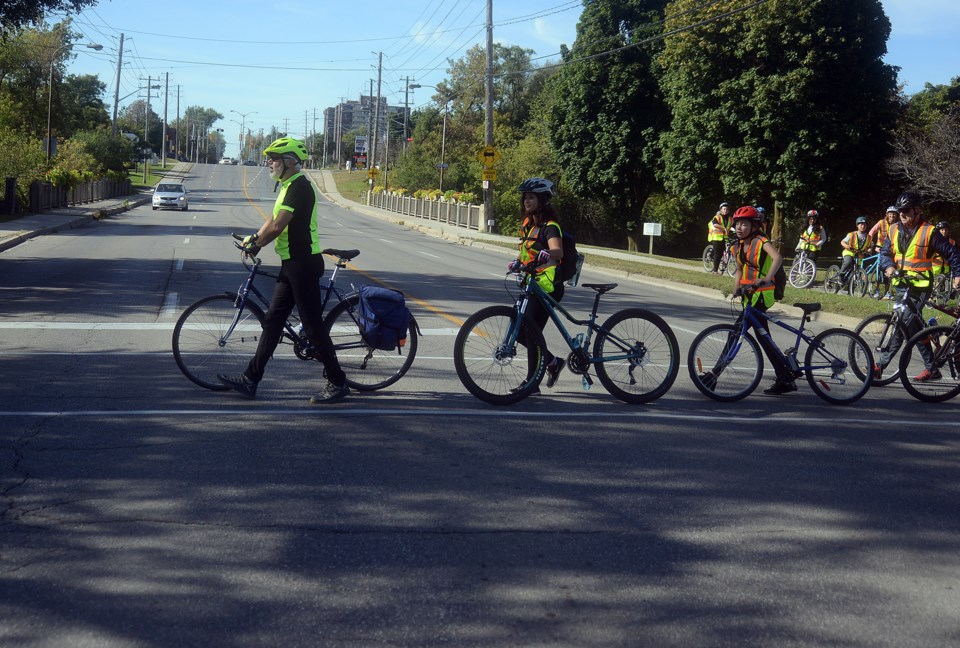 A group of Grade 8 students from St. John Catholic School use the crosswalk to cross Speedvale Avenue after riding the trail through Riverside Park in 2017. Tony Saxon/GuelphToday file photo

City staff is going to look at additional measures that might be available to connect the city’s trail to Riverside Park underneath the Speedvale Avenue bridge.

The project has been on the books for some time and is complicated by a number of factors, including accessibility requirements, floodplains and a retaining wall that the city says in need of major repair.

Currently people using the trail have to cross four lanes of Speedvale Avenue either with or without the nearby crosswalk to continue south of the road toward downtown.

In a perfect world the trail would be connected at the same time the bridge is going to be replaced in 2022.

But city staff said that while the section under the bridge will be done then, it is the two connecting segments on either side of the bridge that are at issue.

They said the chosen option would need serious remediation work done on a retaining wall, costing the city over $5 million in total. They recommended doing the work at a later date and implementing temporary measures above the bridge to help make crossing the road easier and safer.

Council agreed Monday night to support staff’s plan, but added two amendments brought forth by Ward 2 councillors Rodrigo Goller and James Gordon to explore another option: that staff explore other options as part of the city’s Official Plan and comprehensive zoning bylaw review. Changes in those rules could get the work done sooner and cheaper.

If that’s the case, staff will bring a new design and plan back to council that current regulations don’t permit.