Test started last week, with locations selected in every ward
Jun 10, 2021 9:00 AM By: Richard Vivian 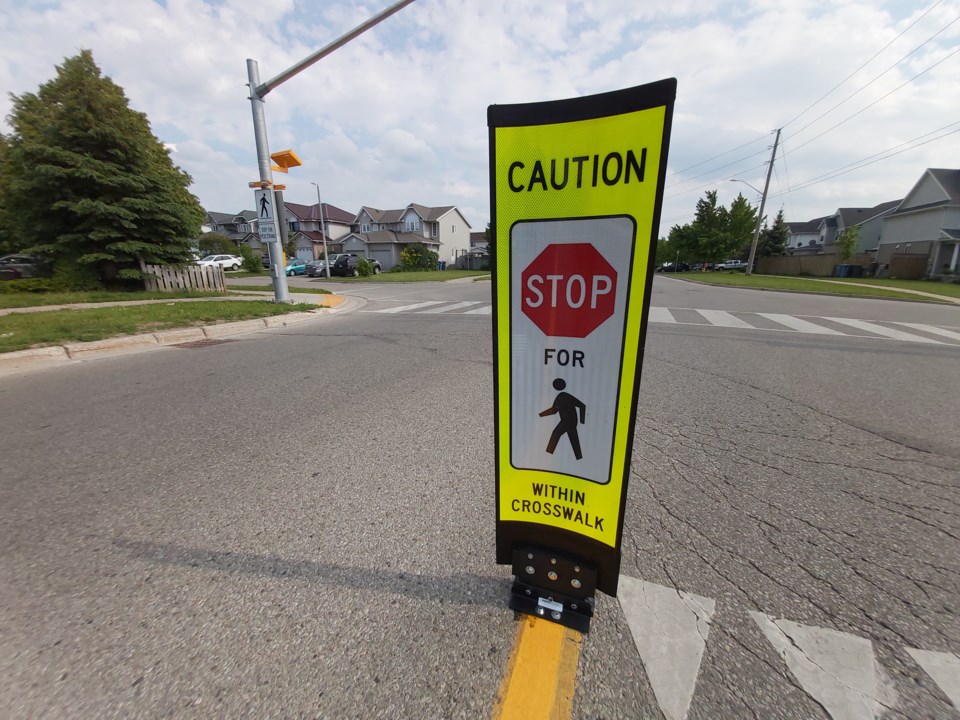 The city is installing new signage at some pedestrian crossings to raise driver awareness about the potential need to stop. This one is on Grange Road, immediately east of Kearney Street. Richard Vivian/GuelphToday

With an eye on improving pedestrian safety, the city is testing new, mid-road signage at a variety of pedestrian crossings.

The initiative began late last week, with caution signs installed at several crossings, reminding drivers they may need to stop for pedestrians.

“It’s about trying to make the street safer in any way that we can,” said Paul Hutchinson, the city’s supervisor of traffic engineering. “We’re excited to see what results we get from them and what impact these have.”

The signs are knock-down bollards, designed to stand back up if run over, he explained, adding they will be removed in the fall and, if a decision is made to continue with their use, re-installed each spring.

“It's kind of an added layer of (awareness) for motorists that pedestrians might be crossing,” Hutchinson said. “Because (pedestrian crossovers) are still fairly new to Ontario, it’s just to ensure that motorists are familiar with what’s expected of them and to make sure that these things are as safe as they can be.”

One or two test locations have been selected in each ward, spreading them throughout the city.

“It wasn’t really driven by issues at the (pedestrian crossings),” Hutchinson said of how test locations were selected. “It’s more that this type of marker is a newer option on the market and it’s just to try something new.”

In addition, the city is planning to install a number of knock-down bollards intended to narrow the roadway in several spots – something that’s being done as part of the Community Road Safety Strategy. They, too, are to be removed each fall and put back in place every spring.