Non-profit that was going to partner with city on project says provincial funding no longer available
Aug 27, 2019 7:30 PM By: Tony Saxon 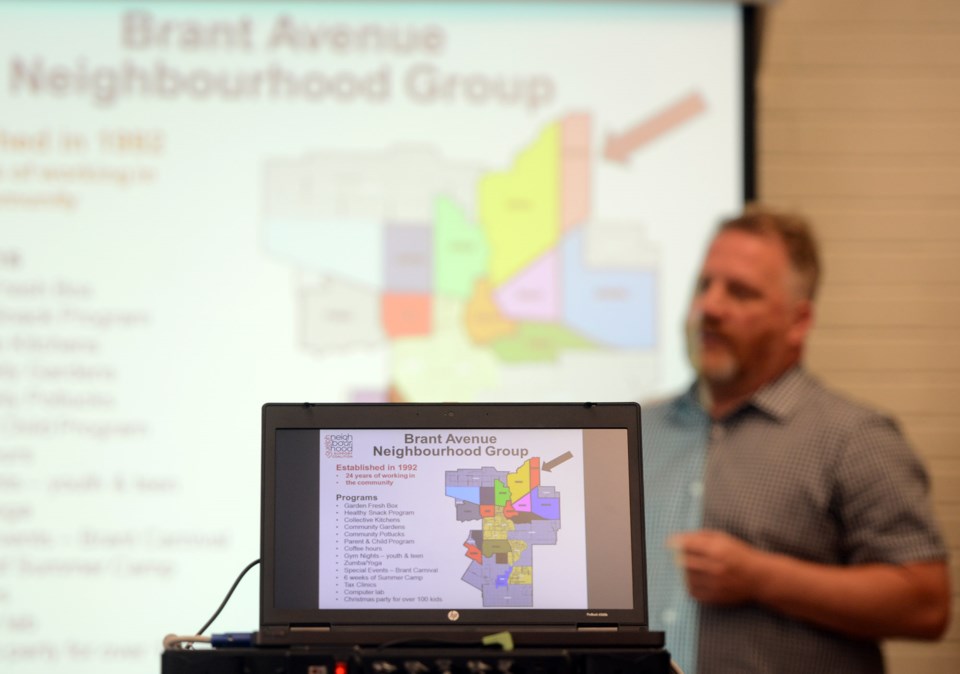 Brendan Johnson of the Guelph Neighbourhood Support Coalition speaks at a public meeting on a possible community hub in May of 2016 at Brant Avenue Public School. Tony Saxon/GuelphToday file photo

It appears plans to build a new community hub in the Brant Avenue neighbourhood are dead in the water.

A staff report heading to city council's Committee of the Whole Sept. 3 says that changes in the provincial political and funding landscape have resulted in Kindle Communities Inc, the non-profit that was going to partner with the city to build the hub, backing out of the project at this time.

The report says that funding for partner organizations that might have been tenants is also likely no longer available.

"Due to changes in provincial government and pressures on provincial funding, potential community hub proponents are unlikely to secure funding to build in the community. The same funding pressures may deter potential hub tenants from committing to leases within the hub," states the report.

Since 2013 talks have been underway that would have seen the city partner with several community organizations, including the Community Health Centre and Guelph Neighbourhood Support Coalition, to build a community hub that would offer services and programming in the neighbourhood.

Those services could have ranged from youth programming, dental services, counselling and a wide variety of other health and social offerings.

The site would have been behind Brant Avenue Public School.

In 2016 town hall meetings were held in the neighbourhood, including one that got very heated as area residents loudly and angrily expressed opposition to the proposal, citing lost green space and concerns over activities that might take place at the community hub.

Staff is recommending that the following council recommendation made in camera on Nov. 28, 2016, be rescinded: “That staff be directed to draft a non-binding offer to lease and/or letter of intent between a suitable community partner and the City of Guelph for the use of the two acre lot at Brant Avenue for a Community Hub which would form the basis of a long-term lease arrangement.”

The report says the city will continue to look at bringing together various services in existing buildings "to meet the service needs of the Brant neighbourhood."