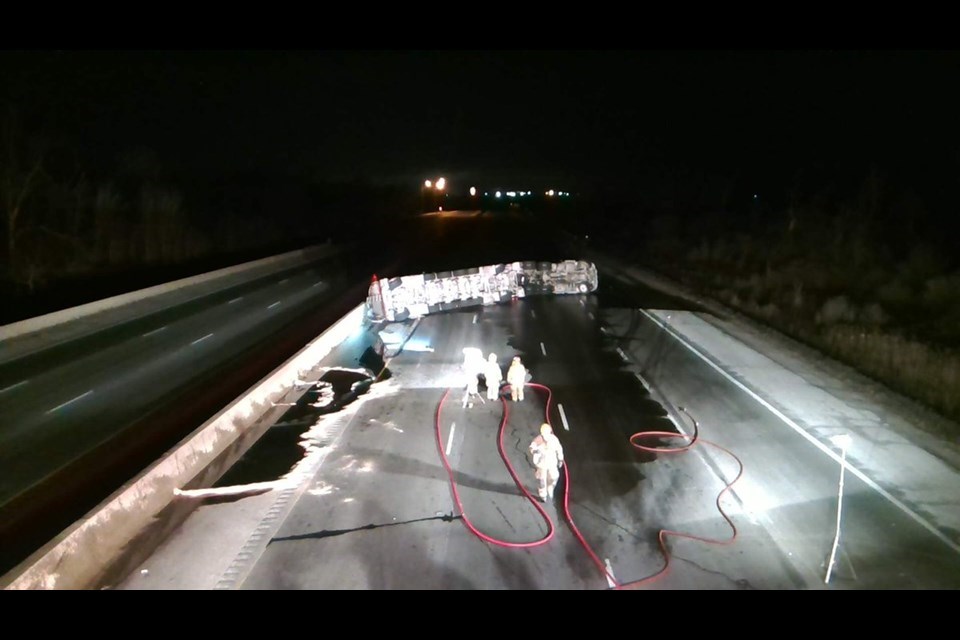 Despite the Ministry of Environment assurances, over a year later people are still concerned about the adverse effects of the 401 jet fuel spill.

In January 2019, 50,000 litres of jet fuel spilled onto the 401 after a tanker truck rolled over in a crash. Fuel leaked into the nearby wetlands and creeks and crews began the long process of cleaning up.

As of May 2019, reports provided by Stantec to the Ministry showed no further adverse effects to the surrounding area. The reports have not been released to the public, which has led to some groups to demand to see them.

Friends of Mill Creek is among the groups calling for the documentation to be made public. Meanwhile, the Grand River Conservation Authority has since opened the Shade's Mills Conservation Area.

Dr. William Taylor, Distinguished Professor Emeritus, Aquatic Ecology and Limnology, University of Waterloo appeared on the Mike Farwell Show on 570 NEWS Thursday. He hasn't seen the reports, but said the hydrocarbons that make up the jet fuel are no longer a danger.

"Hydrocarbons aren't the most toxic things in the world. You know, we're all subjected to them in an industrial society," he said. "It was very unfortunate and it probably did a lot of damage to the creek, but the creek should eventually recover."

"I don't think there's a public need to be concerned, except I'm sure the public would like to know what the recovery has been so far and I guess they like to be assured that eventually the recovery will be complete."

He explains that after the cleanup efforts, the remaining hydrocarbon had "essentially two major fates for them." The lighter hydrocarbons---while volatile--after a year they would have evaporated. The heavier compounds in the mixture would stick around a little longer attaching and detaching to its surroundings, but would be diluted by moving downstream. They would then be eaten by aquatic bacteria and turned into "carbon dioxide along with the leaves and all the other organic material that fall into a stream."

The Kitchener-Waterloo-Cambridge Bassmaster's club has fished in the Shade's Mills Conservation Area in years past and participated in conservation efforts. Paul Kroisen-Brunner, who's the club's secretary, said their club had concerns after the spill happened and voted to put off their fishing tournament last summer to reduce stress on the fish.

After the Ministry of Environment said there were no further issues from the spill, Kroisen-Brunner said their bass fishing tournament will be returning this year.

"I'm going to take their word for it. I don't need to know the intricate details of parts per million or whatever and I'm sure that's all going to be listed in any report that comes out, but that's not a concern for me."

The Ministry of the Environment, Conservations and Parks provided a statement to 570 NEWS on Friday morning.

"We have identified downstream surface water impacts and ensured appropriate containment measures were implemented to deal with the complexities of a jet fuel spill in the natural environment.
To date, no impacts have been observed in the Grand River or to local drinking water. The ministry has not received any first-hand evidence of impacted wildlife at this time.
As the reports are owned by a third party, the ministry has advised inquirers to complete the required Freedom of Information Request or to contact the documents owner for release.

The consultant has released the reports to stakeholders upon request, including The Grand River Conservation Authority, Township of Puslinch, Region of Waterloo and Public Health."