Reconstruction and new bridge will mean more traffic, according to Martin Collier
Mar 23, 2017 10:00 AM By: Rob O'Flanagan 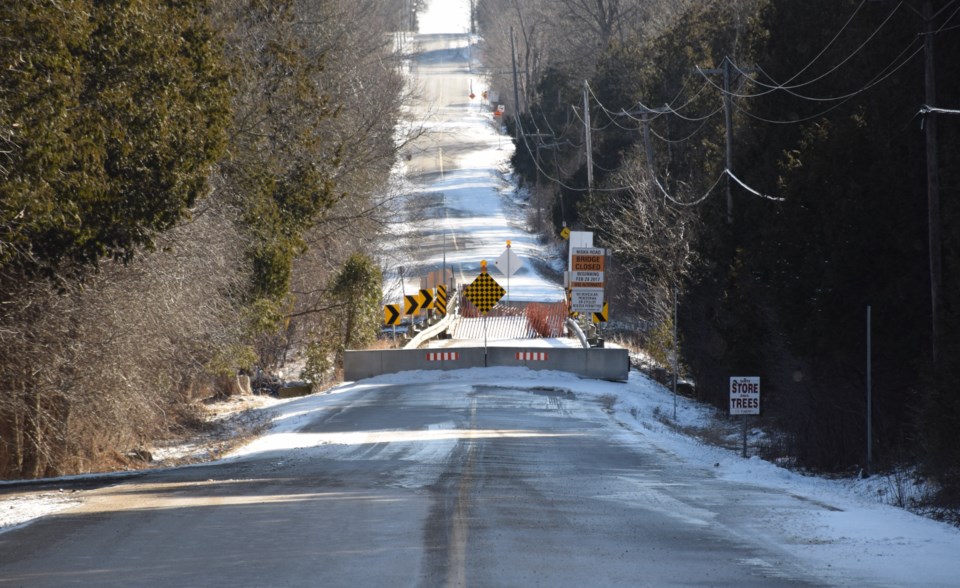 The Niska Road bridge is now closed, and will stay that way until the road and bridge are reconstructed. Rob O'Flanagan/GuelphToday

Over 4,000 vehicles passed over a single-lane bridge on Niska Road each day before it was closed last month, the safety of the aging Bailey-type bridge cited as the reason.

What routes are those vehicles using now to get where they’re going, and how many more vehicles will use Niska Road as a shortcut once the road is rebuilt and the bridge replaced?

Those are among the questions Martin Collier is asking. The transportation expert is the director of Healthy Transport Consulting. He said the City of Guelph’s announcement Tuesday that it has been cleared by the province to move ahead with the reconstruction of Niska Road and the replacement of its bridge over the Speed River should not go without being critically examined.

Collier said he has spoken to many in the southwest neighbourhood near Niska who are opposed to the redevelopment. Traffic, most of it using the road as a shortcut between the Hanlon Expressway and Highway 124, is already heavy. It will certainly get heavier.

“There are people in the neighbourhood who will obviously be affected by a bridge that will bring more cars,” Collier said in an interview Wednesday morning. “As soon as you expand a road, more vehicles will use it. That’s just the nature of transportation. As the city grows, there will be more cars.”

Dorothy Griggs has lived in the area of Niska Road since the 1950s. The road, she said, has experienced a significant spike in traffic in recent years, to the point where residents living along the upper part of it have trouble getting out of their driveways.

She has no doubt that the reconstruction of the road and a new bridge will increase traffic, making the conditions worse for residents. She wants the road left as it is, with repairs done to the bridge, and restrictions placed on large trucks using it.

Collier said the river valley along Niska is one of the few pristine natural areas remaining within city limits. He worries about the environmental impact of the reconstruction and increased traffic. There is speculation that part of the area along Niska could open up to residential development. Congestion on the road poses a safety hazard, he added.

“Why can’t we keep a place pristine for once, instead of having to develop it,” he said.

On Tuesday, the city announced that Glenn Murray, minister of the Environment and Climate Change, decided it was unnecessary to engage in a higher level environmental assessment on the reconstruction, clearing the way for the project to move forward. The EA work already conducted was satisfactory.

The city said in a press release on Tuesday that it is now ready to proceed with “much needed improvements to Niska Road that support Guelph’s safe and efficient transportation system.” The plan was approved back in 2015. There was organized opposition to it prior to its approval.

The bridge was closed in late-February, and will remain closed until a new bridge is complete. A heritage impact assessment (HIA) is planned, with a public consultation component, and there will be public discussion on incorporating bike lanes into the project before the final design is completed.

Collier said the different mapping systems in vehicles direct motorists to use Niska as a shortcut, and that is perhaps the main reason why traffic is increasing. The growing amount of traffic is flowing in both directions, he added.

“It is an environmentally significant area,” he said. “It is one of the last pristine areas of Guelph. Obviously the city does its spin about making that area more efficient and safe. Engineers are trained to manage the systems and rehabilitate the impacts those systems have after the fact. They don’t look at managing demand before hand.”

With the bridge now closed, there is an opportunity to examine the alternative routes motorists are using, and to measure whether the shortcut actually saved them travel time, Collier added.

The estimated cost for improvements to the road is approximately $2.1 million, and the bridge is a $2.4 million cost. The city has already spent $650,000 on the environmental assessment process.

Collier said since the bridge closure there have not been detour signs placed at the entrances to Niska, an indication that the city does not see it as an important transportation route.