One person was charged with multiple counts of theft and is no longer a student at U of G
Oct 16, 2020 1:30 PM By: Kenneth Armstrong 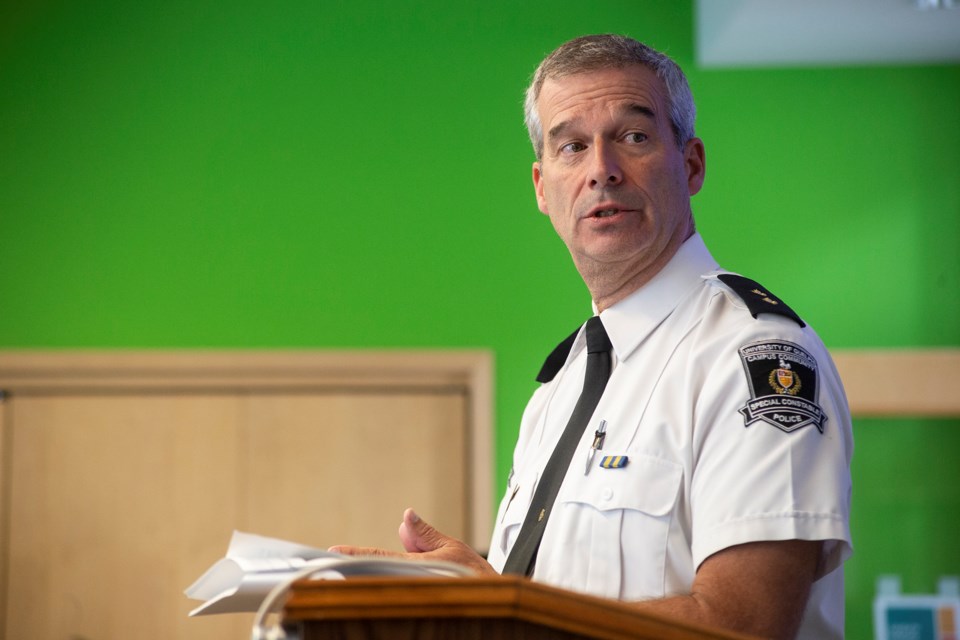 David Lee, director of U of G Campus Community Police, speaks to the Guelph Police Services Board in 2019. Kenneth Armstrong/GuelphToday file photo

Crime statistics at University of Guelph are mostly down across the board due to COVID-19, says the director of Campus Community Police.

On Thursday, David Lee shared the organization's annual report with the Guelph Police Services Board.

“In terms of the annual report, it’s very skewed because of COVID," Lee told the board. "So the campus shut down, as everyone knows, students went home so the numbers, the stats are way down from most years, it’s not really a comparable report with other years."

Although there were fewer charges laid in 2019-20 compared to the previous year, Lee said one category was the exception: theft by student, with multiple counts recorded.

"That’s attributable to one student," said Lee. "It’s because of one student who was on a stealing spree, was caught by one of the officers and prosecuted with a lot of help from Guelph Police and that person it no longer at our school."

He added: “That was kind of a crime spree that was put to an end by our officers.”

Calls for service were up this year due to a marked increase in the number of proactive patrols by officers, said Lee. For instance, alcohol offences went from 82 calls in 2018-19 to just 19 in 2019-20.

Those proactive patrols have tripled over two years, said Lee, with sergeants identifying where they think targeted patrols are needed.

“Then we share with the other sergeants and we make sure the patrols are done and the reason we know they are done is that we track them," said Lee. “It could be COVID, but right now we seem to be doing fairly well in terms of serious calls and I believe it’s because of our increase in patrols.”

Drug related calls dropped from 51 last reporting year to just eight  in 2019-20. That drop was also attributed, in part, because of the legalization of cannabis. A total of 85 smoking complaints were also responded to last year.

Some calls were up this year, like criminal harassment at 15 calls versus seven in 2018-19.

For trespassing charges, 70 percent were laid against people from outside U of G.

The staff and special constables have been in a constant state of training recently, said Lee. They are either finished or part way through training for anti racism, anti oppression, mental health and sexual assault.

“There can never be an end to training,” said Lee. “It works and it’s something that needs to happen.”

Lee said a training program for Indigenous issues is currently being developed with the assistance of Indigenous leaders on campus.

“We will have it designed by our Indigenous people here on campus and delivered to all of my staff, including the dispatchers,”