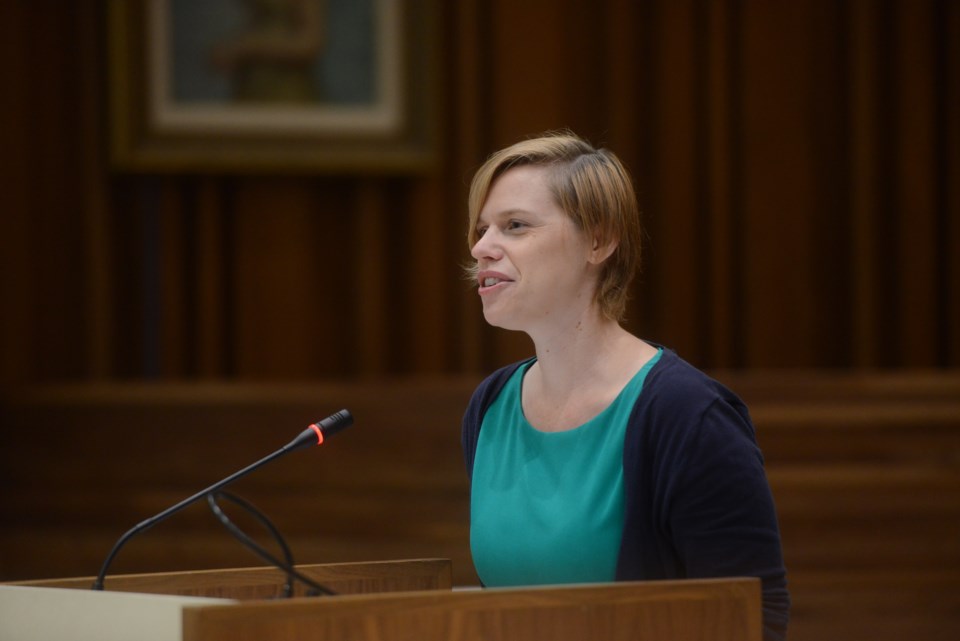 Keely Phillips, manager of self help and peer support with the local branch of the Canadian Mental Health Association, speaks at the Mayor's Mental Health Day event Thursday at city hall. Tony Saxon/GuelphToday

Peer workers, family and four-legged friends can all play a key role in helping people suffering from mental illness.

Those non-traditional forms of help were all front and centre Wednesday at the annual Mayor's Event For World Mental Health Day at Guelph City Hall.

The event was started by former mayor Joe Young in 2000 as a way to discuss, break down the myths and highlight some of the organizations involve in mental health.

Keely Phillips, manager of self help and peer support with the local branch of the Canadian Mental Health Association, said peer workers "bring an authenticity" to the table that some can't.

She said the road to recovery for those suffering from mental health issues is a tangled one and everyone's journey is different.

"Peer support workers will walk beside people every step of the way," Phillips said, adding that not all lived experience for those having gone through mental health issues is negative.

"There's also recovery and resiliency" which can help plant essential seeds of hope "which is essential for recovery," Phillips said.

In addition to helping individuals, those with lived experience can help create more effective and innovative policy and programs, she said.

Peer help in Guelph can be found at CMHA location at 147 Wyndham St. N. on a free, walk-in basis.

"Without her, I don't think I'd be here," said de Boyrie.

His mother didn't try to fix him, she encouraged and pushed him in the right direction.

"She also encouraged my independence, which for me is a big deal," said de Boyrie, whose mental health issues surfaced in his late teens.

He said help is different when it comes from someone you know and love.

His mother said those suffering from mental health issues need love and respect, and that's what families have to do.

Help, do whatever is necessary, then when the person is ready, Paton said, you give power back to the person.

NSD provides trained dogs for people with autism, for veterans and first responders suffering from PTSD and through its Canine Assisted Intervention programs, which involves emergency response in situations where a service dog could be of assistance.

Those emergency interventions include the van attack in Toronto last summer, where service dogs were brought in to help relieve the stress of the first responders.

"Having a dog there changes the whole experience," said Trussler. "It changes the flavour of your day. There's something magical about dogs."

National Service Dogs, one of several service dog organizations, has a three to four year waiting list for dogs, she said, adding that they had 5,000 inquiries last year alone.

Her organization is looking into having a service dog in first responder facilities like fire halls and police stations.

"To be able to relieve some of that stress at a very critical time is so important," Trussler said.

Partnership in Arthur looks at streetscape improvements
Jun 2, 2020 4:00 PM
Comments
We welcome your feedback and encourage you to share your thoughts. We ask that you be respectful of others and their points of view, refrain from personal attacks and stay on topic. To learn about our commenting policies and how we moderate, please read our Community Guidelines.