'It just doesn’t make sense that our personal care businesses are being discriminated against'
Apr 7, 2021 10:00 AM By: Ariel Deutschmann 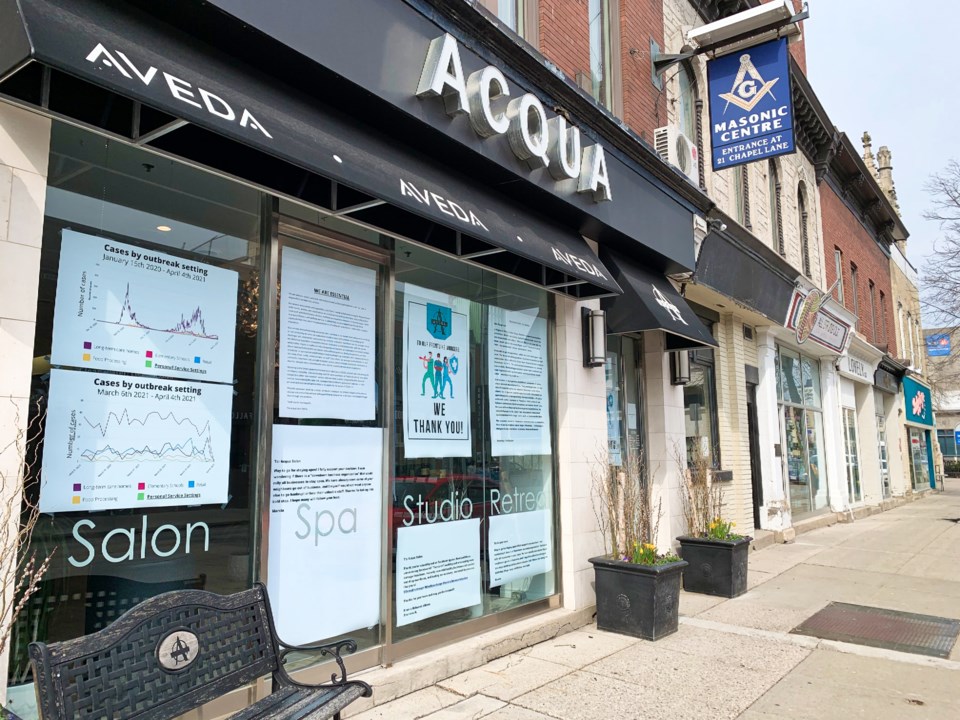 Update (9:30 a.m. Tuesday): City staff report that they visited Acqua Salon on Tuesday and found they "weren't providing personal services (conducting business)." As a result no charge or fine was issued. "If we return and find they are conducting business and contravening Ontario regulations, we will issue a court summons. If convicted they could face a fine as determined by the court (up to $10,000). If the matter persists, we may consider revoking their business license."

After being ordered to close again in the provincial COVID-19 shutdown, a local hair salon has decided to remain open.

Acqua Hair Salon, which has two locations in Guelph, is keeping their location on Quebec Street open for clients who wish to come in and support them.

“It just doesn’t make sense that our personal care businesses are being discriminated against,” says Teija Tucker, a stylist at Acqua who has been with the company for over 14 years.

Tucker mentions the salon was fully committed to stopping the spread of COVID during the provincial lockdown back in March.

However, she says Acqua reported no cases of COVID from either location after closing last June and received no calls from Public Health. Now being asked to close a third time, Tucker comments they can't keep doing this.

“We’ve reached a point financially, where we can’t close, we can’t keep doing this,” she says, mentioning she can’t survive on government subsidies.

Since making the decision to remain open, Acqua Hair Salon has not received a fine. Tucker says a bylaw officer did speak with the salon on Tuesday morning.

“But it was a really good conversation, and I feel really bad for bylaw officers, they’re stuck between a rock and a hard place because they need to do their jobs, they have to uphold their responsibilities.

“It was an unfortunate conversation to have to have, but I still feel like we’re supported by our city.”

With zero cases of COVID linked to hair salons in Guelph, personal care businesses feel they’re being targeted by the provincial mandates.

“It’s taken a toll on everyone, there are salons that have already closed and there are ones that are on the tipping point,” Tucker explains, “Where these next few weeks can either make or break them.”

Since the salon is running at less capacity, Tucker says they are able to safely operate only one location.

She adds that Acqua owner Pina Marfisi has gone above and beyond the COVID safety guidelines to keep staff and customers safe.

Marfisi said late Tuesday afternoon that they had not been given a ticket.

“There’s already safe distancing, six feet apart…put plexiglass in between all of those chairs, we’ve gone ahead and started using disposable capes, the amount of sanitizers and cleaning, we were already doing a great job, but it’s been above and beyond,” says Tucker about the investments Marsifi has made to the business.

“So the investment in that, for the safety of our staff and our guests, is pretty incredible.”

In an email statement, Marfisi says she spent time during the second lockdown writing to Premier Doug Ford and other elected officials with no results. A petition with over 1,200 signatures was also sent to Green Party MPP Mike Schreiner in January, followed by a 30 minute telephone call with the MPP.

"We are pleading with our provincial government to reconsider opening our personal care sector as it has proven to be a safe space during these hard times, and redirect his efforts to industries such as warehousing, construction, etc. and make those sectors safe for the essential workers that attend our front lines everyday." says Marfisi in the email.

Tucker says the community and some of their guests have been very supportive, and have received letters from fellow salons in Guelph and customers, which now hang in their storefront windows.

“The outpour almost makes us a little bit emotional because of how many of our guests have reached out to support us,” she says, “Even people from the community that may not be guests at this current time, it’s pretty amazing.”

By remaining open, Tucker hopes people will recognize that salons are safe.

“I think people, if they’re nervous about us being open, they don’t understand because they just hear that salons are closed so they think  that we must be the spread of COVID,” she explains, “So to see the graphs from public health, the numbers from public health, that there’s been zero outbreaks in personal care in Guelph, Ontario, that’s a pretty hard number to argue.”