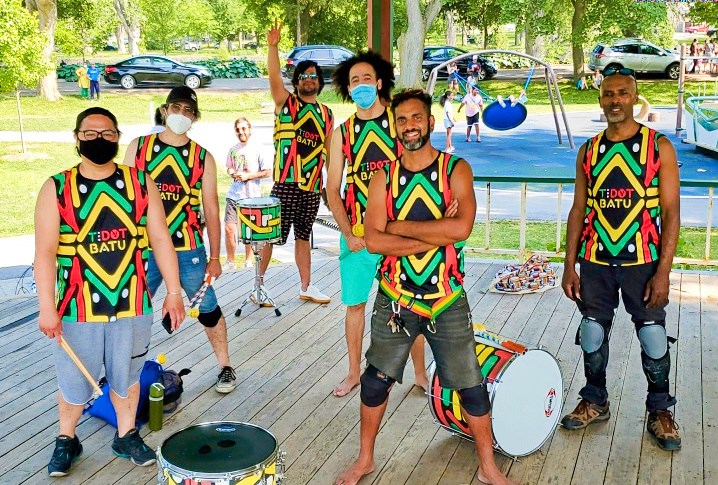 Pato Irie Martinez, back centre, with members of TDot Batu in Guelph on Sunday. Photo from Sky Rover.

If you follow a different beat then a new drumming program coming to Guelph this summer may just be for you.

TDot Batu is a Toronto-based band which focuses on samba reggae, a type of Afro-Brazilian music which originated in Salvador, Bahia. The group has performed in different festivals in Toronto and around the world.

Now, the leader of this group is hoping to create another drumming group in Guelph by offering lessons for beginners.

“Even though I have a band in Toronto, I want to have a band here too,” said Pato Irie Martinez, the leader of TDot Batu.

"You don't need to have experience drumming... I actually prefer people without experience."

Before the pandemic, Martinez ran drumming workshops for corporate events, school events and more. He even mentions going to Hamilton to run lessons with a drumming group there.

“It's for Adults, for teenagers, anyone can play,” he said.

"People get really into it, it's almost like a therapy."

On June 6, Martinez and several other drummers performed at Royal City Park and in Elora to raise awareness about their group and encourage residents to sign up for the program.

Martinez recalls many people were respectful of their performance and curious about their group, something he hoped would happen.

“I wanted to create a little buzz and leave people with a bunch of questions,” said Martinez, “I explained and now I’ve already got about 10 people who are ready to join.”

He may have only lived in Guelph for five months, but Martinez explains he has been drumming for a very long time.

“What I do in Toronto, I have done 20-something years before," he said.

"In Brazil...they all know who I am, they know there is a band called TDot Batu, they know we represent the culture here."

Growing up in Salvador, Bahia, Martinez was fascinated with samba reggae and had learned how to play. As a young adult, Martinez moved to Chile and became part of one the country’s number one drumming group.

“I’ve been drumming my whole life,” said Martinez, “I believe I need to do it at least once a week with a group.”

When Martinez moved to Canada in 2008, drumming became a way to build community. At the time, he said it was a hard experience as his mother passed away.

“I basically created the group to save myself,” said Martinez, “The drum has that kind of power.”

He also mentions samba reggae is popular in countries around the world, but is not well-known in Canada.

Despite that, TDot Batu grew to over 30 members. Compared to other drumming groups he has participated in, Martinez explains his current group is more diverse.

“Here in Canada, I have a group and I have Asians, I have Africans, Indians, Europeans...South Americans, Central Americans, I have everyone around the world,” he said, “They're so cool, it's so interesting."

"We want to share the love, that's why we came to Guelph."

Anyone interested in joining the group can contact Martinez at 416-949-5654. To learn more about TDot Batu, go to tdotbatu.ca.