Emotional strategy building where a horse is your teacher 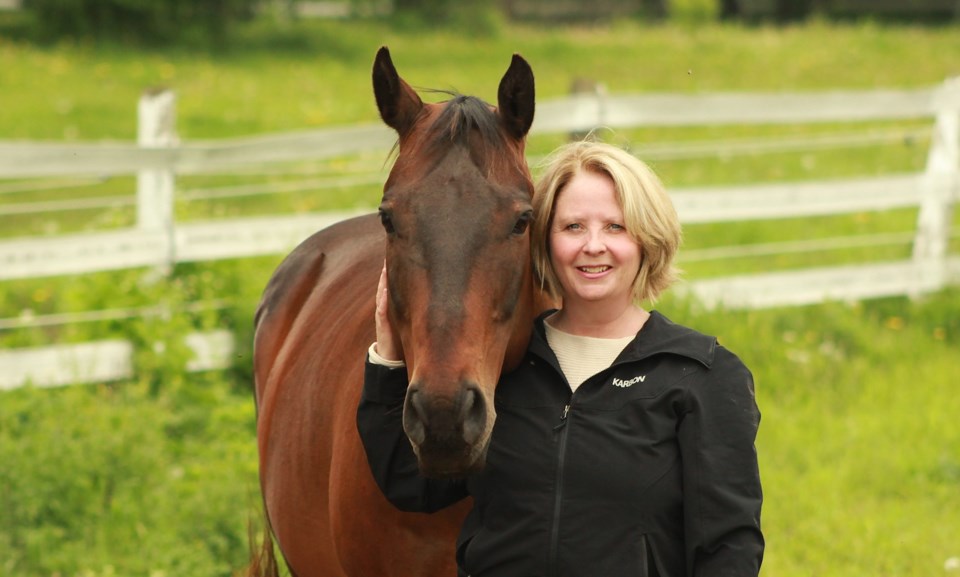 Gail Carruthers with her horse, Sky after whom the farm Sky Blue Acres is named after. Anam Khan/GuelphToday

If you go to Sky Blue Acres in Puslinch, you will find a 185-year-old farm, 23 acres of farmland, scenic surroundings, horses as your coach and you just might even find yourself.

Owner Gail Carruthers runs an equine guided learning (EGL) lab in her farm in which she works with horses to teach leadership and team development skills with a lifestyle context to individuals and groups in order to help them identify their emotions and create strategies to address those emotions appropriately.

Originally from Brampton, Carruthers got trained in EGL five years ago and recently set up her business in her new farm that uses the EGL’s approach of utilizing a horse’s heightened natural ability to detect its surroundings to identify human emotions.

A mediator who specializes in experiential learning, conflict resolution and adult education, Carruthers brings all those skills and blends it with the EGL.

“I really wanted to take this into the corporate world and I just wanted to expand my repertoire,” says Carruthers.

The approach builds on a horses ability to detect a person’s respiration rate, heart rate, body language and even whether or not a cat is prowling in a distance.

“It is all measurable for them,” says Carruthers adding that they can even feel a fly on their back.

She says horses are so sensitive to their environment that they can detect the overwhelming amount of emotions humans tend to feel sometimes.

When the horse responds to those human emotions, acknowledging that emotion becomes palpable.

“People might not speak up but the horse will speak up, and you know what? People listen to the horse,” says Carruthers

“The horse responds a hundred per cent and as a facilitator that's when we step in.”

Carruthers says one of the things she works on is to get people to look away from their thoughts and into their bodies and their hearts in order to open their heart space that connects to intuition.

“There is so much intelligence in our bodies but we’re so in our heads which is the executive function of our brain,” says says Carruthers.

Carruthers says while it is difficult to define what this connection with a horse is, there's actual science to this.

“Because the horse is a preyed animal, meaning a deer or an animal that they are preyed upon, they're herbivores. Because of that they've had to develop a supersonic sense radar around their environment in order to survive,” says Carruthers.

“As an example, the respiration rate of a mountain lion would be no different for them to detect as a predator coming through the bush for them versus our emotions. It's all energy.”

Carruthers’ business custom designs a variety of activities by accessing the goals of the individuals or teams before they come in.

“If they are coming as corporate then what's the goals and objectives of your team? What's going on with your team? Are you looking to increase productivity? Or trying to make the team gel better? Are you looking cause you're bringing two different teams but they need to work for a short period of time?” says Carruthers.

While its called team building, Carruthers acts as a facilitator by analyzing the horse’s behaviour in order to debrief and unravel the findings.

She says a lot of times, people are trying to connect to themselves and in an effort to do so, Carruthers conducts physical exercises as well as collaborative exercises with the horses.

She says in a team there could be a time when there's a part of a project that no one feels confident about but no one is talking about it. So that will come up very clearly addressing the inter-dynamic problems taking place within a team.

“A lot of the times there is individual goals which are competing with Team goals and that comes flying out when we work with teams,” says Carruthers.

“And it's about getting people back into alignment so the team can be as productive and as gelled as possible.”

And while it might resemble therapy, it is not. Traditionally known to be used with special needs children, individuals with PTSD, anxiety, and depression, Carruthers says that the lessons that can be derived from being in a horse’s presence are different than therapy because they don't require a deep look in a person’s past, rather, it looks at a person’s present state.

“Therapy is when you're digging straight into a trauma. This is not therapy. That's the beauty of what I'm seeing here. There's so much unspoken, underutilized opportunities people almost umbrella under therapy,” says Carruthers.

“I've helped people over a block in their life and never ever talk to them about trauma. I never go there with them because it's not my expertise I'm not a therapist.”

She gives the example of a horse that walked right up to a woman who visited the farm and touched her nose and her belly empathizing with her. Carruthers says the woman didn’t realize that it was in fact sadness that had overcome her that the horse could sense. All the woman needed was to acknowledge the emotion she was feeling in order to address it.

And once addressed, it could then be dealt with using the information that comes along with it.

“Emotions have information. There's some information behind every emotion that is informative for us, that has something to tell us but we don't know what to do with that so we just slam them down,” says Carruthers.

“A lot of the times were so much in our heads and we are overthinking. Were missing clear opportunities, were missing clear solutions to problems, situations, challenges that were not seeing because we’re in a pattern of thinking.”

She says as humans, we are always being logical and while logic plays a crucial role in our evolution, we also need to tune into our intuitive side that is equally a part of us and equally carries the same amount of information.

And while part of the experience is working with the horses, the entire experience is to get out of the boardroom and urban area and get in touch with nature.

“A lot of times your body knows what the right thing to do it but we’re always going outside of ourselves. That's what we’re trying to help people understand,” says Carruthers.

“We are trying to reintroduce a person to themselves.”