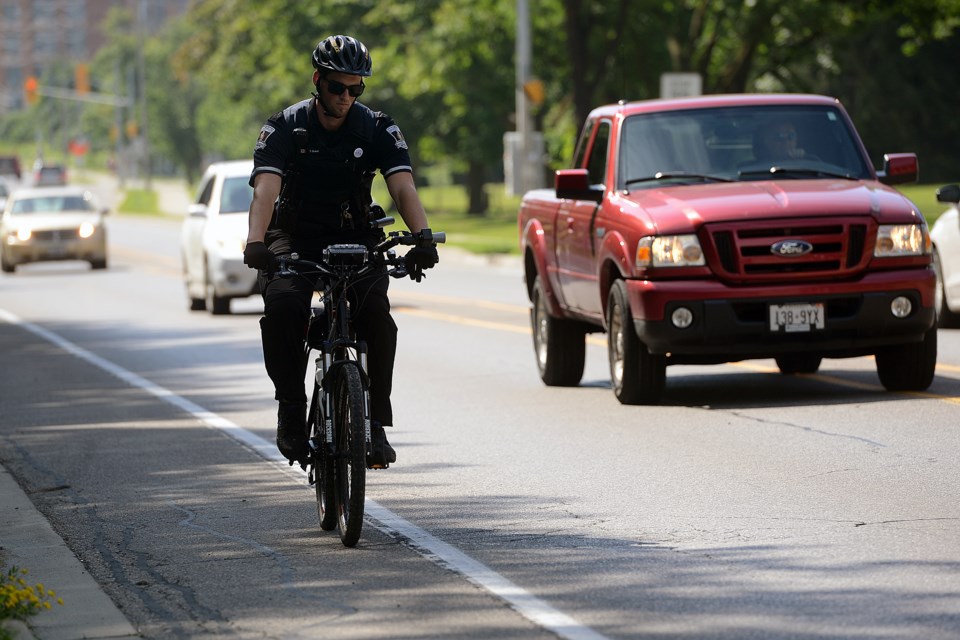 Const. Tom Guest of the University of Guelph Police rides his bike on Gordon Street, one of the locations to get protected bike lanes. GuelphToday file photo

The good news is the city has been given several million dollars to invest in an expanded downtown bus terminal and protected bike lanes on three busy roads. The bad news is it will be years before they're completed.

A joint announcement Tuesday morning between the three levels of government announced that a new bus terminal will be built at the opposite end of Guelph Central Station from the train station. It will include indoor seating for up to 25 people, public washrooms and dedicated washrooms/lunch room for Guelph Transit employees.

It will be located in the empty space where platforms 21 and 22 are located and will be approximately 2,800 square feet in size.

That $11.5 million project has no timeline, but city Deputy CAO Kealy Dedman said Tuesday it is a long term project that is "years away" from completion.

The city is getting a total of $8.35 million from the provincial/federal Investing in Canada infrastructure plan for the two projects. The city will be contributing $11 million, paid for by both development charges and tax funding.

"It's great news for those of us who like to get around town on two wheels and it's going to be an amazing opportunity for those that are in the downtown and wanting to have a place to rest. Especially for the transit drivers to have a lunchroom and washroom facilities," Guelph MP Lloyd Longfield said.

"Infrastructure is important because it's real things to real people: families and people that are accessing these services."

The bicycle improvements are also meant to help with connections to the city's main transit loop.

Guelph Mayor Cam Guthrie said that it's good to see that decisions on needed, positive economic projects are being made during tough times.

"This is an announcement today about getting things done for our city," Guthrie said. "Projects that are dearly needed, thoughtful and sustainable projects."

"In so many ways we've been in reactionary mode, but that doesn't mean we've been stopping to plan for our community's future."

Stephen Crawford, MPP for Oakville, representing the provincial Ministry of Infrastructure, was on hand for the virtual funding announcement, calling it "another great day for transit in Guelph."