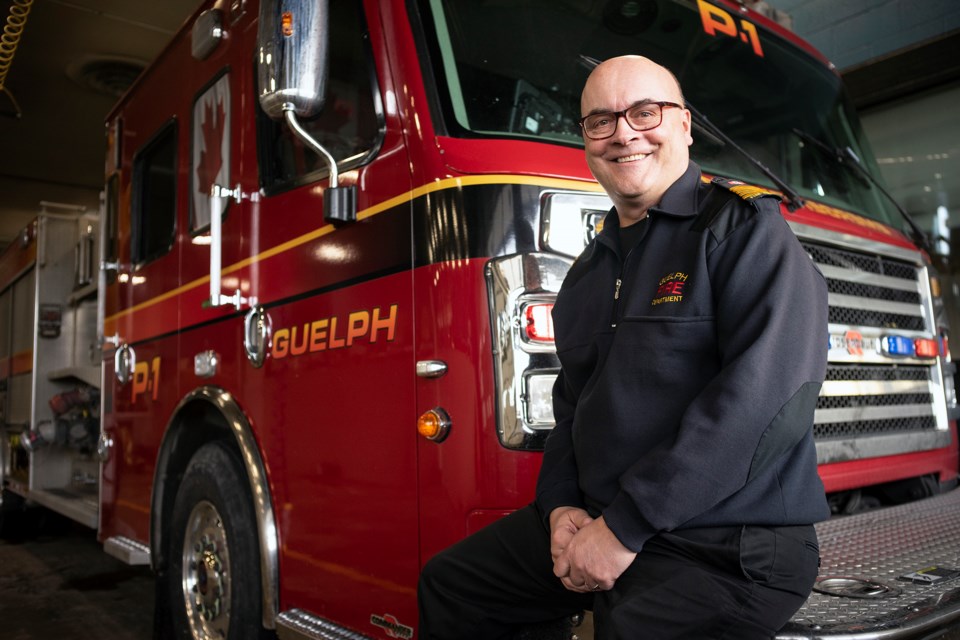 Chief John Osborne of the Guelph Fire Department will retire next month after more serving than 30 years with the organization. Kenneth Armstrong/GuelphToday

More than thirty years have passed since fire chief John Osborne fought his first fire as a member of the Guelph Fire Department. Now facing retirement, Osborne says everything about the job has changed since then, from the equipment to the tactics used to do rescues and even fire itself.

“I’ll miss going to the fire scenes and helping people,” said Osborne in an interview Friday.

Osborne began his career in October of 1989 by splitting his time as a firefighter and dispatcher. He worked his way up the ranks and by the early 2000s held the rank of captain.

After the events of Sept 11, 2001, Osborne was tasked with heading the department’s initiative to develop a hazardous materials team, which was built from the ground up and included training other firefighters and applying for grants for new equipment.

“Once the grant came through, we purchased all of the equipment and there was a training component for that equipment and getting that equipment on the trucks,” said Osborne. “It wasn’t easy, because we also had to talk staff into it, because it was all new and could potentially be dangerous.”

After that two-and-a-half-year initiative was complete, Osborne moved into the training office full time.

“I am a strong proponent of lifelong learning,” said Osborne. “I always want to challenge myself. I would prefer to be involved in change rather than reacting to change.”

At that time the department was training for more specialty operations, like confined space, water rescue and technical rope rescue.

A lot of change was happening in the firefighting industry and Osborne said that was his chance to be involved and influence that change.

“You still need water, boots on the ground and fire trucks to respond,” said Osborne. “Other than that, the way that we fight fires has changed, our tactics have changed, our training has changed over my 30 years, considerably.”

Osborne noted the equipment used by today’s frontline firefighters is much different than what he used three decades ago. Advances in technology have allowed everything to become lighter and less restrictive.

“The bunker gear has changed over the years, it’s getting lighter, not quite as hot or cold,” said Osborne. “All officers have infrared cameras right on their masks, so we are not holding them anymore.”

Data from the suit of each firefighter is now sent back to command wirelessly, including where they are and how much air they have left.

“Ultimately the safety of staff is what we want,” said Osborne.

The rate of cancer for firefighters is much higher than for the general public, noted Osborne. Much more care is taken now to eliminate as much exposure to breathing in fumes than when his career started.

Osborne recalls one of the firefighters who was being replaced when he was first hired was diagnosed with cancer shortly after retirement and died soon after.

“I never forgot that,” he said.

The bunker gear firefighters wear is no longer worn in the fire truck on the way back from an active fire scene, but now stored in a compartment in the truck to be cleaned later.

“After a call, we don’t want bunker gear that has been in a fire to get back on the truck on the way back to the station, because it’s off-gassing the whole time and staff are breathing that in,” said Osborne.

“It comes with the job,” said Osborne. “You have no way of hiding from it — it’s there — so learn how to deal with it and learn how to recognize when it is bothering you and ask for help, because we have the help here.”

The department has created a Critical Incident Stress Management team to help employees deal with the stress of the job.

“We have specially trained firefighters, dispatchers and administrative staff that recognize when something terrible happens, to monitor each other,” said Osborne. “Sometimes it doesn’t have to be something major, it can be something relatively simple that sets a memory off in somebody.”

Even fire itself has changed. Osborne said house fires burn much faster and hotter now because of the contents in modern houses.

As Guelph is growing, the department has had to plan for the future, with its eyes on planned new developments in the Clair-Maltby area and other parts of the city.

As buildings in Guelph get higher and higher the department has also had to train for that and Osborne said the department is expecting a third aerial truck with a 100-foot ladder to be added to the fleet soon.

“When we respond to these high rises — just because the truck is on scene doesn’t mean you’re at the emergency yet. You still have to go up 15, 18, 20 floors. That could take another three or four minutes,” said Osborne. “The bigger these buildings get, the more we have to take that into account.”

Osborne recalls many memorable calls in his career, but most vividly remembers the 2000 chemical fire in the city’s south end.

“I wasn’t working that day but I was covering for another firefighter,” said Osborne. “I was driving the lead truck going to that scene and I remember driving down the Hanlon and seeing the explosions and the flames 150 feet in the air.”

He also remembers the response that same year when a tornado touched down in the city.

“Seeing the police, firefighters and paramedics and everybody doing their job and being professional and polite — that just shows what this city stands for,” said Osborne. It’s about how we can help you and that’s the mantra all three services have. I think the public really appreciates that.”

Osborne said he is proud of the way management and the firefighters’ union has maintained a positive working relationship since he took over as chief in 2016.

“We have a very strong association who are very dedicated and love to be involved in the community and helping out the community,” said Osborne. “We have always been able to secure issues that come up into a win-win situation, instead of a win-lose situation.”

For the first time in a long time, Osborne is facing a life that is not on call when he retires on Feb. 29. He plans to spend more time with family and basically do what he wants, when he wants.

“I want to take four or six months and try not to do anything,” said Osborne. “But if things are offered I can pick and choose.”

Guelph sets local record for average home prices and people are eager to sell
Sep 29, 2020 8:00 PM
Comments
We welcome your feedback and encourage you to share your thoughts. We ask that you be respectful of others and their points of view, refrain from personal attacks and stay on topic. To learn about our commenting policies and how we moderate, please read our Community Guidelines.