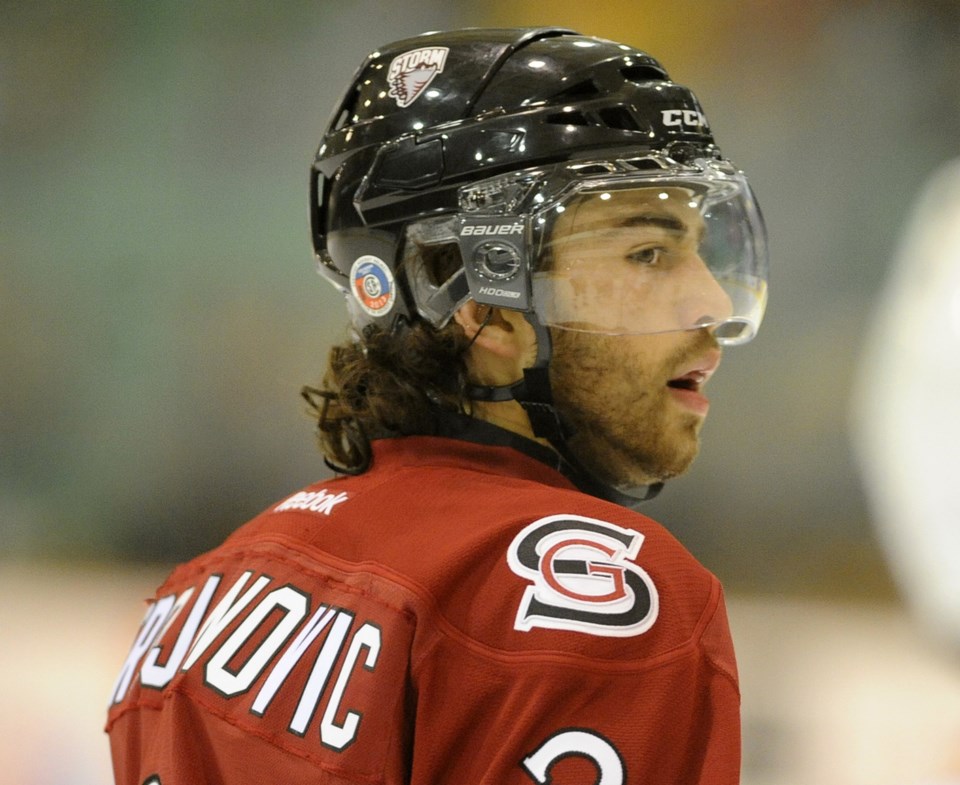 Steven Trojanovic faces a number of charges after a car that hit a pedestrian fled the scene in Kingston Monday night. OHL Images photo

Former Guelph Storm player Steven Trojanovic faces a number of criminal charges after a woman was hit by a car in Kingston Monday night.

Const. Steve Koopman, of the Kingston Police media relations department, said that around 7 p.m. just north of downtown Kingston a Mazda 3 struck a 19-year-old pedestrian from behind as she was walking on the sidewalk. The vehicle briefly stopped at the scene before leaving, almost striking another pedestrian in the process.

Koopman said the car then did a rough circle on several side streets during which the car struck the fence of a residence before again leaving the scene.

After striking a vehicle on another side street, the car came to a stop and the lone occupant of the Mazda 3 fled on foot, Koopman said.

He said a witness who had seen what happened flagged down a passing Kingston Police cruiser and pointed out the suspect, who was arrested without incident.

The suspect was administered a breathalyser at the police station where Koopman said he blew three times the legal limit.

The officer said that because of the seriousness of the incident, Trojanovic was held in jail overnight and was released on bail following a court appearance the next morning.

The injured pedestrian was taken to hospital. Her condition was not known but Koopman said he believed it was not life threatening.

Trojanovic was charged with impaired driving, over 80, two counts of failing to stop at the scene of an accident and dangerous driving.

A Burlington native, Trojanovic played 81 games for the Guelph Storm in the 2013-2014 season, helping them make it to the Memorial Cup final. Previously he played in the league for the Peterborough Petes and Windsor Spitfires.

Trojanovic is scheduled to appear in court on March 17.

UPDATE: Two new COVID-19 cases confirmed in Wellington County
May 25, 2020 1:30 PM
Comments
We welcome your feedback and encourage you to share your thoughts. We ask that you be respectful of others and their points of view, refrain from personal attacks and stay on topic. To learn about our commenting policies and how we moderate, please read our Community Guidelines.