Get ready to slurp Guelph

Crafty Ramen is bringing the ramen noodle craze to downtown Guelph
Oct 8, 2016 9:00 AM By: Troy Bridgeman 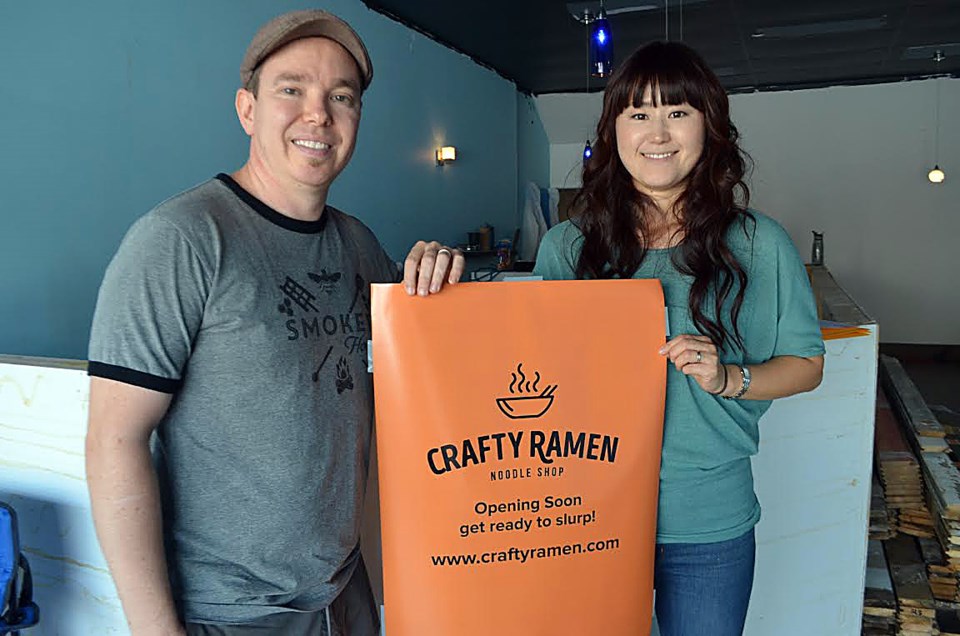 After nearly half a decade at sea, Jared and Miki Ferrall have decided to drop anchor in downtown Guelph and open a ramen noodle shop.

“When we had enough of living on the boat we just sort of sat down and said ‘what do we want to do’ and coming to Guelph made sense,” said Jared. “We’ve always had a passion for restaurants and it seemed like a good place to start a restaurant and also we both love ramen.”

They are hoping their shop Crafty Ramen will help to spread their love of ramen noodles to the people of Guelph.

“It is a big craze in Japan where they have like 35,000 ramen shops,” said Jared. “There are 30 shops down in Toronto now and it has blown up all over the west and we’re just bringing the first one to Guelph.”

To ensure the quality and authenticity of Crafty Ramen’s service and selection they imported a noodle maker from Japan.

“It’s a custom-made noodle machine made by a mom and pop fabricator in Shinagawa,” said Jared.

Renovations are underway to get the location, formerly occupied by Sapphire Café and Lounge at the corner of Macdonell and Wilson Streets, ready for business by the middle of November.

Settling in Guelph and starting a business is a big lifestyle change for the couple.

“Miki and I have been traveling internationally for a while living and working on a yacht,” said Jared. “I was the private chef and Miki was the chief stewardess.”

Jared was born in Ontario but has spent most of his life abroad.

“When I turned 16, I started heading out into the world, traveling, moving and working around,” he said.

He and Miki have been married for nine years.

“We met 10 years ago in Vancouver,” said Miki. “I am from the north part of Japan from a place called Iwate Prefecture.”

They lived in Japan for four years after they were married.

“I was a chef there and Miki ran English schools,” said Jared. “Originally we were going to start a business in Japan and I went off to sea to save money to get the business going.”

Miki eventually joined up with him but they held on to their dream of starting their own business.

Jared’s father and four brothers live in Guelph and after a number of family visits the couple developed a fondness for the city.

“When we decided we wanted to settle down after spending years moving around we thought what better place than Guelph,” said Jared. “The more we looked at it the more we loved it.”

They have developed a full menu of traditional meat and vegetarian ramen noodle dishes and will have Sapporo and local craft beers on tap.

Jared hopes their customers will embrace the tradition of slurping up the noodles.

“Slurp it up,” he said. “That is the beauty. You have to slurp it because when you are eating it you want to suck up the broth.”

“Yes,” said Miki. “But we will provide spoons for people that don’t want to slurp.”