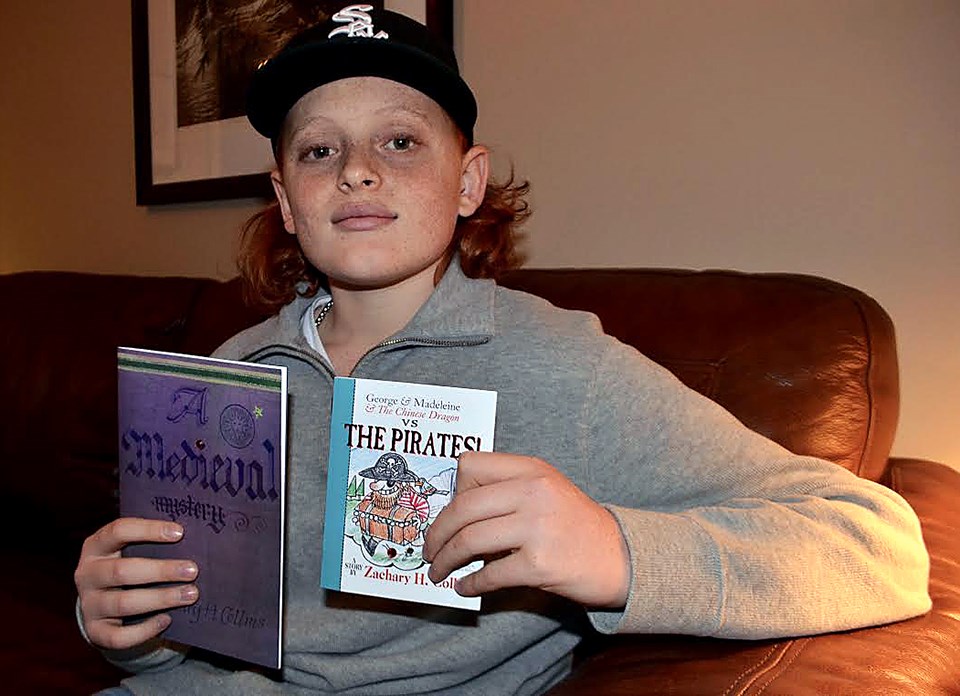 The body of a murdered woman has been found in the woods outside Moontown, Maine, and two misunderstood teens are the prime suspects.

The only person who knows the true identity of the killer is 13-year-old Guelph author Zachary Collins.

“It’s a mystery,” said Collins. “The one who is talking all the time, you never learn his name and the second one is named Johnny.”

Johnny and his enigmatic friend are the main characters in Collin’s most recent novel Murders in Maine. The e-book just came out and is available on Amazon, Indigo and Barnes and Noble. The hard copy is set for release next month.

All proceeds from book sales will go to Free the Children an international charity that promotes literacy and children’s education.

Collins decided to support the charity after hearing co-founder Mark Kielburger speak at a We Day presentation in 2013.

“When I came home I was inspired to raise money some how,” he said. “There are many different ways and we just thought about these books I’d been writing.”

Collins started writing when he was eight years old.

Using his writing skills to help children in developing countries learn to read has motivated Collins to keep coming up with new stories.

“This concept of mixing your passion with charity is a really big thing,” said Collin’s mother, Meghan Kirwin.  “Zachary knows that education is the one thing that can free children.”

He has already raised $10,000 from donations and sales of his first two books Medieval Mystery and George & Madeline & The Chinese Dragon vs the Pirates.

“The difference this time is we a re going though a publisher,” Kirwin said. “Her name is Janet Aizenstros and the company is Love and Lifestyle Publishing Group. They are out of Toronto but she is from Guelph and has been fantastic support for Zach.”

He has a book tour scheduled for the spring that will take him through New York, Massachusetts and Maine and he has already started working on the sequel to Murders in Maine. It’s called Conspiracies in California and features the same two teen characters caught up in another mystery.

His mother describes him as a modest kid but he takes a lot of pride in his work and that his writing is helping to improve the lives of others.

As for a career as an author – that chapter has yet to be written.

“It’s a big joy for me but I haven’t really thought a lot about my future,” he said. “But it is definitely up there in the top five for sure.”

Opioid crisis claimed at least 23 lives locally in 2019
Feb 24, 2020 1:30 PM
Comments
We welcome your feedback and encourage you to share your thoughts on this story. We ask that you be respectful of others and their points of view, refrain from personal attacks and stay on topic. To learn about our commenting policies and how we moderate, please read our Community Guidelines.