All profits from Garth Laidlaw's special piece of artwork is going directly toward Australian charities
0
Jan 9, 2020 9:00 AM By: Anam Khan 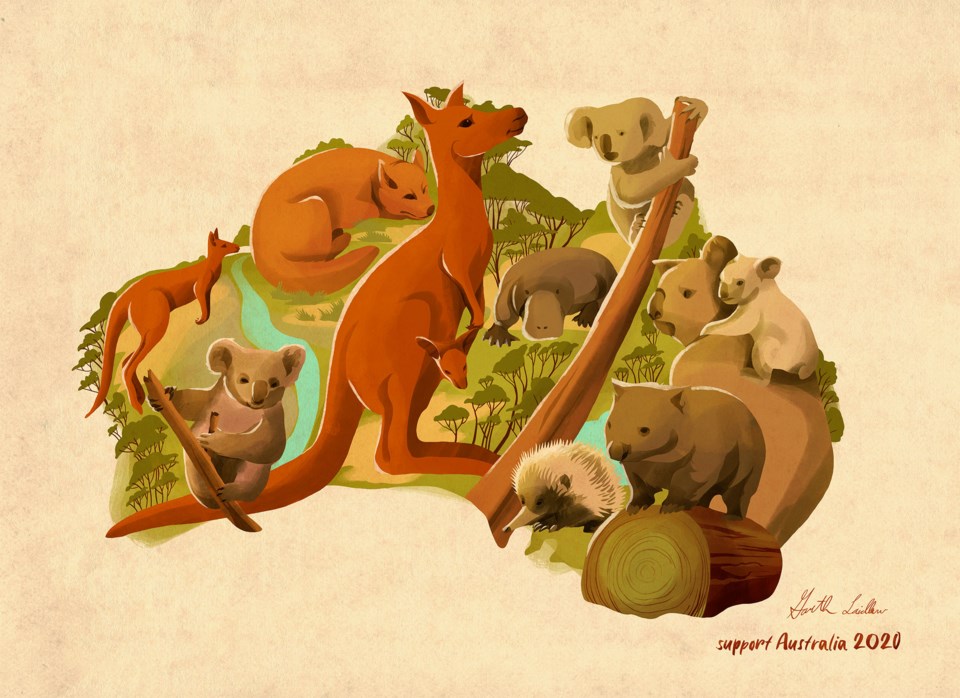 Guelph artist Garth Laidlaw is using his talent as a practical tool to help people animals in Australia.

“I think many artists feel isolated and separated because we don’t do anything practical in terms of literally putting out the fire or anything like that, but there are things that an artist can do,” says Laidlaw.

Last week, Laidlaw created a digital illustration that depicts a map of Australia covered with animals lost to the wildfires, such as a dingo, kangaroo, koala bear, platypus, wombat and the echidna.

“What I’ve learned from posting this image on Monday is that my social media has kind of exploded,” says Laidlaw, who is selling 11-by-14 inch and 18-by-24 in prints on his website.

"I have been increasingly feeling like i should migrate my business to be supporting social causes and this was a good opportunity to do that,” says Laidlaw, adding that he feels artists can play in an important role in healing after horrific events that take place around the world.

“I was specifically upset about the sheer amount of wildlife that died from the bushfires,” says Laidlaw.

Approximately half a billion animals have been affected by the fires in New South Wales and millions of them have already died.

“It's that kind of number that’s hard to even imagine what it even looks like,” says Laidlaw.

When Laidlaw shared his work on social media Monday, 20 prints sold in the first two days.

Laidlaw has been selling his artwork online for years. He also illustrated and wrote a children’s book called Sayni and the Windowjet Brothers.

“My skills are at a point where I can start to make things that people want,” says Laidlaw.

“It’s a good reassurance that I have a feel in my artwork that people like and want to purchase.”

Laidlaw says he feels that images tend to be more effective in conveying a message when they are beautiful as opposed to when they are trying to give information.

“I think if the artwork looks nice, it always ends up communicating well,” says Laidlaw.