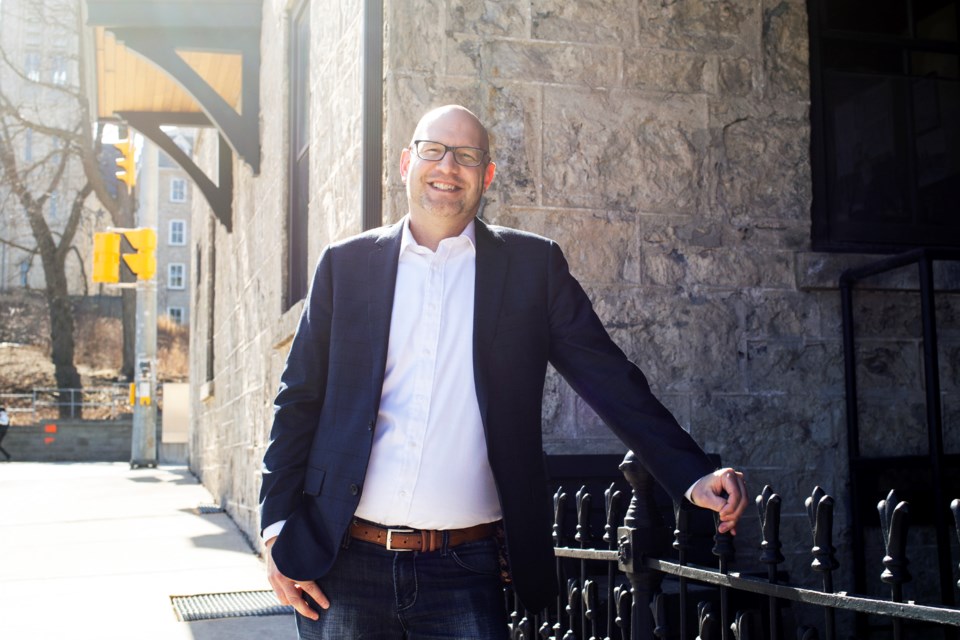 Derek Matisz has declared his intention to run for the Guelph nomination for the Conservative party. Kenneth Armstrong/GuelphToday

Up until a year and a half ago, Derek Matisz couldn’t imagine running for the local Conservative nomination in the upcoming federal election.

“I had a fairly bad stutter, so I always thought I couldn’t be that guy — I couldn’t stand up there. I would try to give a speech and words wouldn’t come out,” said Matisz. “In my mind I would say something perfectly and someone would give me this look and realize it was because I stuttered.”

Having a lifelong stutter was a challenge, said Matisz, but he said it also came with a blessing.

“It allowed me to develop a lot of skills, a lot of smarts and humour,” said Matisz. “It’s also been a source of strength, but at the time I didn’t see it that way.”

Matisz went through a number of different therapies with a goal of running for political office.

Now Matisz is the first of three people running for the Conservative nomination to publicly declare his intentions.

A date to select the local Conservative candidate has not yet been announced.

The federal election is Oct. 21.

“I have been vetted, I am ready to go. Our nomination race should be called at some point soon, I hope,” he said.

Although they have not yet been named, Matisz acknowledges he probably doesn’t have the name recognition of the other two prospective candidates.

“A big name can definitely draw people, but there’s also baggage attached to it. I am a small name, but I will make a big impact,” he said.

Matisz recently began going door to door to deliver his message of change. He hopes Guelph will go Conservative blue for the first time since Bill Winegard won the riding in 1988.

He remembers sitting in his Grade 8 class at Taylor Evans Public School when Brenda Chamberlain won the next election in 1993, turning Guelph Liberal red. Guelph has voted Liberal in every federal election since.

“It has definitely been a very odd time here for a life-long Conservative, constantly hearing we are the second party and have no hope here,” said Matisz.

He said the response he has heard at the doors so far is an appetite for change from a Liberal government that has become more negative than promised when elected in 2015.

It’s tragic to watch how the Liberals have managed the SNC-Lavalin affair, said Matisz.

“The truth should be out there. Shutting down commissions just seems like something is being hidden and not being managed in the proper way,” he said. “The positivity and hope people had, that inspiration, is gone. People just don’t trust our government right now.”

Matisz also doesn’t feel like Guelph’s current Liberal MP Lloyd Longfield is right when he recently told GuelphToday it is not up to backbench members to call for an investigation into the conduct of the Prime Minister’s Office.

“Any member of parliament should be there to hold the government accountable, whether it’s your party or not. That is your role. I think that is something we need to remember. The rule of law really matters,” he said.

A life-long Guelphite, Matisz attended GCVI before attending Wilfrid Laurier University for  political science and history. He received his master’s at U of G in public policy and public administration.

Matisz is senior vice-president of platform operations at Maru/Matchbox, a consulting firm that he says uses public opinion data to solve problems for companies.

The Maru part of the company name comes from the Kobayashi Maru training exercise featured in Star Trek, which is considered an unsolvable problem that can only be figured out by changing the rules.

“That’s how our company likes to think about problems, it’s all about the way you attack it — there is always a way to solve something, it’s just looking at it from the proper angle and asking the right questions,” said Matisz. “My entire why in life is trying out new things and continually learning so I can help people to lead a better life. I think that is missing in Guelph politics.”

Matisz sees Canada’s current debt levels as one of the problems he would like to see solved.

“We are at a spot now where we spend and spend, but that rainy day is coming and we are going to be in a difficult spot,” he said.

Matisz said he is excited to get going on the campaign if he is able to secure the Conservative nomination in Guelph.

“It’s a city I love, a city I want to be a part of and I think now it’s finally time for it to go blue again because the liberalism that was voted for this time hasn’t panned out and I feel the catalyst for change is there,” he said.

Rotary's Indigenous Awareness Committee offers learning opportunities to the public
Sep 24, 2020 7:00 PM
Comments
We welcome your feedback and encourage you to share your thoughts. We ask that you be respectful of others and their points of view, refrain from personal attacks and stay on topic. To learn about our commenting policies and how we moderate, please read our Community Guidelines.