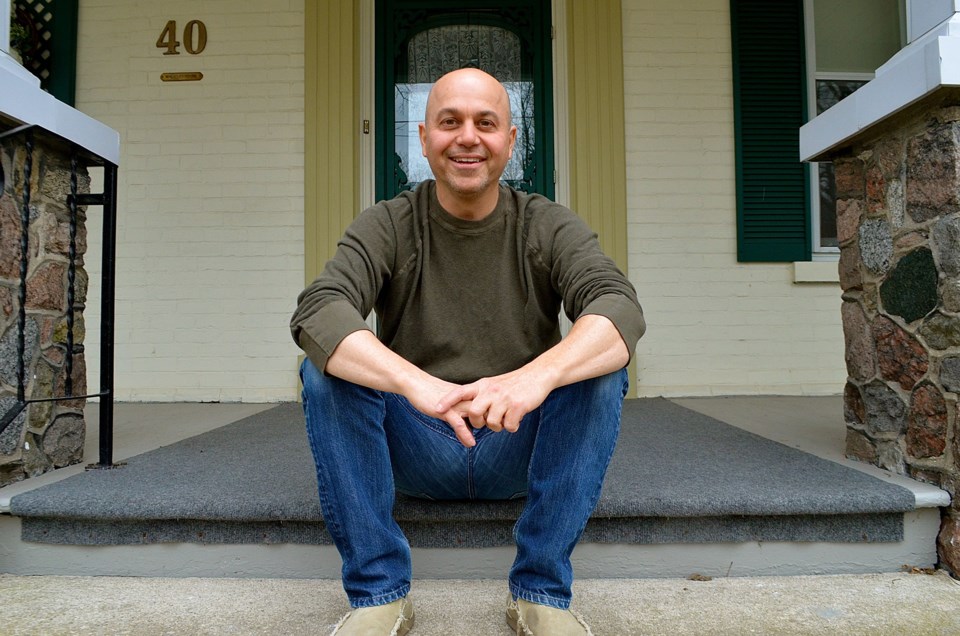 Guelph author and comedian Alan Watt has waited a along time to write and direct his first feature film and to celebrate he having a private screening for investors of the film and close family and friends on Saturday at the Gorge Cinema in Elora.

“I am really excited to see it on the big screen for the first time,” said Watt.  “We literally just finished the sound mix a week ago and I got the DVD from my producer about 18 hours before I came to Guelph.”

Watt plans to enter the film, Interior Night, in the festival circuit including the Toronto International Film Festival.

“That’s kind of a dream come true to bring my movie back to Toronto where it all started,” he said.

“It’s about four characters who, over the course of one night, are forced to confront their secrets,” said Watt.  “It’s about hitting bottom.”

He drew inspiration for the film from his own life experiences.

“It’s not autobiographical but it is very personal to me because there was a time in my own life when I was really struggling and hit some kind of bottom,” he said. “It is a dark comedy drama about how our secrets keep us tethered to the past.”

Watt was born in 1965 in Aberdeen Scotland, the third of four siblings. He moved to Guelph with his family in 1970 when his father, a psychiatrist, got a job at the Homewood Health Centre.

“He was a quiet boy,” said his mother Olga Watt.  “He was very creative and always thinking.”

“I was a stand-up comic for 15 years,” he said. “I was headlining clubs in Canada and the US. I did all those TV shows and the Montreal Comedy Festival.”

In 1995, he landed a part on Seinfeld in the Chinese Gum episode where he played a theatre attendant that sells Kramer a rancid hot dog that makes him sick.

“I tell you, if you are going to do one TV show for residuals that is the one because that was 20 years ago and I still get a little paycheck from them every three months,” said Watt.

He moved to New York and started writing screenplays.

“I was doing stand-up at night writing screenplays during the day and then I moved to LA and wrote this novel.”

He adapted his novel Diamond Dogs for film and is planning to direct it next year.

“We shot Interior Night it in 14 days last May,” said Watt. “We got fantastic actors.  They were all willing to work for virtually nothing because they really liked the script.”

Streit enlisted the help of some of his brightest film students from AFI to help with the film.

“They were young and hungry and really talented people,” said Watt. “The movie looks far better than it deserves to look for the budget we shot with.”

The private screening at the Gorge Cinema in Elora starts at 4pm on Saturday.