Kendra Fisher is a member of Canada's national inline hockey team and an advocate for mental health and suicide prevention
Mar 20, 2018 9:45 AM By: Kenneth Armstrong 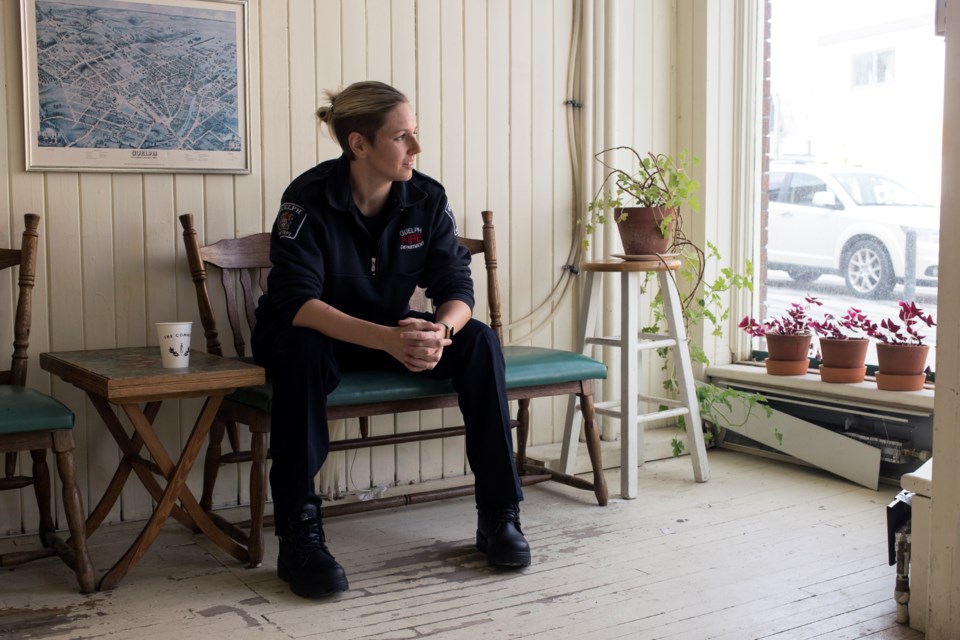 Kendra Fisher is a member of Canada's national inline skating team, a mental health advocate and a recent recruit of the Guelph Fire Department. Kenneth Armstrong/GuelphToday

A former Team Canada ice hockey hopeful and current goaltender of of the national women’s inline hockey team, Kendra Fisher recently began a new career as a firefighter with the Guelph Fire Department at the same time her company is launching a mental health initiative.

Training to be a firefighter and applying for funding for her company Mentally Fit each took years of work, but somehow both came to a head in recent weeks, said Fisher.

Fisher did not have any ties to Guelph prior to being hired at the department, but she has played here a number of times during her sports career.

"Never for the home team," she quipped.

Growing up in Kincardine, Fisher chased her love of hockey, playing with the boys’ teams right through to midget AAA.

Joining the fire department, said Fisher, is just like joining another incredible team.

“What an opportunity, to be a part of what very much is a family environment and find where I can fit into that unit. Hopefully I can add to it and be a part of developing and learning more about helping others and what opportunities first response gives me,” she said.

“I think they figure they have an extra goalie around now if they need me,” she quipped.

Fisher said her superiors in the department have shown a great deal of support around her work in mental health, which she intends on continuing.

“I just feel there will be a lot of room for cross-overs here in Guelph that align with everything else I do in my life and I am excited for that opportunity,” said Fisher.

Fisher became an advocate for mental health about 10 years after her own struggle sidelined her promising ice hockey career in 1999.

Fisher says she was coping in silence about 10 years, but that all changed in 2010 when 14-year-old Daron Richardson, the daughter of former NHL defenceman Luke Richardson, died by suicide.

With a goal of one day joining Team Canada, Fisher moved to Toronto with one year of high school left so she could play on women’s teams.

Soon after graduating, Fisher was in a car accident that left her with a broken vertebra. She spent that summer with therapists and doctors and her injury improved. However, it wasn’t long before “something else just started to feel off.”

About to fly to Calgary for Team Canada training in 1999, Fisher said it was at a time when “every single day, I felt like I was dying.”

She called her parents, and her father flew to Calgary to be there when Fisher arrived.

When she got to the airport in Toronto, she hid in the washroom until it was time to board.

When she stepped onto the ice in Calgary, Fisher took her spot in net. Nobody realized under her mask tears were streaming down her face.

Overcome with anxiety, she told her coach a whopper, saying her grandmother lived in Calgary and had just been rushed to the hospital. She simply needed an out.

Fisher headed to the hotel, got to her dad’s room and, for hours, “just sat there trying to figure out what was wrong.”

She and her dad then met with the coaches to explain what she was going through and she quit Team Canada trials that day.

Ashamed of her diagnosis, for years Fisher perpetuated a lie that she stopped playing at the national level because of a back injury.

It took Fisher about five years learning to cope with her illness and to get to a place where she considered herself healthy.

Still, she dealt with the illness in silence, with very few people knowing the truth.

Then in 2010, Fisher was handed a notice about a memorial service for Daron Richardson. The 14-year-old hockey player had taken her life.

“After Daron killed herself, I really realized the detriment to my silence. I felt like I was a part of the problem,” said Fisher.

“I realized there was such a fault in me hiding that. There are so many people out there that don’t know that there is help, they don’t know that we can work with people to find a way to achieve recovery. It became very important for me to not allow myself to make that mistake anymore.”

For almost 10 years, Fisher has been doing public speaking and one-on-one counselling in the field of mental health and suicide prevention.

The goal, said Fisher, is not to reinvent the wheel, but to create a network with existing supports.

“I can’t bring 10 psychiatrists to the area tomorrow, but what I can do is teach the other 20 ways we can help ourselves while we are waiting for access to those people. Hopefully by doing so, we can come at it from another angle,”  said Fisher. “My focus became helping those people learn how to, for lack of a better way to say it, tread water until help is available.”

“I am hoping very quickly it’s going to be something that can be replicated in all rural communities in the immediate future,” she added.