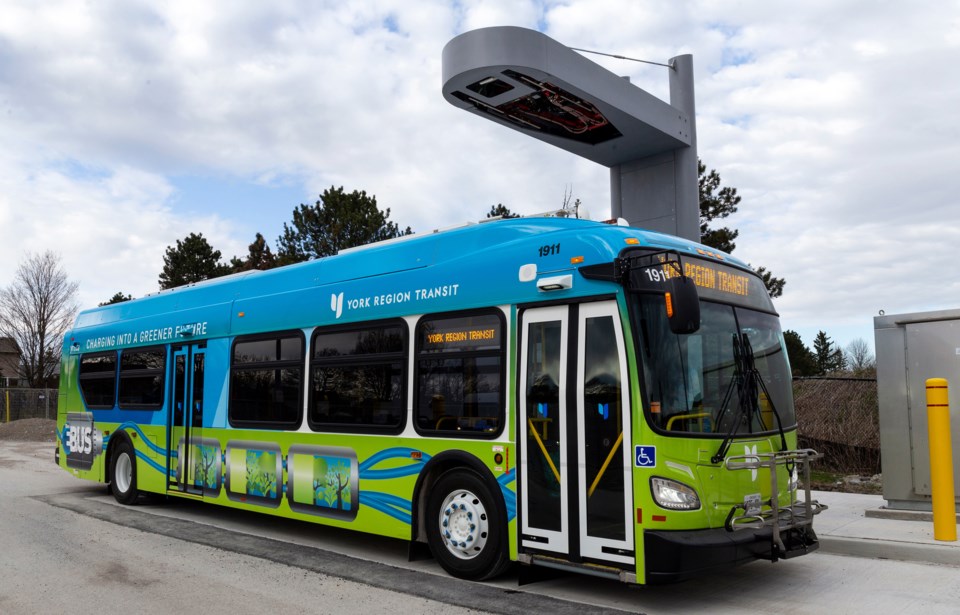 With an eye toward reducing greenhouse gas emissions and the potential for operational savings, several Ontario municipalities, including Guelph, have started down the path toward electrifying their bus fleet.

They’re all at different stages of the process – none are completely there yet. Toronto Transit Commission (TTC) is the furthest along. With 60 electric buses, it has the largest such fleet in North America, as well as several “clean diesel” and hybrid buses.

This sets the stage for what has been casually referred to as an electric bus pilot project, though no date has been set to have electric buses on the road.

“That certainly constitutes leadership in Canada. A lot of the medium-sized municipalities, they’re showing interest but there’s still a lot of risk aversion and uncertainty around a quickly evolving technology, knowing there are expected cost savings but not actually having a lot of data to show that those will actually materialize,” Joanna Kyriazis, senior policy advisor for Clean Energy Canada told GuelphToday.

“Guelph is an example of a medium-sized city that’s forging ahead. It’s doing what it knows is the right thing.”

Benefits of electric buses over diesel are said to include eliminating greenhouse gas emissions, reduced maintenance costs – they have about 60 per cent fewer moving parts – and noise reduction. The additional cost of buying electric buses, about 30 per cent, and needed infrastructure are among the drawbacks.

Along with Toronto, other major Canadian cities leading the bus fleet electrification charge include Edmonton, Montreal and Vancouver.

Like Guelph, many municipalities have pledged to eliminate, or drastically reduce, their greenhouse gas emissions in the decades to come and are taking steps in that direction. Guelph’s council-approved goal is to get all city facilities and operations to use 100 per cent renewable energy by 2050. As it is right now, nearly a quarter (23.6 per cent) of the city’s energy use is from renewable sources.

Diesel vehicles, primarily the bus fleet, account for more than a quarter (25.7 per cent) of all municipal energy consumption. Converting it to a renewable energy source such as electricity would go a long way toward achieving the stated goal.

Additionally, the city’s bus fleet emits 6,725 tonnes of CO2e per year, about 35 per cent of total greenhouse gas emissions from the municipality.

“We are currently in the design process and are aiming to install the chargers next year,” explained Bryan Yo-Han, the city’s manager of corporate energy and climate change, in an email.

“Once the detailed analysis is completed, we will be able to better identify the quantity and timing of the electric bus purchase,” Yo-Han noted.

Those chargers can handle three or four buses each, one at a time, meaning there’s potential to accommodate up to 16 electric buses. The current staff plan is to replace diesel buses with electric ones as their lifecycle ends.

Six electric buses hit the streets of Newmarket, part of Durham Region, in late June, with plans and funding in place to buy six more next year. Municipal staff will be recommending a bus replacement schedule to council next month that, if approved, would see the fleet completely electrified by 2047 or sooner.

“People in general, both travellers on our bus and people in the community, are very interested and engaged and what’s going on in the electric buses,” commented Ann-Marie Carroll, general manager for York Region Transit (YRT). “I think people very much appreciate we’re looking at green technology.”

It’s not known what the cost of electrifying the complete YRT fleet will be, she explained, noting the price of electric buses is dropping in the United States, where they’re in greater use. She expects those price decreases to come north.

The initial six were bought for $7.2 million. They’re projected to result in $20 million in savings over a 30-year span, thanks to a 30 per cent drop in maintenance costs and a decrease in fuel/energy expenses.

“We weren’t sure how the bus drivers were going to like the electric bus, but we’ve had very positive feedback from them,” continued Carroll.

Driver response, she noted, includes enthusiasm about the drastically reduced noise from the propulsion system and that it responds to their movements in essentially the same way a diesel bus does.

There is, however, “a big learning curve” for both drivers and maintenance staff. That curve stems mostly from a technology standpoint, making sure everyone is familiar with the equipment and can confidently, and safely, operate it.

Under the current technology, electric buses have a range of about 300 km. But that range is impacted by weather conditions, weight of ridership, route topography and more.

In addition to the lessened environmental impact and reduced noise, another major benefit to having electric buses on the street, Carroll shared, has been the opportunity to educate the public about what other environmental initiatives the municipality has on the go.

Steven Petric, chair of Transit Action Alliance of Guelph, applauds the city’s efforts toward bus fleet electrification. With a long road ahead, he’s pleased to see the process begin.

“It’s definitely baby steps, getting our fingers in there and kind of rolling as we go,” Petric said, referring to the purchase of electric bus chargers. “Let’s get those tests (electric buses) out … and go from there.”

Mass transit ridership is way down since the start of the pandemic. Bus ridership in Guelph is about half of what it traditionally has been, states a recent staff report.

“Even despite COVID, most of those transportation agencies are staying committed to that general move toward electrification, even if particular dates may be pushed back a little bit,” said Kyriazis. “We were relieved to see municipalities sticking with their commitments.”

Ratified: Electric bus chargers, pedestrian bridge, call for COVID-19 community cash
Sep 28, 2020 9:22 PM
Comments
We welcome your feedback and encourage you to share your thoughts. We ask that you be respectful of others and their points of view, refrain from personal attacks and stay on topic. To learn about our commenting policies and how we moderate, please read our Community Guidelines.