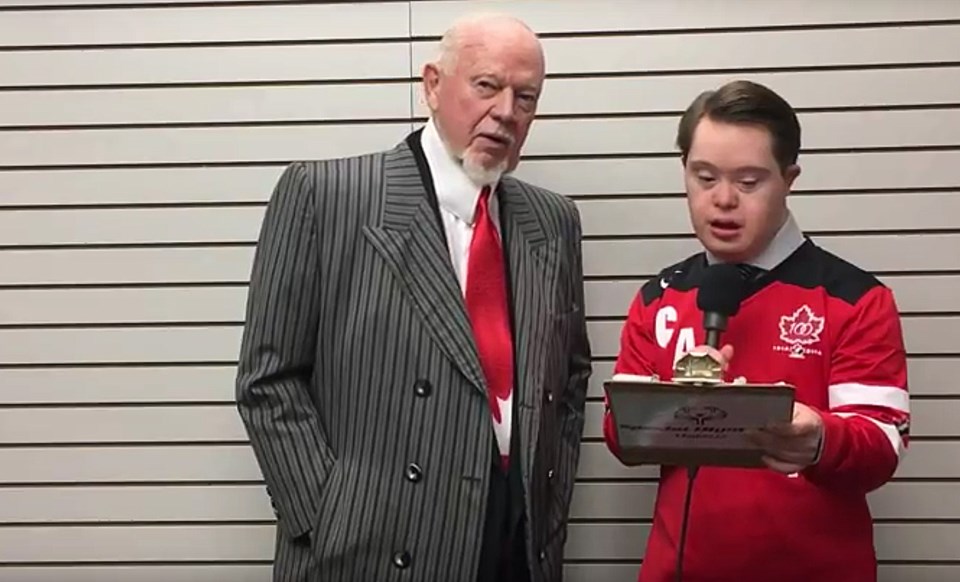 Guelph Special Olympian Taylor Redmond has garnered quite a bit of attention in Guelph as a noted interviewer of sports stars, many of which are on his BossTaylorRedmond YouTube channel.

While he usually focuses on athletes such as Guelph Storm players, Guelph Gryphon football players, he got to kick it up a notch recently by interviewing one of his idols, Donald S. Cherry.

“It was very exciting to meet Don Cherry. I knew it was going to be a great interview because we both love hockey," Redmond said of the experience.

"I watch Coaches Corner every week and love the Leafs and the Storm," he said.

Cherry was in town to take part in the Canadian Hockey League Top Prospects game at the Sleeman Centre.

Redmond had reached out to him via email to ask him for an interview.

"I would like to interview you for the Gryphon radio station CFRU 93.3 FM when you come to the Top Prospects Game in January.

"It would be a big honour and I would be really happy to meet you. We both love hockey and like to do charity work and I like it when I help others," Redmond wrote in his email.

Redmond has done over 40 interviews in the last couple of years, including Toronto Maple Leafs defenceman Jake Gardiner and a host or Guelph Storm players.

"They are up on my BossTaylorRedmond YouTube. My name is Bosstaylor because I love Bruce Springsteen and his music," Redmond explains

"He got back to us right away and said he'd do it," Steve Redmond said.

Taylor has been a Special Olympic athlete for many years in a variety of sports and has also done much volunteering.