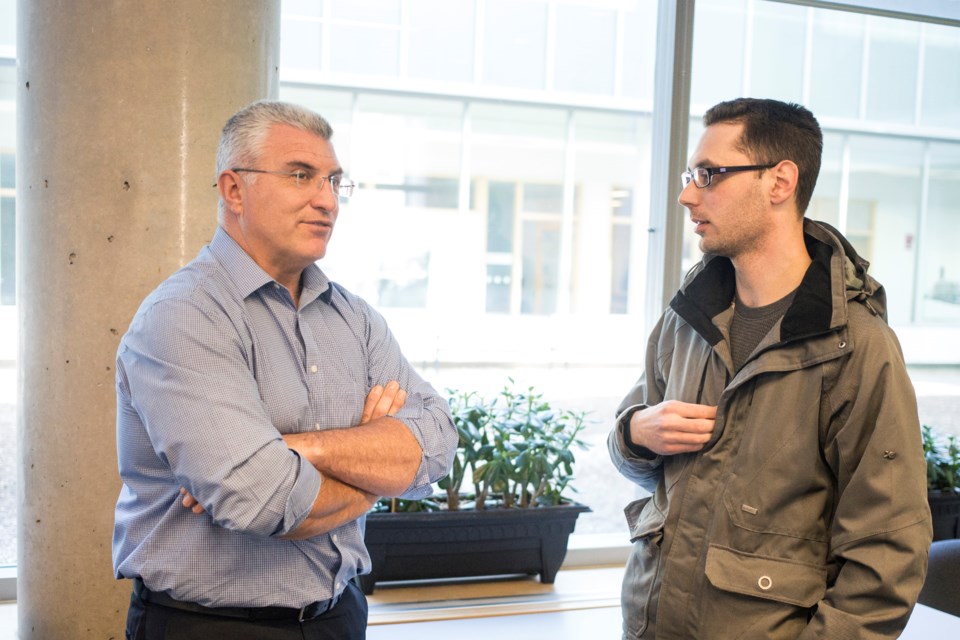 Dave Wiedrick, bylaw manager for the city of Guelph, and Andrew Plawiuk of Red Top Taxi speak immediately after an open house Monday at City Hall. The city of Guelph is currently reviewing the current taxi bylaw. Kenneth Armstrong/GuelphToday

The public is invited to two open houses at City Hall this week to offer input into a new bylaw being drafted to oversee vehicles for hire in the city, including taxis and ride sharing services like Uber.

About 30 local taxi drivers, owners and managers met with officials at City Hall on Monday morning to share their concerns about ride sharing companies like Uber not being on a level playing field.

“We have no issues with competition and them operating, but any company that performs the same job as a taxi needs to meet the same safety requirements for public safety,” said Plawiuk.

Taxi drivers need to provide a criminal background check to receive a taxi license in Guelph and must submit a driver’s abstract once a year. The taxi cars must pass a safety check twice per year.

“We think the criminal background checks, the driver’s abstract and the vehicle safeties are the bare minimum that any company wanting to transport the public needs to abide by and it should be regulated by the city,” said Plawiuk.

A spokesperson for Uber said Tuesday that vehicle inspection is required to be completed by a certified mechanic before being approved to drive on the platform.

Drivers must also pass a criminal background check by an Ontario police service that has to be renewed annually.

Many of the stakeholders at Monday’s meeting would like to see the city put in charge of those screenings.

Dave Wiedrick, bylaw manager for the city of Guelph, said the public engagement sessions are an important way to gather information when overhauling a bylaw like the one that governs taxis.

“People want to be safe when they take a taxi,” said Wiedrick.

During the open house, some drivers felt ride sharing services should be made to charge the same as taxi services in the city and not be allowed to charge a premium 'surge price' when demand is high.

Although still in the information gathering stages, Wiedrick expects a new Vehicle for Hire bylaw to be drafted that oversees taxis, limousines and ride sharing services like Uber.

A working group was struck with various community stakeholders — including taxi companies, taxi drivers and people who hire them.

The working group went over the existing taxi bylaw line by line to determine what was applicable and what was not.

The contentious issues, said Wiedrick, were put into an online survey run by the city.

Many drivers at Monday’s meeting were unhappy with the survey, which was available online, because they felt it skewed the results in favour of ride sharing companies.

University students are more likely to engage in online surveys and use ride sharing apps, the drivers charge.

“The senior population that is not as computer literate or doesn’t have as much access to computers — a lot of the bread and butter of the taxi industry is not represented in this kind of survey,” said Plawiuk.

Wiedrick said the public can also express their opinion at one of two open houses at City Hall — one at 6:30 p.m. Monday and a second on Thursday at 6:30 p.m.

Both meetings are to be held on the main floor, Room 112.

Another issue for drivers and cab companies, said Plawiuk, is enforcement.

“You can talk about new bylaws and how it’s all going to be regulated, but if the bylaw officers don’t have the tools or the ability or the will to actually enforce these bylaws then how much is it worth. It’s great having bylaws, but it’s just on paper until it’s actually enforced,” said Plawiuk.

Wiedrick acknowledged it is difficult for bylaw officers to enforce existing bylaws against Uber drivers because they are not legally considered to be taxi cabs.

Plawiuk said not everyone appreciates the lengths taxi companies go to keep them safe.

“Some people think a car is a car and get in. They don’t realize how stringent the safety regulations are and how important it is to make sure the person who is driving you is safe and qualified and that the vehicle you are in is safe,” said Plawiuk.

“We’re transporting your kids, your brothers, your sisters, your mom, your dad and your grandparents. The safety of the passengers has to be at the forefront of these discussions,” he added.

Editor's note: an earlier version of this story incorrectly stated Uber's criminal background checks and vehicle certifications were completed by an Uber Greenlight Hub. This information has been updated in the above article.

Local Public Health has protocols in place to protect against coronavirus
Jan 24, 2020 10:01 AM

Restaurant break-in suspect made a sandwich, left with bagels and bread: Police
Jan 24, 2020 9:54 AM
Comments
We welcome your feedback and encourage you to share your thoughts on this story. We ask that you be respectful of others and their points of view, refrain from personal attacks and stay on topic. To learn about our commenting policies and how we moderate, please read our Community Guidelines.