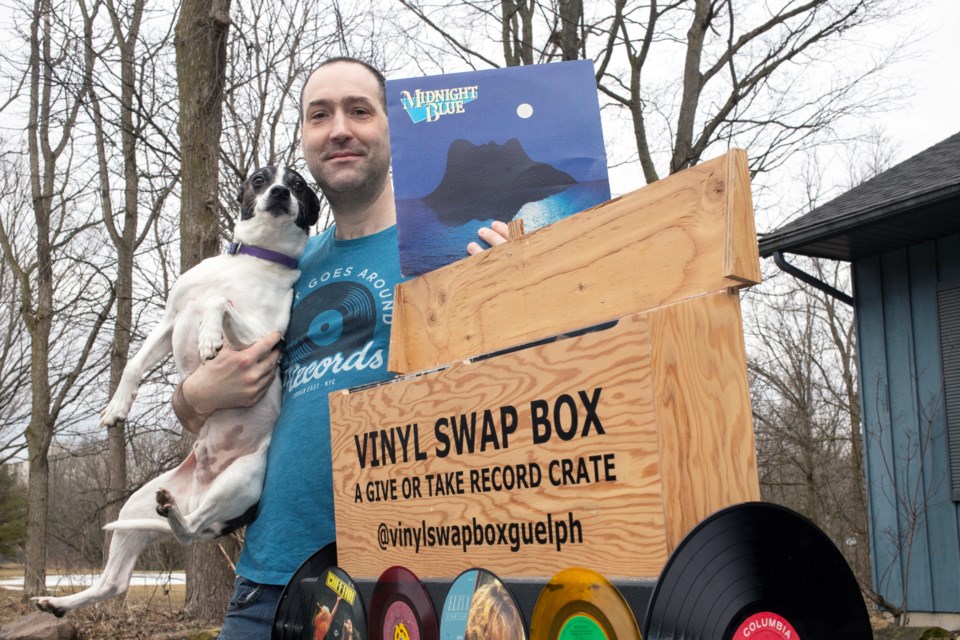 Nick Anbeek (and Henry) pose next to the Vinyl Drop Box, a community initiative that allows people to take and leave a vinyl record for free. Kenneth Armstrong/GuelphToday

Located in front of a house on the dead end portion at the far north end of Artur Street, the Vinyl Swap Box is a fun community initiative with no rules, says owner Nick Anbeek.

Anbeek first put the box in front of his home at 252 Arthur St. N. in the fall. He was inspired by a similar box he read about in Toronto, which itself was inspired by the Little Free Library movement.

“He put it out front of his recording studio in Leslieville and got a lot of press in Toronto. I just thought it was a cool idea,” said Anbeek of the Toronto box that inspired him. He enlisted the help of friends to build the box and its stand and filled it when it first opened.

“When we first put it out we put a few records in it just to seed it, but other than that it’s just been people filling it,” said Anbeek. There’s always a good number of records in there, it’s never empty.

On the weekend, Anbeek dug the box out of its winter home in the basement and put it back in front of his house adjacent to Wolfond Park.

Anbeek said he will sometimes put in a duplicate record from his collection or something he isn’t interested in keeping, but mostly he leaves it up to the community to refill it.

“It’s been really popular, there are quite a few people who come by every day. It kind of has a life of its own, I try not to interfere with it too much,” said Anbeek.

When he was a kid, Anbeek had his own record player and his father had a large collection of records. He got back into vinyl about a year and a half ago when a friend of his gifted an old console stereo that had a record player.

“Last January we had no records and now we have quite a few,” said Anbeek. “I really like 60s and 70s rock, but I also like a wide variety of new stuff as well, like The Barenaked Ladies, 21 Pilots and Imagine Dragons. All of these bands are releasing on vinyl again.”

At any given time, the box may have up to 40 records in it from just about every genre. Anbeek said he is especially pleased when he sees local musicians putting their own albums in it for others to discover.

Most of the feedback Anbeek receives comes from the box’s Facebook page, but he also sometimes mingles with people who come to the box.

Anbeek is often alerted to visitors to the box through barks from his dog Henry, who is also the box’s mascot.

“He sits by the window and watches,” said Anbeek.