Three paramedics have had to self-isolate after unknowingly coming into contact with patients that might have been exposed to COVID-19
0
Mar 25, 2020 9:00 AM By: Tony Saxon 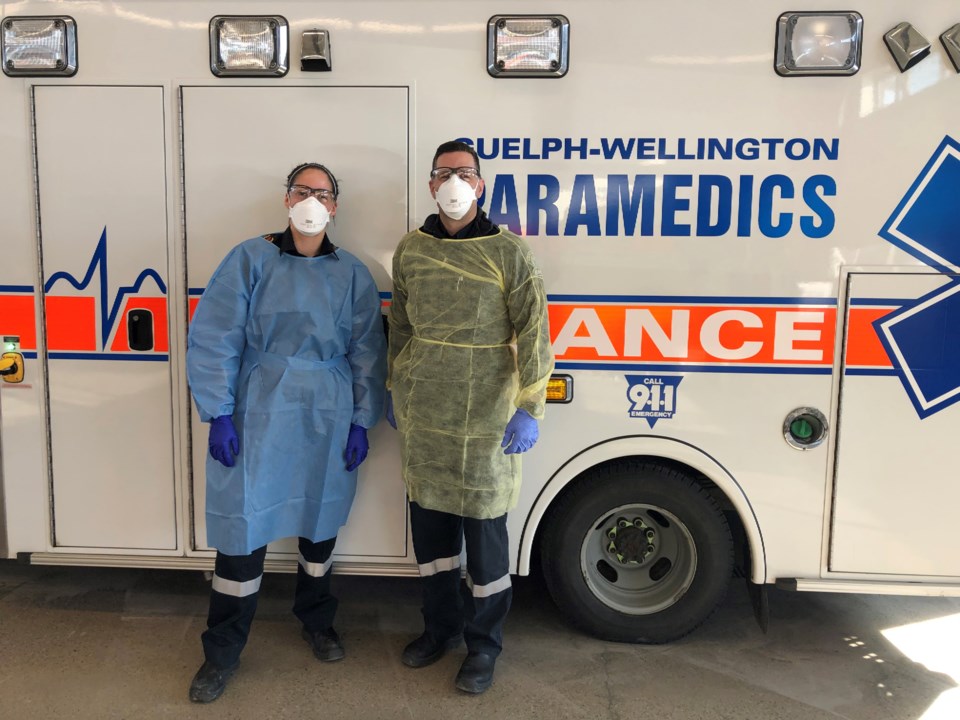 While call volumes may be down, the pressures and demands of the job are rising for Guelph paramedics.

The Guelph-Wellington Paramedic Service has seen a decrease of roughly 15 per cent in total calls since the CODIV-19 crisis hit, but the pressure and stress of the job have increased significantly.

“I think there’s a significant addition to the normal stress right now,” said Rebecca Leis, a field supervisor with GWPS and the person in charge of its in-house response to COVID-19.

“The concerns around the lack of personal protective equipment … that’s really starting to concern people because they’re worried about bringing it home to their family,” Leis said.

“We’re trying to help each other out, but we’re limited with supplies and with staffing, so I think it does eventually lead to a bit of burnout, quicker.”

Added deputy chief Leanne Swantko: “We have no idea where this is going to go … we’re just tying to be ready for it.”

So far three paramedics have had to self-isolate after finding out too late that the patient they were dealing with either had COVID-19 symptoms or had a possible  COVID-19-related travel history.

“We’ve had staff that have had contact with a patient that they didn’t realize was a potential COVID patient,” said GWPS chief Stephen Dewar.

Dewar wondered if part of the problem was people worried they weren’t going to get the treatment they need if they reveal they are at risk.

“It puts paramedics in a position where if they hadn’t taken all the precautions that they may have to be isolated after the call until they know it wasn’t transmitted to them,” Dewar said.

Paramedics have been given masks, goggles and a protective gown to wear at calls that may be COVID-19 related. But sometimes they just don’t know.

As for the reduction in calls, Dewar said it could be people more hesitant to call an ambulance because they don’t want to go to a hospital where they feel they may get exposed or people may be being conscious of not tying up needed resources in a time of emergency.

GWPS has 170 paramedics – 95 full time and 85 part time – plus an administrative staff of seven.

Dewar said the biggest challenge has been finding suppliers for personal protective equipment.

“Enough for the current time, but we’re worried like every service is, like every city is, that we have enough to reach to the end of this pandemic.”

“Paramedics are aware of that and they’re trying to limit the use of them to when it’s necessary, but that can be difficult to tell.”

Recent retirees have offered to step in if needed.

“We’ve already had some retired staff step up and say ‘if you need me, I’m here.’ We’re currently maintaining staffing levels, but we’re definitely concerned that as this progresses we are going to see that change,” Swantko said.

Leis said many paramedics have short-term arrangements in place, but having something long term will help.

“If school closures continued it was going to be difficult. It’s hard to work nights then be up all day with kids after,” Leis said.

GWPS has a service provider for health-related issues, but it also has its own peer-to-peer service that allows paramedics to talk to a trained co-worker who has been nominated for the role by others in the service.

“One of the things that’s great about our service is that we have this peer support team,” Dwar said. “They know it’s someone they can trust.”

The in-house service allows paramedics to call that peer 24/7.

“There’s always somebody on call so that they can actually call each other. It’s a very supportive group that allows employees to help each other through some difficult times,” Dewar said.

Leis said there is definitely some tension in the service as things progress, but education helps reduce that tension.

“I think after they’re educated and know they have the supplies they need, they’re all very capable of doing their jobs properly and everybody has stopped up to help each other out right now.”