With uncertainty of their jobs during the pandemic, many restaurant staff are leaving the industry
Jul 21, 2021 7:00 AM By: Anam Khan 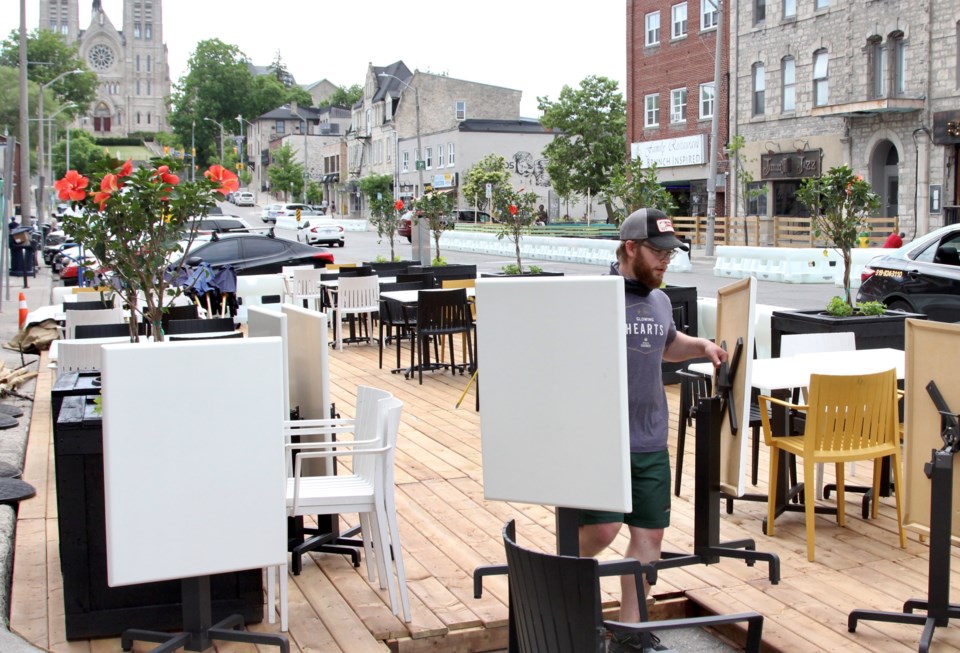 Dawson, a worker at La Reina sets up the patio in June. Anam Khan/GuelphToday file photo

While you may have been struggling booking dining reservations recently, many restaurants in Guelph are scrambling to find staff to serve you.

With lifted restrictions for patios and indoor dining, restaurants have been getting a lot of work. But there’s one problem: their staff left them a long time ago.

“I feel as though everybody that was involved with restaurants and hospitality pre-pandemic has basically had enough,” said Alex Tami, owner of Sugo on Surrey.

“The whole back and forth and the industry is not really all that reliable anymore so they've moved on to other industries.”

Tami said since the pandemic began, he permanently lost 80 per cent of his staff to industries such as real estate, medicine and factory work.

“I'm having to hire more people that don't have industry experience or a very fresh younger crowd, someone that I'm going to have to spend money on to give them extensive training so that we can reopen,” said Tami.

He said despite renovating the second floor of his restaurant to add additional seating, Sugo is only operating its patio due to limited staff.

“It's definitely hurting us a little more,” said Tami, adding that previous employees have graciously been coming back to work a day or two of the week to help the restaurant back on its feet.

James Rilett of Restaurants Canada — a not-for-profit association which represents Canada's food service industry — said it is hearing of staff shortage in cities and rural areas of every province.

“The biggest thing is a lot of people took jobs that had some certainty. So restaurants are now trying to find people to either replace them or convince people that had left the industry to come back,” said Rilett, adding that people fear for security and don’t want to be in the same position if there is another shutdown.

He also points out that at the height of the pandemic, approximately 200,000 people were out of work in Ontario’s restaurant industry.

“Even if a small percentage of those left the industry,  that's a lot of people that we have to replace so I think people forget how many people our industry employs and it's hard to replace those people at the drop of a hat,” said Rilett.

Downtown Guelph Business Association’s executive director Marty Williams said he has heard of many places in the downtown core operating under the allowed capacity because of short staff.

But restaurant staff aren't just leaving their jobs for other industries. Some are taking the pandemic as an opportunity to start the next chapter of their lives.

Shakespeare Arms general manager Melissa McQueen said roughly 75 per cent of her employees were university-aged students who hadn’t begun their careers and were working at the pub full time before the pandemic hit.

“When COVID happened, they kind of said this is the best time to start our career. So a lot of them took career jobs and then a lot of them just collected government-funded money because they would make more collecting the CERB, than they would if they continued to work here,” she said.

She said the problem with employees leaving in droves is that the restaurant ends up hiring people with little to no experience and this raises their labour costs.

“Most of our employees we had here were long-standing employees. And you know it's like starting from fresh again,” said McQueen.

“The kitchen is struggling finding line cooks and then when we do find them, it's a lot of extra training which is costing a lot more money in labour costs.”

She said when the lockdown finally lifted for patios this summer on a Friday, staff could barely keep up.

“People had no idea what they were doing and I know a couple of restaurants that stayed closed Friday, didn't even open because it's too much,” said McQueen, adding that many staff members worked 13 consecutive hours that night.

Not all restaurants have struggled with staffing in the same way. The Neighbourhood Group of Companies’ CEO Court Desautels said it was able to retain the majority of its staff and was short one or two employees in its four locations across Guelph.

He said early during the pandemic, the company noticed that many restaurants were trying to poach workers in a time when they were looking for means to just put food on the table.

“That's what started happening with us, and we just looked at that and said okay, ‘What are the key pieces that we need to be aware of and people are usually moving toward? Money is a big factor. After the pandemic, we raised almost $60,000 for our staff, we had health benefits, and all these other things and so we've we haven't actually gone after any other employees but we've had other people from other restaurants apply, because they know that they are supported,”

Richard Overland, co-owner of NV Kitchen + Bar said in the last few weeks, the restaurant went from a staff of 12 to 30.

“Hiring 18 employees is always a challenge in such a short period of time,” said Overland, adding that his employees worked 80 hour shifts during the first week of patios reopening to cater to the summer rush. Overland said his restaurant has been fortunate because it's a place that attracts employees with work benefits.

Desautels said as construction season slows down and people get laid off, he expects many people to return to the restaurant industry especially if indoor dining is open throughout the fall.