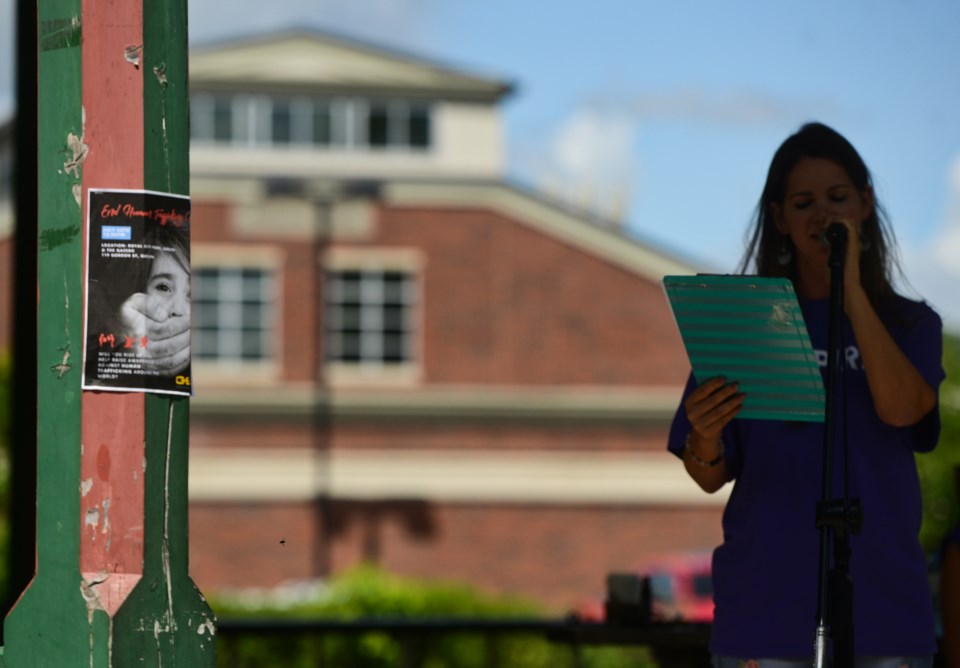 Human trafficking is not a problem happening only outside our city, it's one that's also happening here.

That was one of the messages delivered at a local World Day Against Trafficking in Persons event Thursday afternoon at Royal City Park.

"Does it occur in Guelph and Wellington County? The answer to that question is yes," said Katie Montague, the anti-human trafficking counsellor for Guelph-Wellington Women In Crisis.

"Ontario is a hub for human trafficking in Canada. Over 69 per cent of the reported cases occur in Ontario," she said.

"Most cases are found around Toronto and the greater Toronto area. Individuals are moved along the 401 to access major cities. As Guelph and Wellington County is along the 401, we have individuals who have expreienced human trafficking."

Force, fraud, coersion and control by a third party are the elements of human trafficking, Montague said, adding it can take a variety of forms.

She wanted to "bust" two myths about human trafficking: that it only exists across borders and that children are at the greatest risk.

"Over 90 per cent of trafficking within Canada happens with people who are Canadian," Montague said. "The idea that it happens somewhere else, somewhere less developed, somewhere less educated is simply not true. Canadians are capable and responsible for exploiting human beings and children too."

She added that the most vulnerable group is between 18 and 24, she said.

What's more important is to "walk beside" victims.

"The saviour complex is the belief that when you are helping you are saving the individual from their circumstance. It disempowers the individual and takes away their choice and freedom," Montague said, thus re-victimize them.

It's important you support them as they lead their own journey, Montague said, pointing out she was talking about adult victims, not children.

Krause said Elora House is there to love and support those who come to stay there, not control them and tell them what they have to do.

"We are there to support their decisions, walk with them, and the biggest thing is to show them unconditional love," Krause said. "They have been stripped of everything ... so we are helping them get their identity back ... helping them find who they are again."

The event in Royal City Park was organized by the a trio of local concerned citizens – Clare Esler, Eleni Stoumbos and Dawna Toews – with sponsorship from  Canadian not-for-profit Free-Them, an organization dedicated to raising awareness and funds to abolish human trafficking.

Toews said COVID-19 hasn't put an end to the problem of human trafficking.

"They continue to harm people, finding ways to innovate and capitalize on the chaos, so we will press on even more," she said.

Toews said the "best way to be vigilant and protect your family and friends is by learning the signs and indicators of trafficking and by candidly talking about the risks with your child."

What can people do to help? Toews said learn about trafficking and share that information. Speak out and become an advocate. Start a dialogue with your family, neighbours and co-workers. Challenge it on a local, provincial and federal level. Find out what your representatives are doing about it.

Most importantly, stop it: if you suspect it is happening in your community or to someone you know, call police or Crime Stoppers. or a sexual assault line.