Estill sees his new parcel delivery business model as a way to help save the environment
Jul 18, 2019 10:55 AM By: Anam Khan 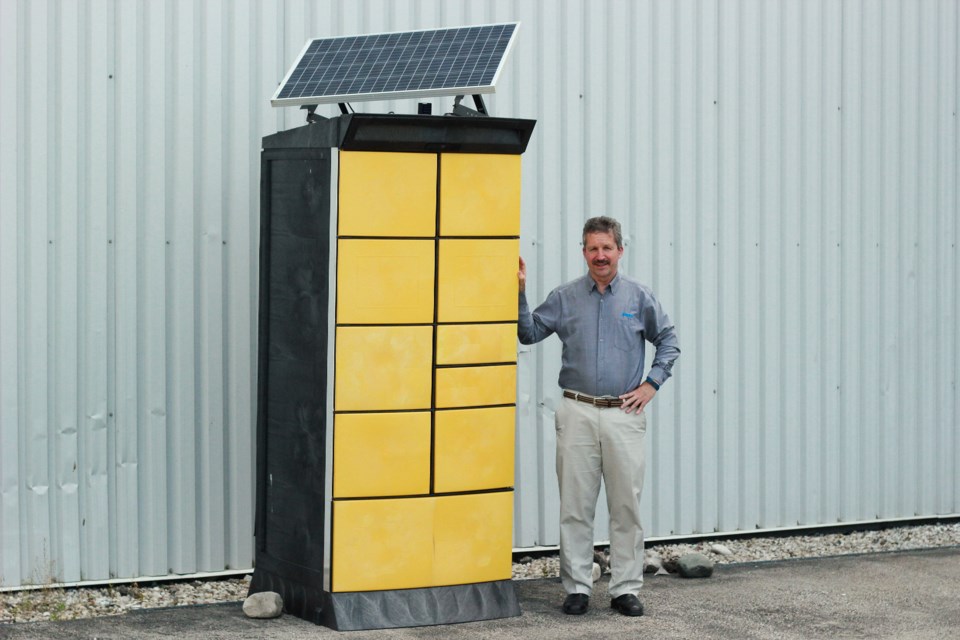 CEO of ShipperBee Jim Estill stands beside a hive that holds parcels ready to be picked up to deliver. Anam Khan/GuelphToday

Is it possible to save the environment and get paid for it? Jim Estill thinks so.

A crowdsourced parcel delivery system called ShipperBee looks to make use of the space in vehicles already heading somewhere to deliver parcels.

ShipperBee began as a pilot in Guelph, Kitchener, Cambridge and Waterloo last week with designated drivers delivering parcels and getting paid for it through the company website. Drivers can also sign up through the web site.

“This is Uber to taxi. This is Airbnb to hotels. That's exactly what it is,” says Estill, CEO of ShipperBee and Danby Appliances who is also well known for his work in sponsoring Syrian refugees.

The name ShipperBee comes from a bee’s nature of contributing to the environment by pollinating and playing a crucial role in the eco-system.

Estill says the name naturally reflects his vision of focusing this company primarily on the environment by reducing carbon emission on the roads and essentially doing the right thing for the Earth.

The way ShipperBee works is simple: You place an order, locate a pickup driver, they deliver it to a mini station called a hive which takes a photo of the parcel, it transfers across networks where another driver picks it up to deliver to the final destination while eliminating the added greenhouse gasses into the environment because the driver is already driving there.

People willing to deliver parcels sign up on the app as a driver currently only available to drivers.

“One of my goals is to change the way courier systems are done because it is 77 per cent in greenhouse gas savings and our biggest challenge is the climate,” Estill said.

“I’m a very big environmental person and we can save 77 per cent of the greenhouse gases per parcel which is a meaningful number.”

Estill says the numbers were calculated carefully and derived from the assumption that a car idles for two minutes when its stops at the hive and the driver is a kilometre out of the way, taking in account detailed map routes for parcels for regular shipping.

But still, how does it save a number as high as 77 per cent?

The main greenhouse gas saving is the ‘power of while.'

Estill says the calculation of greenhouse gas savings doesn't even include the cost of a distribution centre which would cost a high percentage of greenhouse gas to run and for everyone to commute to the building.

“So we didn't include any of that and we still end up with 77 per cent reduction, which is highly meaningful,” says Estill.

Estill says he had the idea for this company in January 2018 when he was waiting in traffic and realized all the empty unutilized space in vehicles on the road while in transit.

“This parcel industry is growing at a great rate and then you see unutilized resources when I’m driving to Mississauga and I’m behind a FedEx truck saying ‘what is he doing on my road when all the cars are sitting with nothing in it,’” says Estill.

So with ShipperBee, there are hives located at gas stations, a convenient stop that is on the way for any driver. And there are two types of drivers.

The first is the commuter driver or the power of while driver that Estill likes to call a ‘side hustle without the work.’

The wage is a little more than $60 an hour for the time out of the driver’s way.

The second kind of driver is an endpoint driver that actually picks up the parcels from the hives and delivers them to homes.

“For the endpoint driver, you log in and say ‘I have two hours free, ‘I would like to work for two hours and you get paid roughly $25 per hour,’” says Estill because you're not going out of your way.

“They will drop right to the business or the home so the key is there is no change in consumer behaviour. It’s the same experience you get when you order from Amazon.”

Once it is delivered, the shipper, consumer and driver can all rate each other based on their experience.

Estill says when people see the hive they think it is similar to the amazon locker where you would have to pick it up.

“You don't have to pick it up. It comes straight to your doorstep and a picture is emailed to you saying here is the box on your front door dropped at 10:20 today,” says Estill.

“If you want, you can send your kids off to school in the morning and then go off to drive for a few hours, and you can pick up your groceries while you're out. It's a parcel. It can sit,” says Estill.

In a recent market survey for the company, Estill found that 83 per cent of people who commute more than half an hour would carry parcels.

“The key is we've minimised the time the commuter driver has to spend. You want to be so fast, you just drive yourself to the hive, pick your parcels up and drop them to the next hive. You don't have to do any sorting,” says Estill.

“The key as a commuter driver is you don't want to spend extra time,” says Estill.

He points out that the nature of shipping is that you cannot-not go to an area which is why it is important to expand this business within Canada and the United States.

“Soon we're going to roll out onto Oshawa, to London, to St. Catherines, and to the Barrie area.”

“We would essentially be a competitor to FedEx, UPS and Canada Post,” says Estill who has plans to eventually go global.

Estill says by having a large emphasis on helping the environment, it helps remove any stigma associated with working on the side by primarily providing a  solution for the environment that also brings extra cash.

He says he hopes ShipperBee will be his environmental legacy.

“If I can change the way the hub and spoke works, it will be very good for the world and it will be good for traffic,” says Estill.