Let the games begin: candidates can now register to run in 2018 municipal election

First-time candidate Indu Arora follows Mayor Cam Guthrie as the first people to register to run in October
0
May 1, 2018 7:00 PM By: Tony Saxon 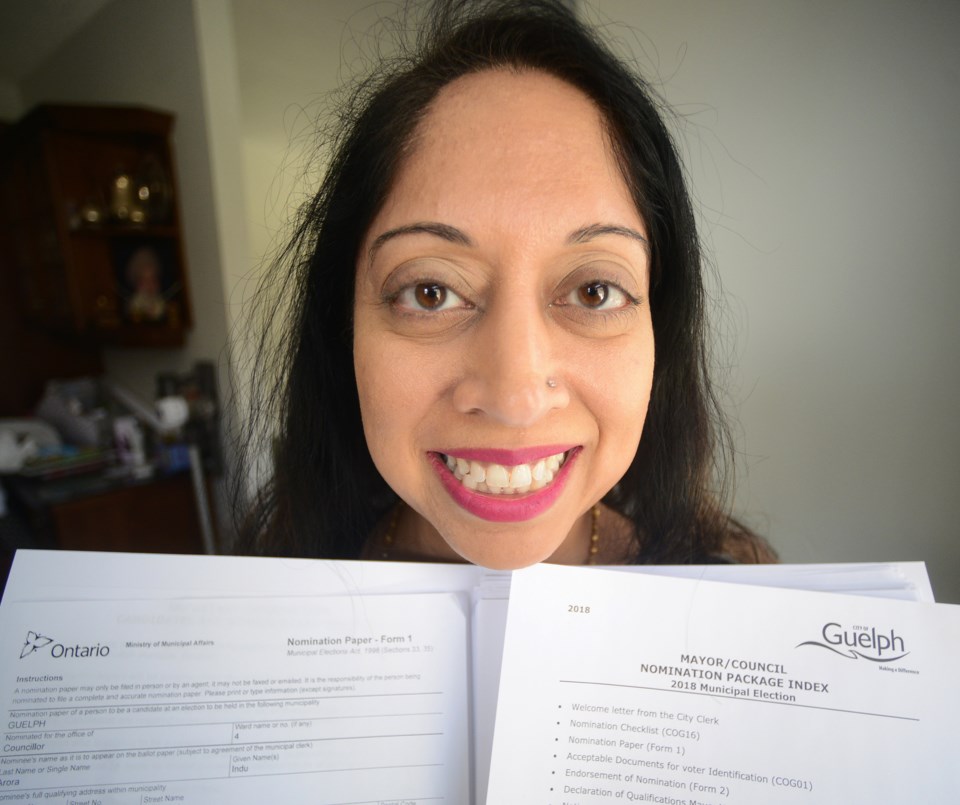 Indu Arora holds her nomination papers after being one of the first to register to run in the 2018 municipal election when nominations opened Tuesday. Tony Saxon/Guelph

Indu Arora was at Guelph City Hall bright and early Tuesday morning to register to run for council in the October municipal election.

Tuesday was the first day people could plunk down their $100 ($200 if you’re running for mayor), go over the rules and regulations with city clerk Stephen O’Brien, then sign their name to run for council or as trustee for one of the city's two school boards.

Arora was second in line, beaten by mayor Cam Guthrie, who is running for reelection, by 30 minutes.

“I’ve already been giving back to the Guelph community for many years, so committing to represent Ward 4 is a natural extension of wanting to help people and build a wonderful city to live in,” said Arora, a freelance editor and homemaker who lives in the west end with her husband and two children.

Unbeknown to Arora, she also held the unique honour of being the first visible minority to run for Guelph City Council in 15 years.

But Arora, a University of Guelph grad who has lived in the west end for over 30 years, downplays the colour of her skin when it comes to running for council.

“My culture or heritage is not what I want to have define me during this election,  just as I don’t want people to base their vote because of my gender,” she said.

“I want them to see and hear about my passion for this community and to consider me for my ideas and work ethic that I’ll bring to city hall. It’s about who the best person is for the job, and I think I’m that person.”

A 2010 pre-election article in the Guelph Mercury detailed that there had never been a visible minority member of city council and that the last visible minority to run was Mirza Baig, who ran in Ward 6 in 2003.

There hasn’t been a visible minority candidate in the past two elections.

Women are also the minority on council, holding four of the 13 seats at the horseshoe.

The first three people to register to run as councillors on Tuesday were women: Arora along with Charlene Downey in Ward 1, Dominique O'Rourke and Stacy Cooper, both in Ward 6.

Arora attended a Women in Politics workshop run by city councillor June Hofland earlier this year and said it helped solidify her decision to run and helped with knowledge of the more hands-on elements of running.

“Learning about some of the practical ins and outs of running a campaign and learning what it’s like to be on council in the workshops were good,” she said, “but I had already made up my mind that I wanted to run before I attended the workshops.”

Eight people had made appointments Tuesday to fill out nomination papers.

The last day to register is July 27.