Guelph youth who came to senior's rescue recognized by city

Darcy Wadden, Ivy Bezusko, Hunter Chaisson and Nathan Paddock said they were at the right place at the right time
Feb 14, 2020 1:50 PM By: Anam Khan 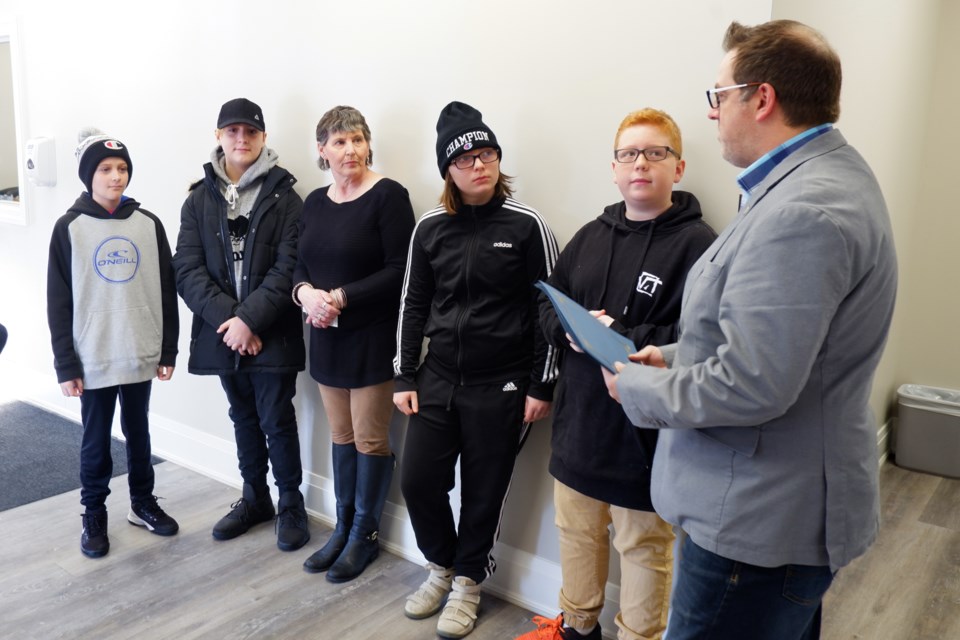 Last September four Guelph elementary school students were hanging out after school in the city's north end when they heard a loud bang.

Looking over they noticed a senior, Nancy Saunders, on the ground bleeding after she fell face-first trying to push her garbage can to the curb.

The story of how Hunter Chiasson, Darcy Wadden, Ivy Bezusko and Nathan Paddock helped the woman and what happened after that went viral and touched the hearts of many in the community.

“Me and Nathan were knocking on all the neighbours' doors so we can get someone to come out,” said Chaisson. “I thought she was going to bleed out or something like that. It was pretty bad.”

It was then that Wadden made his first 911 call.

“I was telling them she's bleeding a lot, I think we need an ambulance quickly,” said Wadden.

“It probably felt longer than it actually was,” said Wadden about the approximate 25 minutes it took for the ambulance to arrive.

“It made all of us cry,” said Besusko about the husband who was reluctant to use his puffer because he was so focused on being there for his wife. He had also fallen earlier in the day trying to push the garbage bin to the curb.

On Friday morning, Mayor Cam Guthrie awarded four Grade 7 students a certificate in recognition of their outstanding act of kindness.

“Too often, the really good things that youth do in our city, they're just happening all the time but not getting recognized from some of the leaders in the city,” said Guthrie.

“I just want to motivate these kids to continue to do the good work they've shown in the past year.”

The children said the incident affected them to such an extent that they visit the couple every week to place the garbage bins outside for the senior couple because they never want the couple to get hurt again.

“They kind of said you guys don't have to come back anymore,” said Chaisson.

“If it happened again, and there was no one there to help her, she could possibly die,” said Chaisson.

Wadden said the scars from the fall are still on the woman’s face.

“Mother Teresa said to do little things with lots of love,” said Mondal about his gesture to give the tickets to the avid basketball fans.

Guthrie said its important to recognize actions such as these officially.

“It's not just about that moment, it's about the moment after that need to be celebrated and recognized for these kids,” said Guthrie.

“They're going above and beyond from the moment she needed help, and now they're giving back to the community to help this lady. It's an amazing thing.”