The Quebec Major Junior Hockey League's Rouyn-Noranda Huskies will face the Ontario Hockey League's London Knights in Sunday's championship game at the 2016 MasterCard Memorial Cup
May 28, 2016 12:48 AM By: Brad Coccimiglio 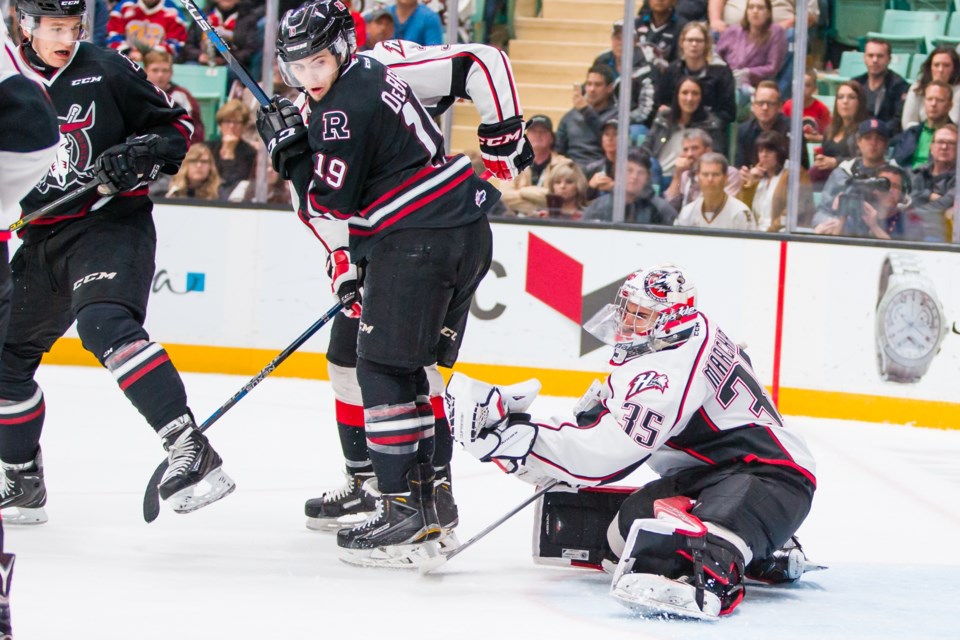 RED DEER, AB – A hot goaltender can be huge in a short tournament and the Quebec Major Junior Hockey League champions found out what that can get you.

A 36-save performance by Chase Marchand led the Rouyn-Noranda Huskies to a 3-1 win over the Red Deer Rebels of the Western Hockey League to earn a berth in Sunday’s championship game at the 2016 MasterCard Memorial Cup.

“He challenged the puck carriers, he was calm and he competed,” said Huskies General Manager/Coach Gilles Bouchard of the overage netminder. “He never gave up.”

The Huskies opened up a 2-0 lead in the opening period when Francis Perron and Martins Dzierkals scored 1:07 apart midway through the period. Nikolas Brouillard would give the Huskies a 3-0 lead just over five minutes into the second period.

“We made a couple of mistakes in the first period that put us behind,” said Red Deer General Manager/Coach Brent Sutter. “We kept battling and we had some great opportunities and some great scoring chances. Their goalie was the best player on the ice tonight.”

Red Deer’s Luke Philp would cut the lead to 3-1 with a power play goal in the second period but that’s as close as the Rebels would come as Marchand shut the door the rest of the way, stopping 25 shots over the final 40 minutes of the game.

“It’s a short tournament and anytime you can run into a hot goalie,” said Rebels defenceman Haydn Fleury. “Hats off to him. He played unbelievable tonight. Some of the saves he made there in the third period probably gave their team a little bit of confidence.”

“We played a faster game and a more physical game,” said Huskies forward AJ Greer. “Guys were more disciplined, including myself. Guys just stuck to the game plan. We collectively came together as a group and got the win.”

The Huskies held off a late-game push after the Rebels pulled goaltender Rylan Toth with just over three minutes left in the contest for an extra attacker.

“We did a great job,” Greer said of the final minutes. “Guys were sacrificing their bodies and they were ready to compete.”

“Them scoring one goal, even if it’s 3-1, it gives them momentum and we didn’t want that to happen,” Greer added.

Toth made 24 saves for Red Deer.

For the Rebels, the loss ends the season for the tournament host. The Rebels advanced to the semifinal after going 2-1 in the round robin and defeating the Brandon Wheat Kings in Wednesday night’s round robin finale to end the WHL champion’s season.

The Huskies, who finished the round robin with a 1-2 record, now enjoy a day off before facing the Ontario Hockey League’s London Knights in Sunday’s final.

Greer said that the Huskies believe that at even strength they have a chance against the OHL champions.

“They’re a very skilled team but I strongly believe we can beat them five-on-five,” Greer said. “And that’s across our locker room, we know what we can do.”

“They have a good power play and a good penalty kill so we’ve got to stay disciplined,” Greer added.