Mike and Mike's $2.5 million funding announcement at U of G 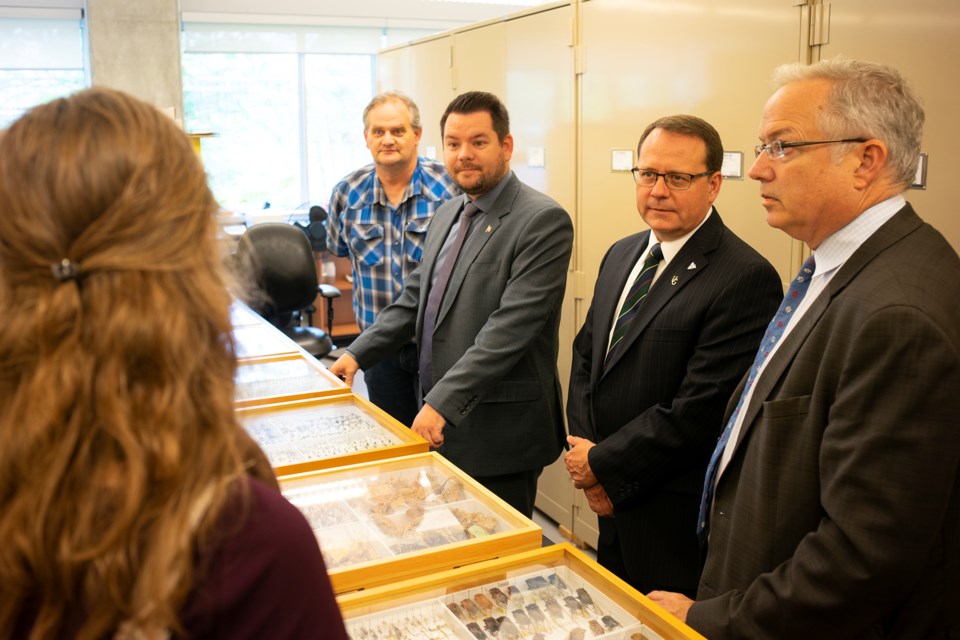 MPP Mike Harris (centre) and Mike Schreiner, leader of the Green Party of Ontario, seen during a tour of the Biodiversity Institute of Ontario at U of G on Tuesday. Kenneth Armstrong/GuelphToday

On hand for a provincial funding announcement at University of Guelph on Tuesday, Guelph MPP Mike Schreiner says he is happy to stand next to his Progressive Conservative colleagues when it involves good news for Guelph.

On Tuesday, Kitchener—Conestoga MPP Mike Harris visited the Biodiversity Institute of Ontario at U of G to announce more than $2.5 million in funding for local research projects.

Schreiner acknowledged that MPPs from opposition parties are not always invited to funding announcements by the government of the day in their own riding, but said he has a good working relationship with Harris and was on hand for the ‘good news’ announcement.

“The Biodiversity Institute is a jewel here at the University of Guelph, it’s doing cutting-edge, world-renowned research that is critically important, given the loss of biodiversity we are seeing around the world,” said Schreiner. “The fact that the provincial government is providing some significant funding to support that research — I think that’s good for Guelph, good for Ontario, Canada and the world.”

Harris, who is the son of former Ontario premier Mike Harris, was making the announcement Tuesday on behalf of Ontario’s minister of Economic Development, Job Creation and Trade.

Of the more than $2.5 million in funding announced on Tuesday, $166,666 will go toward research to analyze DNA sequencing done at the Biodiversity Institute of Ontario. Across the province, the government is investing $41million in 174 research projects.

The investments are being made possible by the province's Ontario Research Fund, .

Harris said the Ontario government wants to ensure that the people learning to cure diseases and inventing new technologies have the tools and support facilities to complete that work.

The lion’s share of Tuesday’s announced funding — $1.4 million worth — will go toward the Linked Infrastructure for Networked Cultural Scholarship (LINCS) project, a U of G-based network designed to convert large datasets for use in cultural research.

Other funding announced at U of G on Tuesday will go toward research projects focused on the environment, industry and medical sciences.

“Today’s provincial investment will help researchers — some at the beginning of their careers — innovate in there fields of study and strengthen our economy,” said Harris.

A tour of the facility showcased its extensive specimen collection and equipment used to sequence DNA to the MPPs.