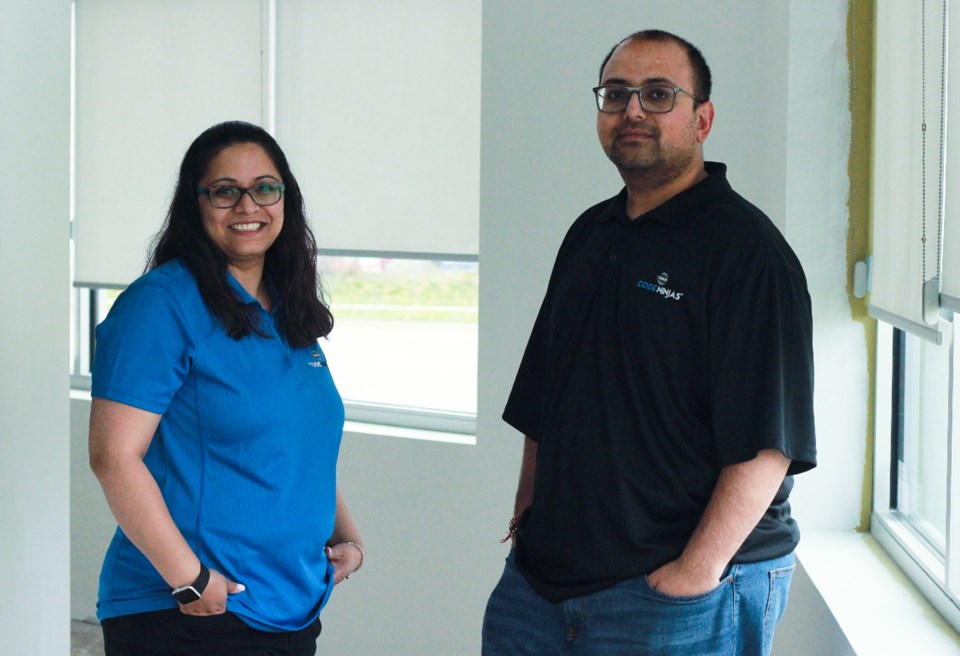 Code Ninjas will be opening its doors within the next few weeks in Guelph to teach local children how to computer coding while having fun.

The company was founded in the United States by professional software developer David Graham in 2016 who learned that there was an unfulfilled demand to prepare children with coding skills for the future.

With hundreds of locations across North America and the United Kingdom, Code Ninjas has taken off by a storm.

The Guelph location at 104- 79 Claire Rd. E.  is owned and operated by local entrepreneurs, University of Guelph alumni and married couple Jay and Pamela Pandit.

“We wanted to get our children involved in something like this, but saw the lack of options in Guelph,” said Jay who wanted to get his children into coding to prepare them for future trades.

Code Ninjas’ core program consists of nine belts, just like martial arts. The curriculum is self-paced and taught with the help of instructors who call themselves code senseis. During their learning sessions, children work together with their classmates as they progress from white to black belt.

The program aims to keep kids motivated with “belt-up” celebrations, where they receive colour-coded wristbands to mark their graduation to the next level. By the time a student finishes the program, they have the opportunity to publish a real app in an app store.

“Their focus is on kids having fun. So even when they’re learning to code, they’re building a video game and they get to choose the characters they want to design for the game,” said Jay.

“It’s not like they go to school and then they come here and there is someone in the front of the room talking to them again.”

With programs for children from seven to 14 and starting as early as five for the junior program, the organization tries to use the latest technology to engage children of all ages with oculus rift headsets and robots they are able to program themselves.

“It’s very much like kids having a lot of fun getting to play with things and still learning at such a young age,” said Jay.

To inaugurate the new centre, Code Ninjas Guelph will host a grand opening event on Nov. 24. Complimentary game building sessions, STEM learning activities and refreshments will be offered for everyone to get familiar with the Code Ninjas curriculum.