Now the real work begins on the Smart Cities Challenge

After the City of Guelph and Wellington County won the Smart Cities Challenge in 2019, the team has been busy in laying the foundation of the work to come
Jan 13, 2020 7:00 AM By: Anam Khan 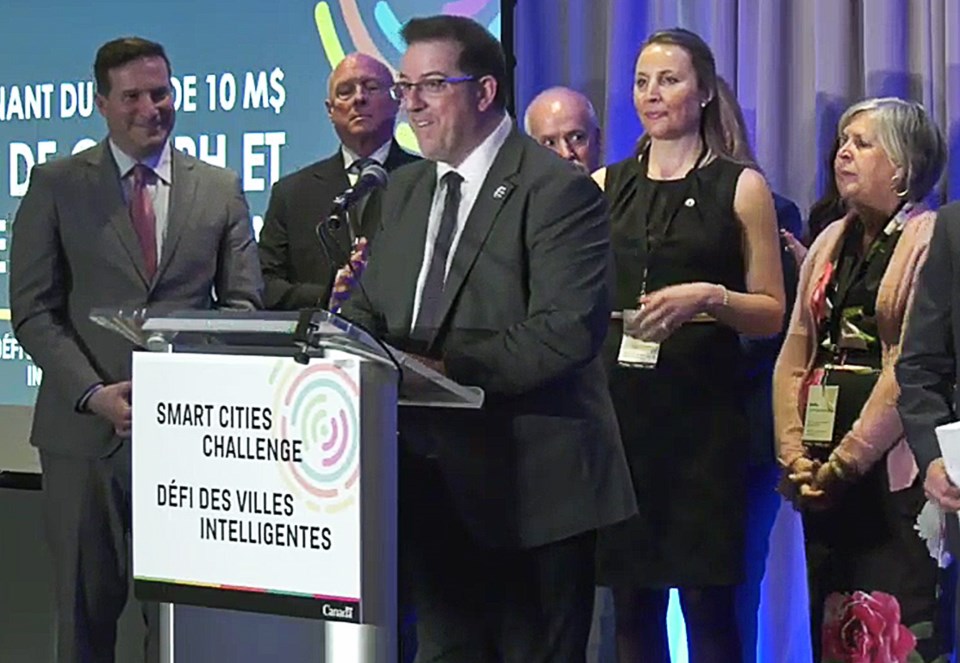 Mayor Cam Guthrie accepts the award after the Guelph-Wellington entry in the Smart Cities Challenge won the $10 million prize in Ottawa. File photo

After the City of Guelph and Wellington County won the Smart Cities Challenge last summer, preparations to launch the project began in the fall. With over 150 people and over 30 organizations involved in this project, the real work begins this month.

“There was a lot of work getting organized and working with the federal government to prepare contracts,” says Barbara Swartzentruber, the executive director of the Smart Cities office.

“We’re so excited for what this year is going to bring and we’ve already seen so many benefits from the project.”

Right after the city won the challenge, it opened a Smart Cities office and began to work with the federal government to establish contracts with community agencies.

Swartzentruber says the Smart Cities team visited 23 conferences locally and internationally where they presented to over 3,700 people. They also actively engaged in podcasts and radio broadcasts to share their unified vision.

“It’s really important in this project to talk about the vision and the work we’re doing and to continue to gather partners and collaborators both locally, nationally and internationally,”  Swartzentruber.

“The knowledge sharing has been a big part of our work.”

Swartzentruber says the work completed this year will pave the way for subsequent years.

The city says it will be working on a number of projects this year including a nutritious food project that will assess neighbourhoods to determine which areas do or do not have access to healthy food so they can intervene and make changes accordingly.

“We want to increase access by 50 per cent,” says Swartzentruber.

The challenge also plans to launch its circular innovation hub which aims to bring businesses and researches together to tackle food system challenges.

Swartzentruber says the team will be working with businesses in the community so they can provide them with tools to help them reduce waste and greenhouse gases.

It also plans on launching a harvest impact fund that will present awards to businesses, help them receive funding and encourage them to collaborate.

Demonstration projects include the city’s partner SEED which will be launching their Upcycle Kitchen to save wasted food.

“Collaboration in the community has been incredible and one such example is the expansion of the community food markets at the YMCA. Through this, the YMCA and the SEED have been connected and now they use the YMCA as a community market on Mondays,” says Cathy Kennedy, the city's manager of policy and intergovernmental relations.

Swartzentruber says Recycling Ontario expressed their interest in working with the city to analyze the waste systems that serve the commercial and institutional sectors to find ways to rescue food and also find ways to turn organics into compost and then regenerate them for other purposes.

The team will also create a public awareness campaign focused on food waste so it can come up with actions people, institutions and businesses can take to do their part in the community.

The team is also working on a data utility project that allows all community partners to share data.

“Entrepreneurs can use that data to create new economic benefits,” says Swartzentruber.

Swartzentruber says Wellington County will be working on improving broadband access to rural communities and farms.

“A really important part of this initiative we don’t talk about enough is rural and urban partnership and how we can look at the food flow and waste flow systems between the city and the county and find ways to improve access to local food and turn what you would consider being waste into different kind of business and value-added products,”  Swartzentruber.

She says while the year 2020 is focusing on creating the foundation for the vision, the next years will work on making incremental progress towards the three goals of the Smart Cities Challenge.

“Next year you’ll see the beginning of interventions and the start of creating a road map that identifies the progress we’ve made and a road map that we can share with other communities on how to do this work,” says Swartzentruber

Swartzentruber says the entire community of Guelph has really galvanized around the vision of creating a circular food economy doing what needs to be done to make sure people have access to nutritious food, create new jobs and businesses that will help them solve food system challenges.

She says the team noticed that the more community partners collaborate in this challenge, the more opportunities present themselves.

“What this has done is really inspire people to come forward with great ideas that we can then find a home for and support,” says Swartzentruber.

“People come up with ideas and we can really connect them with the right people to realize those possibilities and make them happen.”

Guelph stays at orange level
Nov 27, 2020 1:21 PM
Comments
We welcome your feedback and encourage you to share your thoughts. We ask that you be respectful of others and their points of view, refrain from personal attacks and stay on topic. To learn about our commenting policies and how we moderate, please read our Community Guidelines.