Bishop Mac was one of a number of local schools participating in the Student Vote mock election
0
Jun 6, 2018 5:00 PM By: Kenneth Armstrong 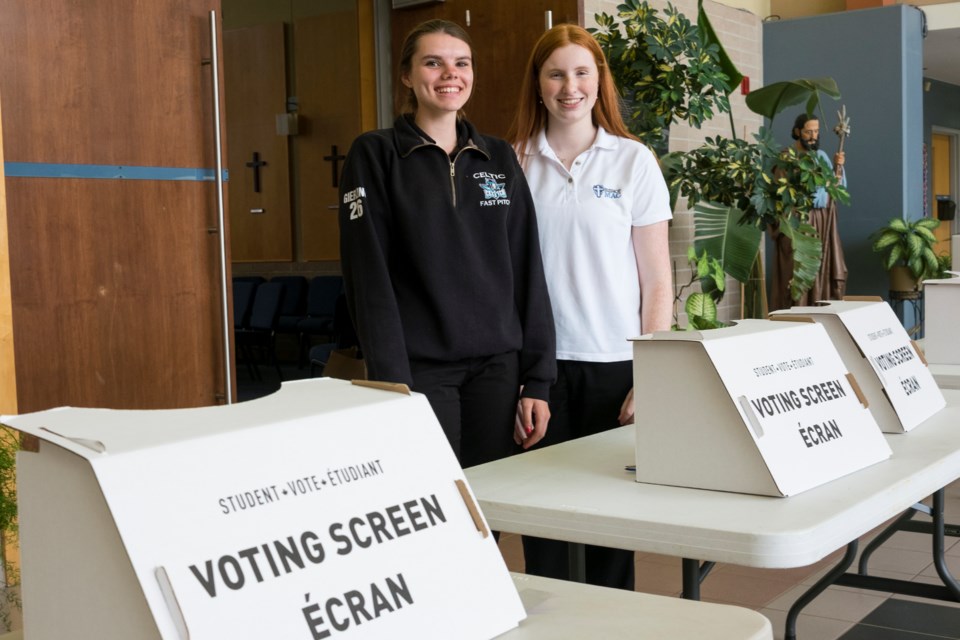 L-R Sarah Gierling and Isabella Cain are among the Bishop Mac students organizing Student Votes, a mock election that is taking place in schools across Ontario on Wednesday. Kenneth Armstrong/GuelphToday

Allowing students to vote in a mock election not only informs the student body, but also the adults in the building, says a Civics teacher at Bishop Macdonell Catholic High School.

High school students across Ontario are participating in the Student Vote mock election Wednesday, one day ahead of Thursday’s actual provincial election.

The key point of the mock election, which is organized by CIVIX Canada, is to prepare the students to be future voters, said Cathy Doucette, Civics teacher at Bishop Mac.

“At the start they say ‘this doesn’t involve me, I’m too young to vote’. Then once they learn a little bit, they realize it does matter to them,” said Doucette.

Students are informed of who the candidates are, what party they are running for and the platforms of those parties.

About 45 Bishop Mac students then travelled to Our Lady of Lourdes Catholic High School late last month to watch the all-candidates debate there.

The ride back to Bishop Mac after the debate was interesting, said Sarah Gierling, a Grade 11 student and one of the organizers of Wednesday’s mock election.

“The bus ride back was full of a lot of different people sharing their opinions about the different candidates and the party platforms,” said Gierling.

Grade 10 student Isabella Cain also helped organize the Student Vote mock election and was among the Bishop Mac students at the Lourdes debate.

“A lot of the students went into the all-candidates meeting thinking they would vote one way, then once they got to know who the local representatives were ended up shifting what they were thinking based on the performances,” said Cain.

The mock debate that was set up on Wednesday at Bishop Mac looked in all respects like any other polling station that will be set up around Guelph on Thursday. In fact, Bishop Mac will also be hosting an official polling station on Election Day.

“Everything that would pertain to running an election is what we were doing,” said Cain.

Gierling noted one difference, that the mock election uses class attendance lists instead of a voter registry.

Cain said she thinks voter turnout is traditionally low with young people because they don’t know the voting process. Even if the results of Wednesday’s mock election don’t count, the students will know the process four years from now when the next provincial election is expected.

The results of the Student Vote will not be made public until Friday, after all of the ballots in the actual election are counted.

Doucette said the engagement by the student’s in this year’s election has benefited not only them, but also the adults in the building.

“Now the teachers are wondering what tomorrow is going to look like, who is going to win,” said Doucette.