An open letter signed by dozens of local individuals and organizations said the Safe Place program was created without any input or consultation by the very community it is intended to serve
Apr 7, 2021 4:00 PM By: Kenneth Armstrong 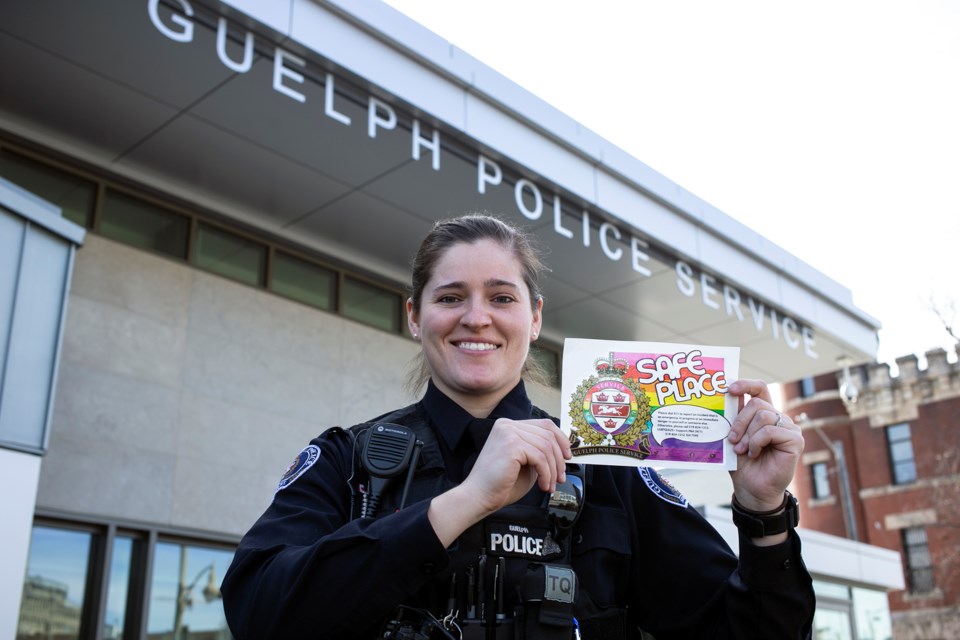 Const. Abigail Campbell holds up a Safe Place sticker, part of a program that seeks to offer a secure location for victims of hate-motivated crimes to safely report to police and get the shelter and assistance they need. The program has been put on hold after an outcry from the LGBTQ+ community, which said it was not consulted and that other programs already exist. Kenneth Armstrong/GuelphToday file photo

A program intended to support the LGBTQ+ community that was recently introduced by the Guelph Police Service has been paused after local groups signed an open letter calling for it to be cancelled.

The Safe Place program announced by Guelph Police Service (GPS) last month was intended to offer businesses and organizations to sign up and commit to be a place of safety for someone who is LGBTQ+ who is the victim of a hate crime. With its commitment, the business or organization receives a Safe Place sticker for the front door or window.

In an article about the program last month, Const. Abigail Campbell, the officer who initiated the program, acknowledged a strained relationship between the GPS and LGBTQ+ community.

In an open letter signed by dozens of local individuals and organizations, Guelph Pride’s parent organization Out on the Shelf (OOTS) said the Safe Place program was created without any input or consultation by the very community it is intended to serve and that existing programs built by local grassroots organizations are already in place.

“The GPS program provides a sticker without any qualifying training, without any input from our community, and without follow up to maintain the commitment to the community. It is a sticker and a commitment without meaning or teeth,” said the letter.

Guelph police reached out to Guelph Pride/OOTS once by email, said the letter, and did not disclose it was developing the Safe Place program.

“Guelph Pride/OOTS let the liaison know that Guelph Police Services would need to meet the demands required by Black Lives Matter (BLM) in order for the organizations to feel safe engaging with GPS,” said the letter.

In a statement, Guelph Police spokesperson Scott Tracey said the department will be having a meeting this week to discuss the state of the program moving forward.

“A number of businesses have been signed up, but at this time no additional businesses are being signed up as the program is reviewed," said Tracey.

Signers of the letter include: board of directors of Out on the Shelf, Guelph Pride committee, Guelph Queer Equality, among others.

The board of directors of HIV/AIDS Resources and Community Health (ARCH) signed the letter opposing the program, said its communications and fund development coordinator Sonia Preisler in a phone interview Thursday.

It is encouraging that so many Guelph businesses were interested in signing up for the Safe Place program before it was shut down, said Preisler, even though a locally-developed program already exists.

“It’s good to have this momentum of people interested in supporting their community, but I think ARCH does a really great program and it requires organizations and businesses to educate themselves,” said Preisler.

ARCH has created a LGBTQ+ cultural competency tool kit it calls Voices of Value, which was developed locally through collaboration and consultation with a number of groups and includes training by people with lived experience.

“We have been supporting our communities through multiple pandemics and really on the front lines,” said Preisler. “I think local organizations are best equipped to deal with and respond to the needs of the community and we have been doing that.”

Preisler said it would have been more helpful if GPS had conducted an environmental scan of what the community has done and what it is doing instead of imposing its own program on the community.

“It’s really important for these institutions, like the police service, to understand how that relationship works,” they said.

Preisler noted the Voices of Value program is free for businesses and organizations to access and can also be supported by donation.

GuelphToday also reached out to Out on the Shelf and Guelph Pride's chair for comment on this story but did not receive a response by press time.