Going far for a higher purpose

There has to be a higher purpose driving anyone who embarks on an epic trek by foot or bicycle, across the country or around the world — in excruciating pain, endangering life and limb, on the brink of exhaustion. 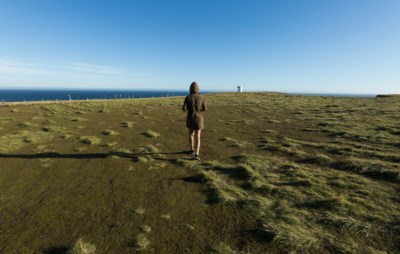 I pity the poor long-distance trekker — pity them from the boniest depths of my posterior to marrow of the bones on my sympathetically aching feet.

It’s not for health, certainly not for mental or emotional well-being, and not for the view. It is simply for the act of keeping going to reach an end, and a bittersweet end where some fleeting enlightenment may await. An inner drive, some gut desire, a subconscious need or prompting in the soul that defies logic or physical limitation, keeps one moving.

My few long distance, self-propelled journeys have all been under 1,000 kilometres, all on the cursed seat of a bicycle, all in middle age. And they were intensely challenging and painful. I cried and screamed, I puked and coughed and got the runs. But I had a destination in mind and I had to get there.

I know a guy who rode a bike from Cairo, Egypt to Johannesburg, South Africa, when he was 60. And he did it on a converted mountain bike.

I have a friend who walked from Saskatoon to Vancouver for Jesus when he was a teenager.

I once met, and was hugely impressed by a Hare Krishna swami from Toronto who walked across Canada to promote spirituality. He wore robes of a pinkish colour, and shaded himself with an umbrella. He may have been the happiest man I have ever met.

He attributed his walking success to a comfortable pair of running shoes, but I figure it had more to do with his ability to override pain, a capacity that not everyone possesses.

He ate only plain yogurt and what little nourishment he could forage in the ditches and woods — berries, edible plants and roots mostly. At times he treated himself to a ginger ale.

While living and working as a journalist in Sudbury for many years, I had the privilege of reporting on all the many long distance, epic travelers that walked, jogged or biked through the city, as they made their way down the TransCanada Highway to raise funds for research into a host of diseases, or to promote world peace, gay rights, environmental protection, or poverty elimination. A great many of them were inspired by Terry Fox.

One man was biking across the country to raise money for an orphanage in Africa, and literally had an orphan from Africa riding in a trailer behind him. That man seemed quite mad.

Another lad was cycling with a trailer that was far too big and wide for the narrow shoulders of northern Ontario roads. The trailer had been clipped by transport trucks and damaged twice. That kid was on the verge of a breakdown by the time he made it to a gas station in Lively. He took each of my questions as accusations. I would have told him to stop, but he might have killed me.

I’ve done three, week-long cycling trips in recent years. One was around the entirety of Manitoulin Island, a favourite spot on the planet. Another was throughout the region where I grew up in Saskatchewan, through the small towns where I had played league and tournament hockey and baseball. I did that 600K trip as research for a novel.

The pain settles into unexpected places on the body, like the bony interior of the posterior that gets rubbed in the most ridiculous ways on a bicycle seat — especially one of those Brooks leather jobs that I just had to have for the cool factor. A mere glance at that hard saddle causes phantom pain in the butt.

And there’s the difficulty sleeping, despite the absolute exhaustion at the end of 120K day, with irrational fears of being torn apart by wolves or murdered by a bicycle thief in the night.

But in the aftermath of those journeys, after the pain and exhaustion subside, memories flood back so vividly of the road traversed, the people encountered, the cooling, cleansing swims, the fine camp meals prepared on a single-burner stove. And those memories inspire me to do it all over again.

As the warm season approaches, keep an eye out for epic travelers. And try to give them a little something for their pain.

GLOW Spa by AFYA: A sanctuary of well-being, peace and elegance in the very heart of Guelph

Is it time to get your hearing tested?

SAVE on a Lash Lift & Tint!

Do you suffer with dry/cracked heels?

Breakfast from the Farm at Grand River Raceway!

Reasons Why Working with the Right Mortgage Broker is Important