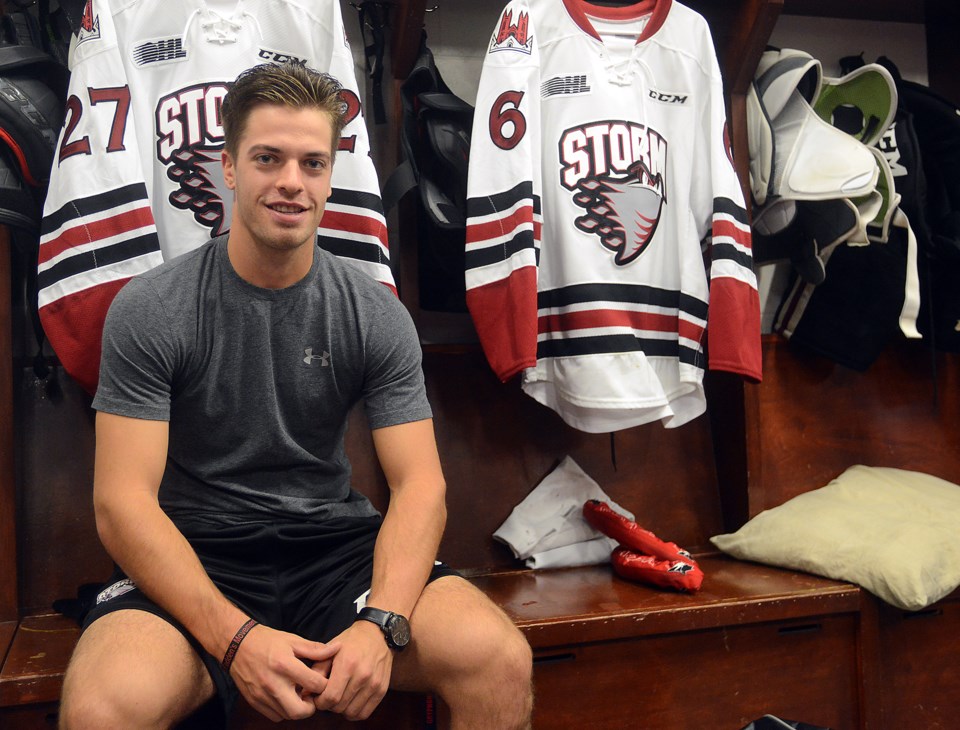 Guelph Storm defenceman Garrett McFadden is trying to break down barriers and stereotypes when it comes to how athletes are expected to handle mental health issues.

McFadden, 19, has started McFadden's Movement (@McFaddensMvmnt), a mental health initiative that will see him connect with local minor hockey teams and athletes and help them prepare and deal with some of the pressures and challenges they face.

"It's about talking to young athletes, especially ones who are in sports where it's getting more serious and more competitive," McFadden said Thursday at the Sleeman Centre.

McFadden said the stereotype is that if a hockey player wants to "make it big" they have to be gritty and not show any weakness.

"At the end of the day, bottling stuff in and not talking about your feelings and experiences with other people that can relate to you and maybe help you out is something that will have a negative effect on your career, your mental health and the person you become."

The seed for McFadden's Movement was planted four years ago when a young hockey player that played in the same Grey Bruce Minor Hockey system that McFadden played in took his own life.

"It was something that shocked everyone in our little towns up there. Everyone knows everyone in the town where I come from," the Kincardine native said.

"It took us by surprise and made us realize that this is a pretty serious topic and something we definitely need to look into more and work towards preventing it."

That boy's suicide, and some of the things McFadden has gone through during his own junior hockey career, motivated him to do something about the challenges athletes face, particularly those in a competitive environment.

McFadden's Movement, which has been created with plenty of help and motivation from Stephanie Coratti in the Storm's front office, is his response.

Anyone wanting to contact McFadden to come talk to their team or player can contact Coratti in the Guelph Storm office.

"It's always been in the back of my mind, thinking of what some players around the league have done to help give back to the community and then look at a way to incorporate my story.

"I definitely wanted to make it relatable for me and get the most out of it I could."

McFadden will be out talking to minor hockey teams about how to deal with some of the pressures they are and will face as they progress up the hockey ladder. Most importantly, he will be stressing that it's okay to ask for help.

If a coach or parent has a particular concern about an individual's well-being, McFadden is more than willing to have a one-on-one conversation with that person.

“Having someone like Garrett McFadden, who is a role model to youth and children, speak out about the importance of positive mental health and suicide awareness is incredibly impactful," said Fred Wagner, executive director of Community Mental Health Association Waterloo Wellington Dufferin.

"The more we talk about suicide awareness and mental health, the more lives will be saved. Kudos to Garrett and the Guelph Storm for their leadership on addressing this crucial issue,” Wagner said in a news release.