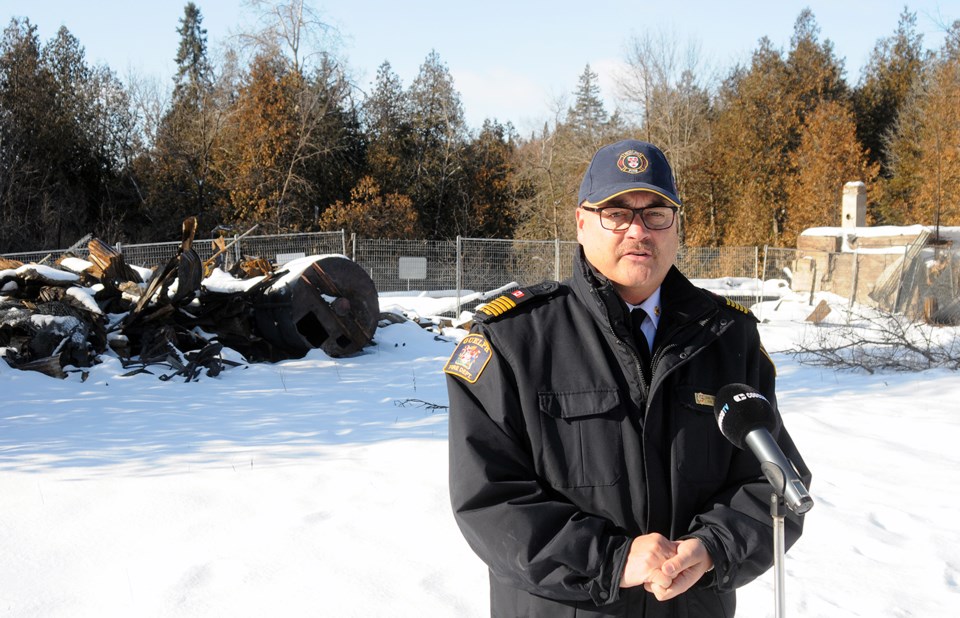 On Thursday Guelph Fire Chief John Osborne stands at the site of a Jan. 19 fire in Everton, just east of Guelph. It is one of 14 suspicious building fires in the last four months. Tony Saxon/GuelphToday

Police say they are looking for more than one suspect in the rash of fires set around over the past four months.

Since last October there has been 14 structure fires, all but one of them in abandoned structures, within a 15 minute drive of in the county's southern tier or just outside it.

There have also been vehicle fires and a large stack of hay bales was ignited earlier this week just outside of .

Wellington OPP Detachment Commander Scott Lawson said Thursday that there is evidence in some of the cases that more than one person was involved.

"At this point we are able to tell the public that in some of the instances the fires have been set deliberately and there have been at least more than one person involved in that particular investigation," Lawson said.

"We aren't prepared to comment at this point on linkages between all the fires, we wouldn't want to get into any evidentiary information in that regard," Lawson said.

Most of the fires have happened in the early hours of the morning in barns and sheds no longer in use. One of the fires was at a working sawmill in Belwood and another destroyed hundreds of thousands of dollars worth of property in two buildings just east of Rockwood.

Police, fire and Crime Stoppers Guelph Wellington held a media event Thursday at the site of one of the fires at a historic former mill in Everton, just east of . That fire occurred Jan. 19.

Crime Stoppers is now offering a minimum $1,000 reward for information leading to an arrest in the case. That reward expires in April.

Guelph Fire Chief John Osborne urged property owners in the county to be vigilant in watching out for any suspicious activity.

He went as far as to recommended inserting surveillance cameras.

There have been no injuries in any of the fires so far, but Osborne said there is concern someone - be it a property owner, first responder or member of the community at large - could get hurt.

"These fires are very serious in our community," he said.

"It's not only that these are primarily abandoned that have been targeted by this person, but we also have to worry about the safety of first responders while they're responding to these fires and members of the public.

"We have fire trucks, police cars, paramedics all responding on our roads and that in itself can create havoc for some people and that could not only put the public but emergency service workers at risk of getting in an accident," Osborne said.

Anyone with information can call police or Crime Stoppers Guelph Wellington at 1-800-222-TIPS or at www.csgw.tips. Tipsters are anonymous, they do not have to speak with police or testify in court.

Fire #10: another unexplained fire just outside Rockwood
Jan 23, 2017 1:00 PM
Comments
We welcome your feedback and encourage you to share your thoughts. We ask that you be respectful of others and their points of view, refrain from personal attacks and stay on topic. To learn about our commenting policies and how we moderate, please read our Community Guidelines.