How police techniques, old and new, captured the killer of a Guelph hotel manager

On Thursday, Raja Dosanjh was found guilty of first-degree murder in a Guelph court room
0
Aug 7, 2019 1:45 PM By: Kenneth Armstrong 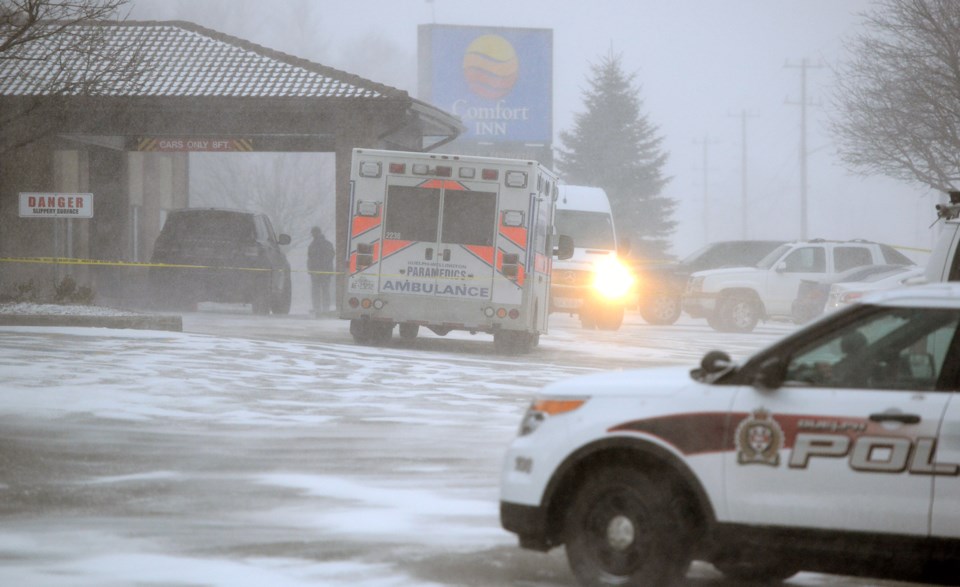 Guelph Police at the scene of a murder investigation on March 1, 2016. Last week, Raja Dosanjh was found guilty of first-degree murder in the case. GuelphToday file photo

The Guelph Police Service used a combination of new forensic techniques and old-fashioned police legwork in the arrest of a man found guilty last week of first-degree murder, says the lead investigator on the case.

D/Const. Brian Welsh said the police work done in the initial hours and days after the murder of Comfort Inn hotel manager Aly Sunderani was key in solving the case.

On Thursday, Raja Dosanjh was found guilty of first-degree murder in a Guelph courtroom. It marked the end of more than three years of work by Guelph Police’s serious Crime Unit, after more than 100 search warrants and thousands of hours of police hours.

In final submissions from the Crown Attorney last week, the jury heard that Dosanjh picked up a rental Infinity QX60 luxury SUV in Mississauga under an assumed name and drove it to Guelph at the time of the murder.

Welsh said they could prove that the car made the trip from Mississauga to Guelph, and was outside the Comfort Inn at the time of the murder, because police were able to download and interpret the GPS data stored in the vehicle’s infotainment system.

The downloading and reconstruction of GPS data from the QX60 was done by a forensic analyst at the OPP headquarters in Orillia. The analyst was able to download a complete track log from the vehicle, from the time it was rented until the time it was returned.

“We were a little uncertain about what information it potentially held,” said Welsh of the car’s infotainment system. “Every time it was turned on we knew exactly where it was.”

In addition to the GPS track log, the OPP was able to also recover the phone contact list of Dosanjh’s brother-in-law, who was thought to have been driving the car. That information was deleted before the car was returned to the rental agency, but was able to be recovered by police.

But how did Guelph Police find the rental car in the first place?

The QX60 was seen entering the parking lot on surveillance video at the Comfort Inn at the time of the murder and video from a neighbouring property showed it leaving, but a license plate was not visible in either video.

“We organized a canvas of businesses in the area for their surveillance videos. Our tactical team did the majority of the canvassing, they were responsible for going door-to-door, identifying whether they had video from the time, collecting it and getting it to another officer who was collecting it all and writing reports on it,” said Welsh.

Eventually, surveillance footage from a nearby business was found to show a QX60 with a clear license plate number that was later confirmed to be the vehicle used in the murder.

Surveillance footage at the scene showed the killer, but the images were not clear enough to identify a suspect.

“A lot of resources were deployed in the first three or four days and because of that we were successful in identifying the vehicle and ultimately that led us to other things — identifying Mr. Dosanjh,” he added.

Police also made an appeal at the time of the murder for dash cam footage in the area.

“Someone came forward and provided us with their dash cam video and it was actually pretty instrumental in the case because it showed the QX60 parked in front of the Comfort Inn,” said Welsh. “So we were able to show the jury that at this time, this car is driving down the street and that car is parked there.”

“It was great to see someone in the community come forward to help us out.”

Although the QX60 may not be as common as some other cars on the road, it had decorative features that actually made identifying it on video a little easier for police.

“It’s pretty distinct, particularly the rear windows on the side — they have that sort of crescent shape — we were able to see that,” said Welsh.

In a stroke of good luck, the QX60 had not yet been cleaned at the rental agency when police seized the car. Investigators were able to find gunshot residue on the passenger side, further proving the vehicle was involved in the killing.

The Crown did not provide a motive for the murder and Burnaby, B.C.-based Dosanjh did not have any known ties to the Guelph area.

“If it wasn’t for the tactical team finding this video and investigators in my office going through the video and identifying the plate — this is in all likelihood unsolved,” said Welsh.

Sunderani was shot multiple times in the chest, arms and abdomen with a submachine gun, which was left at the scene. DNA of three individuals was found on the grip of the gun.

The DNA was sent to the Centre for Forensic Sciences in Toronto to be evaluated. There, investigators used a recently devised method called STR Mix to determine the source. It showed the sample was 3.7-million times more likely to have come from Dosanjh and two other sources than from three unknown sources.

“If it’s not the first homicide case (STR Mix) has been used in Ontario, it has to be one of the first,” said Welsh.

A request for comment from the Centre for Forensic Sciences about the use of STR Mix was not immediately returned.

Guelph Police continued collecting evidence to put together as many pieces of the puzzle as possible, said Welsh.

“There was probably close to 100 search warrant production orders written in this case, mostly for things like flight records and phone records and bank records,” said Welsh. “Without that old-fashioned policing of getting out and going door to door and asking for information, then getting and evaluating the information, it doesn’t get solved.”

“Some (pieces of the puzzle) were bigger and more significant and some were smaller. There wasn’t one piece that would tip it in your favour, but when you put it together, you’re left with the fact he was responsible for the murder,” said Welsh.

Dosanjh was sentenced to life imprisonment, with no chance of parole for 25 years. His sentence begins on the date of his Feb. 25, 2017 arrest. The defence attorney in the case said she plans to file an appeal.

“Everybody from our side is satisfied the conviction was right,” said Welsh. “To use a cliche, justice was served, and the right decision was made because we believe he was responsible.”