Pounding the pavement for Project Jeb

Dundas man passes throught the area on his 60-day trek to raise awareness about male mental health issues and suicide
Oct 17, 2020 9:00 AM By: Richard Vivian 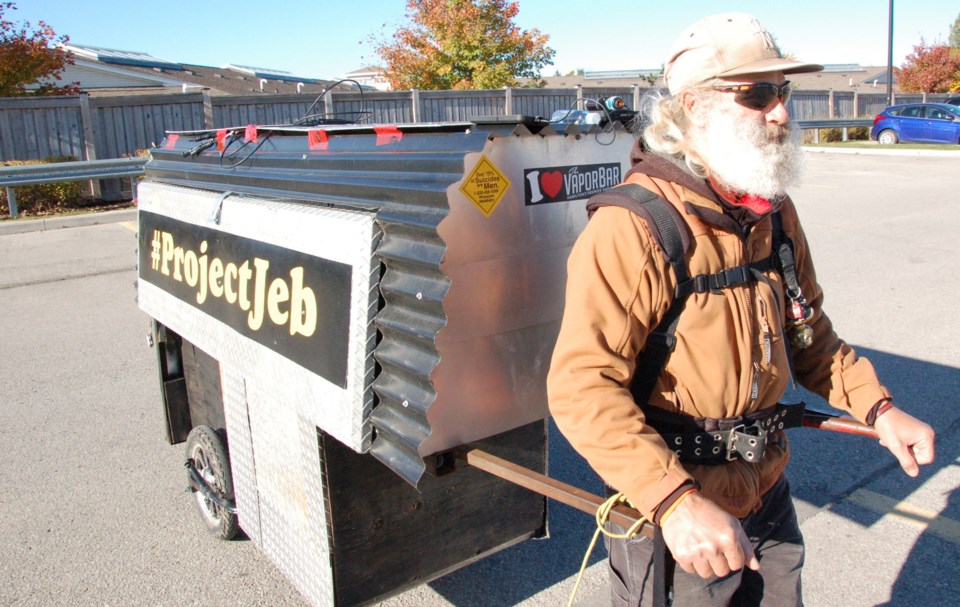 FERGUS – Daniel Perrins’ knees are a little sore and he’s sometimes pretty cold these days, but he’s determined to raise awareness about male mental health issues and the prevelence of suicide in our society, so he marches on.

Perrins is the man behind Project Jeb, an annual initiative that sees him and his faithful companion Charger, a German sheperd cross, head out on foot in hopes of inspiring conversations and potentially saving lives.

With them he pulls a homemade rig that resembles a casket, but is largely intended to carry his supplies and provide shelter when necessary.

“Male suicide hits so many people. It’s like a pebble in a pond, the ripples just go out and out and out,” said Perrins, who has lost a brother and about eight male friends to suicide through the years.

The campaign is named after his previous dog, Jeb, who joined him on his first trek.

GuelphToday caught up with Perrins at the north end of Fergus on Friday, day 24 of this year’s trek.

As always, he doesn’t have a specific route or destination in mind, other than to conclude his voyage as he has for each of the past five years, at Queen’s Park. Before he heads home to Dundas, that is.

“That’s where our politicians are and they’re the ones who are supposed to be addressing society’s issues,” he said of Queen’s Park. “They don’t come out and say ‘hi’ to me but I still give them a little screaming-at.

“If the politicians want to come out and talk, I’m there.”

Government of Canada statistics show that approximately 11 people die by suicide each day, or about 4,000 per year. One-third of those deaths are people between the ages of 45 and 59.

All too often these statistics are overlooked, Perrins believes.

“I’m not saying that men matter more, but I’m certainly not willing to accept that men matter less,” he said. “I don’t know why … the powers that be aren’t really paying attention to this issue.”

This year’s Project Jeb adventure began on Sept. 23 and has, so far, taken him north along Hwy. 6 from Dundas through Guelph and onward up into rural Wellington County. The plan, he explained, is to spend 30 days walking in a generally northern direction, followed by 30 more days back home, including the previously mentioned stop in Toronto.

Along the way he stops to chat with people about what he’s doing and why he’s doing it. Many more people honk or wave as they pass him and Charger.

For the most part, he said, people have been welcoming of his message and encouraging of his attempts to raise awareness. In many cases, they have their own stories to share with him of how suicide has impacted their life.

This is his sixth year in a row setting out on the Project Jeb campaign, though the direction and duration is different each time around.

“I just pick a different compass direction every year,” he said. ”Sometimes it’s three weeks, sometimes it’s two months. It just depends on what I can accomplish.

Perrins pounds the proverbial pavement – usually it’s the soft shoulder of the road – most days of Project Jeb, stopping only for the occasional visit and home-cooked meal with friends, or to “tarp up” for protection from rain and high winds.

He can sleep inside the contraption he pulls, but generally prefers to sleep outside in a sleeping bag, and wearing layers of insulated clothing, so he and Charger can be together.

Perrins, 51, said he’ll keep setting out on this annual campaign for as long as his knees will allow. He currently sees no end in sight for it.

“I figure that at this point in life, I should be looking to make society better for the next generation.”

LETTER: Former mayor weighs in on council composition review process
Oct 28, 2020 8:00 PM
Comments
We welcome your feedback and encourage you to share your thoughts. We ask that you be respectful of others and their points of view, refrain from personal attacks and stay on topic. To learn about our commenting policies and how we moderate, please read our Community Guidelines.