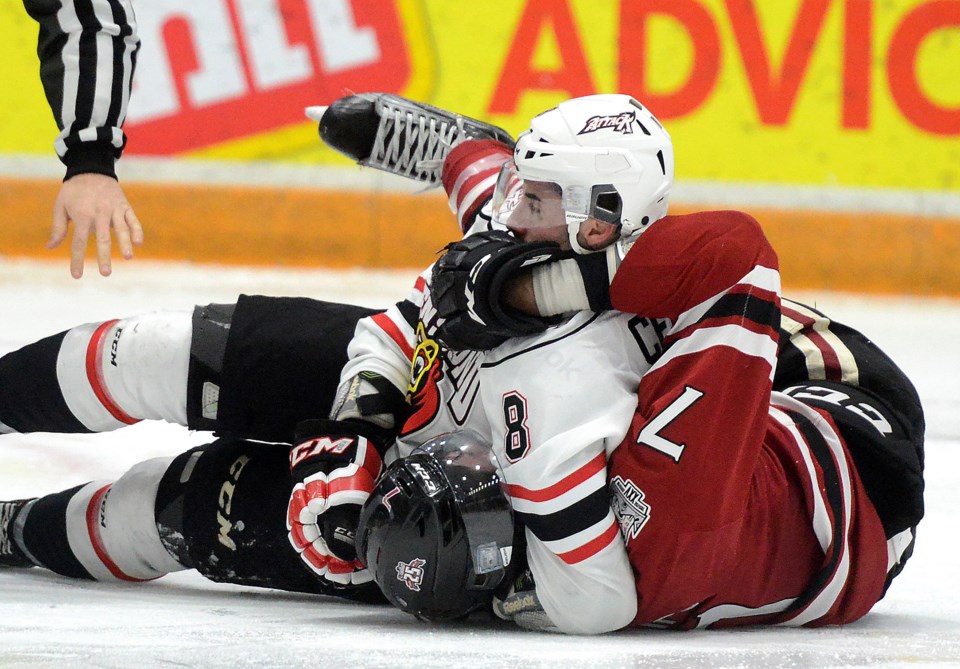 Finally getting back into the groove after missing over a month with an ankle injury, Ratcliffe had the first multi-point game of his career Friday night as the Guelph Storm snapped a four-game losing streak with a 5-3 win over the Owen Sound Attack at the Sleeman Centre.

Ratcliffe scored once and assisted on two others.

"Skalds (coach Jarrod Skalde) has been all over me to really improve in practice and it really showed tonight I think," Ratcliffe said. "I've got my stride back. I feel like I'm right back on the mental aspect too."

Ratcliffe was warming up for a game in Kitchener on Dec. 8 when a teammate slipped and fell on his leg. The result was a high ankle sprain that kept him sidelined for five weeks, missing at total of 14 games.

At the time of the injury Ratcliffe had a point in each of his previous six games.

Ratcliffe has been the beneficiary of a lot of ice time for a rookie this season, both from Skalde and former coach Bill Stewart. He knows that isn't always the case with 16 year olds.

"I'm so appreciative of it I can't really explain it. The opportunities that Skalds and Harv (assistant coach Todd Harvey) are giving me ... I'm blessed."

Skalde said Ratcliffe played his best game since returning from his injury.

"More importantly he played with confidence," the Storm coach said. "That was the most confident I've seen him play."

Skalde said one of the keys to Ratcliffe's success is puck protection: moving his feet and using his lanky frame to protect the puck.

James McEwan scored a pair of third period goals to tie the game then put Guelph ahead on Friday.

The First was a power play snipe to the top corner with the help of a nice screen by Givani Smith. On the eventual game winner he broke in on a two-on-one with Matt Hotchkiss, who delivered a nice feed to McEwan who made a little deke to his backhand before putting it past Owen Sound goaltender Daniel Dekoning.

Nic Sicoly iced the game with an empty-net goal in the final minute.

Jake Bricknell had the other Storm goal.