Ali Al Baghlani lived and worked in Iraq for most of his life, but now calls Guelph his home
Sep 24, 2019 7:00 AM By: Kenneth Armstrong 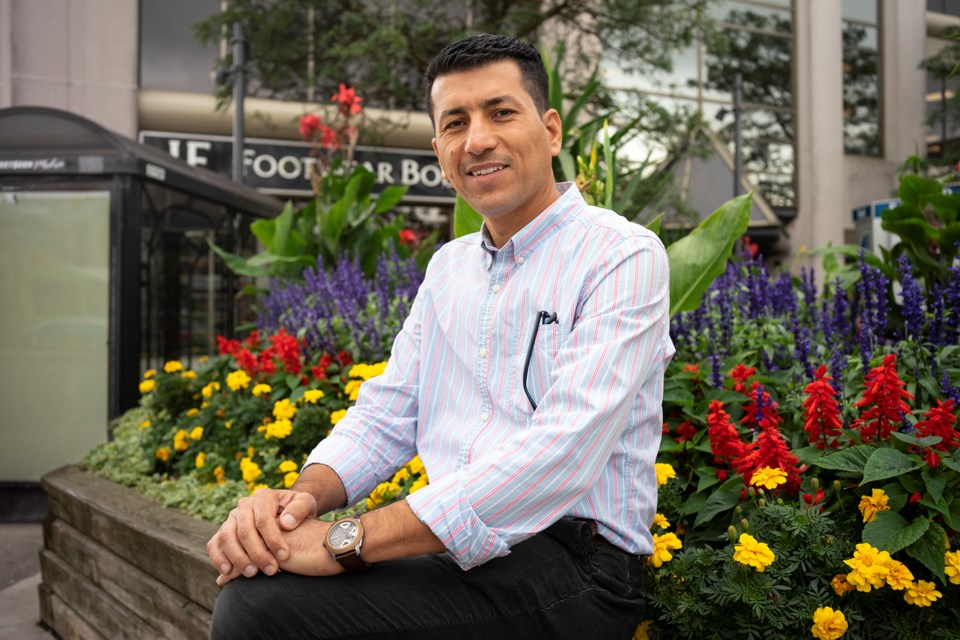 Ali Al Baghlani lived and worked in Iraq for most of his life, but now calls Guelph his home. Khalaf has created a YouTube channel and Facebook page to share his experiences with other people in a similar situation or with people in his home country. Kenneth Armstrong/GuelphToday

Now living in Guelph as a refugee, Iraq-born Ali Al Baghlani is using the skills he learned as a video journalist and academic in his home country to showcase his newly-adopted country, with the hope of making a difference here and back home.

Al Baghlani came to Canada just over a year ago seeking refugee status from his war-torn home country of Iraq, where he once taught at the University of Basra, managed its cultural centre and also worked as a freelance journalist.

“As a journalist, activist and academic who used to speak in public and in media — that cost me a lot,” said Al Baghlani. “It cost me my position and my work and I had to flee my country to come to Canada.”

Al Baghlani first travelled to the United States, but became frustrated with the refugee claimant process in that country.

“They didn’t give me one word that I would be accepted,” he said of the process in the United States. “There are people who have been in America for five or six years without any kind of status.”

Al Baghlani then came to Canada, citing a more tolerant system. He stayed in Montreal for a week as he finished his paperwork and then made his way to Mississauga.

“I stayed for 10 days. I couldn’t find a place in Mississauga because no one wanted to rent a house for a newcomer,” said Al Baghlani. "They ask for credit check and employment status — even if you present a guarantor, they wouldn’t take you because the landlords are scared of having someone who cannot pay.”

He came to Guelph over a year ago to temporarily stay with a friend.

“I fell in love with Guelph because I saw it was set up kind of like a British city,” said Al Baghlani. “I have good memories from my studying in the U.K., so I said this was the place I wanted to be.”

Al Baghlani began to volunteer in Guelph, acting as an interpreter for people who speak Arabic and are trying to navigate the systems in English in Canada.

“I help refugee families with their doctor appointments and some paperwork,” said Al Baghlani. “I try to give back through my volunteer work.”

Al Baghlani is currently working two paying jobs, in addition to his many volunteer responsibilities, with the hopes of eventually earning his PhD in Canada.

“Here in Canada, I just figured to work as a teacher here on a university level — even with my masters’ degree from the U.K. in international business, that would be difficult,” he said.

Wishing he could do more for the people of his home country, Al Baghlani recently began using his smartphone to record videos in Arabic, speaking about Canada and Guelph, with an intended audience of other recent immigrants to Canada, as well as people in the Arab-speaking world.

His videos have centred around subjects like health care, the education system and immigration system in Canada.

“Recently I said to myself the I am a journalist, a video journalist, I know how to film people and I know how to edit,” he said. “I am using my skills as a storyteller to raise peoples’ awareness, to make a difference in their lives.”

Guelph is a common backdrop in his videos and Al Baghlani says he uses the Royal City as a theme throughout many of them.

The people of Guelph have three main characteristics Al Baghlani said wants to share with people through his videos — that they are polite, care about the environment and are peaceful.

“Those three themes — I try to put them in every single video,” said Al Baghlani. “I am trying to plant those themes to the people (in Iraq).”

He hopes his videos will help other Arabic-speaking refugees in Canada and, more importantly, to create a greater link between the people of Canada and Iraq, culturally and economically.

“This is how I want to give back to Canada — the country that protected me, the community that welcomed me and made me feel at home,” said Al Baghlani.

He hopes some of the good aspects of Canada will rub off on Iraq on its way to becoming a more tolerant and secular society.

“I always try to help my people. It’s my responsibility,” said Al Baghlani. “I don’t forget my people or the country where I grew up.”