You can dispose of them by scraping them off the tree with a butter knife, soaking them in soapy water for 24 hours
May 3, 2021 7:00 PM By: Ariel Deutschmann 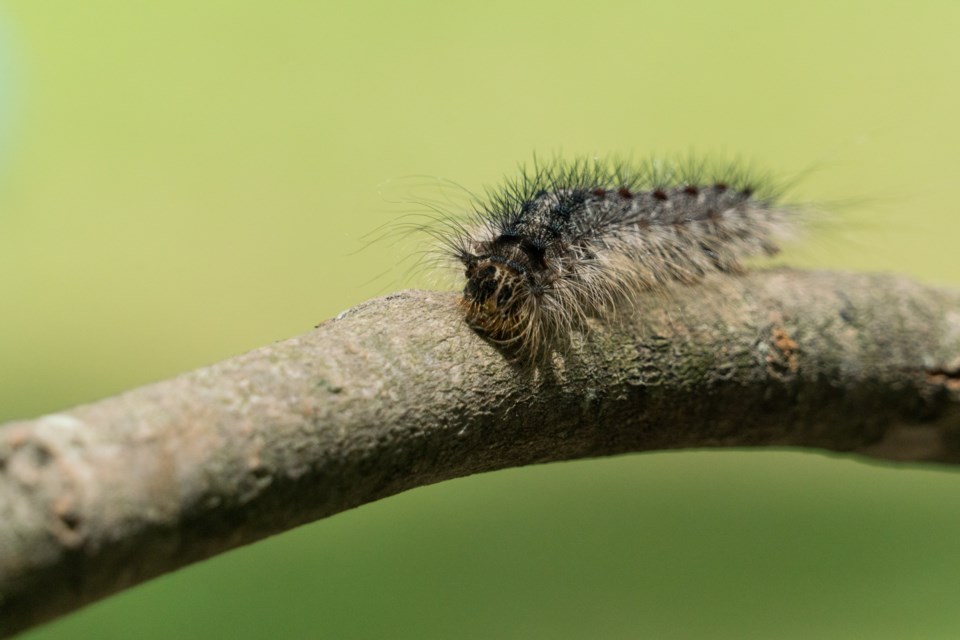 Now is the time to stop European gypsy moths before they start eating the leaves on the broad-leaf trees in your backyard.

An invasive species seen across Ontario, outbreaks of gypsy moths occur every seven to 10 years.

Recently, the City of Guelph asked residents to be aware of brown patches the size of a human palm on trees which can indicate gypsy moth eggs. With the warm weather approaching, these eggs hatch during late April and early May.

“The egg masses are still around, so there’s still a chance,” says Timea Filer, an urban technologist with the parks and recreation department. “If you can get to them in the next couple of weeks before things really warm up."

If residents find eggs and they haven’t hatched yet, Filer explains you can dispose of them by scraping them off the tree with a butter knife, soaking them in soapy water for 24 hours.

“The egg masses can also be found on other things in your backyard, like underneath picnic tables,” says Filer, warning residents to look around their backyard.

If the eggs have hatched, Filer said there are some other steps people can take to get rid of gypsy moths. These steps include spraying young caterpillars with a naturally occurring bacteria spray called BTK or handpick the larvae off the tree.

To identify a gypsy moth caterpillar, residents should look out for a brown or black caterpillar with blue and red dots along its back.

Filer mentions residents can also trap the male moths, set up sticky bans or burlap bans around the base of the affected trees.

For more severe cases, residents can hire a licensed exterminator to spray a synthetic insecticide, which is used to deal with emerald ash borers.

“We’ll never be able to eradicate gypsy moths, but we can do some of these basic things to control the population,” she says.

Guelph resident Martin Litchfield is a retired urban forester who has experience dealing with gypsy moths.

He said the invasive species only has a three or four month cycle, but can lay up to 300 eggs in one patch.

“If they get under trees, then you won’t be able to handle it, because there are a lot of bugs,” said Litchfield.

Once hatched, the young caterpillars will feast on the leaves of maple, birch, oak, and will even eat pine trees.

“The caterpillars will climb up the tree and then eat the new leaves coming out,” says Litchfield, “And when they eat the leaves, obviously...the tree doesn’t get enough energy.”

“It won’t kill the tree in one year, but if it hits it for two or three years, it will make the tree so weak that it will die off.”

Brought to North America in the mid 1800s for silk production, Litchfield explains gypsy moths migrated from Boston into Ontario and Quebec. They are also starting to be seen in the Maritimes.

“Last year was the first sighting in New Brunswick and Nova Scotia,” he says, mentioning female moths can’t fly and stays on logs or backs of trucks, travelling into other places that way.

With few natural predators, infestations can develop and wreak havoc on tree canopies.

While they can be controlled through healthy bird populations, Litchfield mentions there is a fungus and virus that can kill gypsy moths.

“For both those programs, you need a cool, wet spring while they’re coming out,” says Litchfield.

Although the city is asking residents to keep an eye out for gypsy moths, Filer explains the risk of defoliation is low, according to a January 2021 assessment.

“They did do the surveys in areas where we have oak and Norway (maple trees) specifically,” says Filer about the city hiring a consultant for the assessment.

“There is a certain threshold in the number of trees, and the numbers were low enough, where we didn’t have any areas where there are going to be significant defoliation.”

Midsummer, Filer mentions the city will inspect the areas found with a larger number of egg masses to assess the levels of defoliation.

If residents do see a gypsy moth egg mass, they can file a report with the city here.