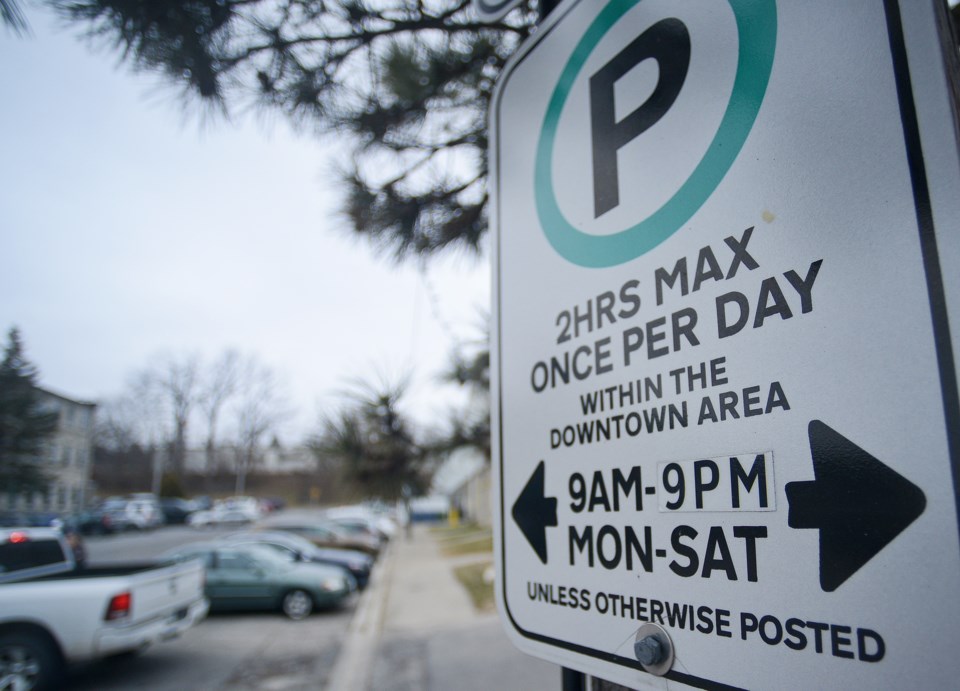 Two years ago the city was close to spending $700,000 on new parking meters in anticipation of a return to paid on-street parking in Downtown Guelph.

It was in the proposed 2017 city budget, but eventually removed by council during deliberations.

Now the city seems to be hesitating at the whole concept of returning to paid on-street parking.

At Tuesday’s Committee of the Whole meeting, city council declined to endorse a staff recommendation that a return to paid on-street parking be scheduled for the fall of 2019.

Council wants more information on the impact of charging people to park on downtown streets: on businesses and to the city (and city coffers) as a whole.

“When is this going to be done? It just seems like the never-ending saga of parking in the downtown,” Mayor Cam Guthrie said.

“Until it’s measured, until we’re fully-informed, I don’t think we should be moving forward with this,” Guthrie said.

He even wondered out loud of the city should even “be in the business of parking at all” and mentioned private parking scenarios in other municipalities.

“Tax base or user fee: it has to be one or the other,” Coun. Dan Gibson said, urging council to avoid taking a “populist” position on the issue.

Staff will return to council in May with more information and a decision is possible at that time.

A special council meeting on the issue is also a possibility.

The problem is what proponents and opponents both agree is a lack of hard evidence to show what the economic impact will be to the downtown.

He said there just isn’t enough information on the table to show what effect the move would have on businesses, something several councillors agreed with.

“Before we change, we need solid evidence that we could withstand the economic impact,” Williams said, adding that right now there is only anecdotal evidence.

He said the $1 million a year to the city’s coffers generated through on-street parking would look like “chicken feed” if it damages the economic health of downtown.

“It’s still a blind spot. Until we get the info we should hold off,” Williams said.

The city moved to two-hour free on-street parking downtown in 2007 as an incentive for people to shop downtown.

But the money it generates is needed to pay for the building and upkeep of new parkades, council was told Monday.

Deputy CAO Scott Stewart told council that it’s “reaching that fish or cut bait” point on paid on-street parking and that he wasn’t sure the data people are looking for to fully assess the economic impact exists.

Allister McIlveen, Manager, Transportation Services said on-street parking would generate $1 million in revenue in its first year and an estimated $34 million over the next 20 years.

That money is needed to pay for new parking facilities like the one currently being built on Wilson Street and one eventually planned for Baker Street.

It is also needed for the upkeep of those facilities, McIlveen said.

The new parking facility that will eventually be on Baker Street, probably an underground system, will cost in the neighbourhood of $40 million to build, council was told.

Guthrie said he believes part of the problem is enforcement of the two-hour rule.

“I’ve been saying it for years,” he said.

Council did endorse four staff recommendations, including accepting the Parking Technology Selection and Implementation Metrics Study done by a consultant and moving forward with stakeholder discussions about an implementation plan.

City asks residents to move vehicles off streets and sidewalks for plow out
Jan 18, 2020 5:18 PM
Comments
We welcome your feedback and encourage you to share your thoughts on this story. We ask that you be respectful of others and their points of view, refrain from personal attacks and stay on topic. To learn about our commenting policies and how we moderate, please read our Community Guidelines.