The City of Guelph says the ads do not contravene its advertising policy
Oct 27, 2017 10:00 AM By: Kenneth Armstrong 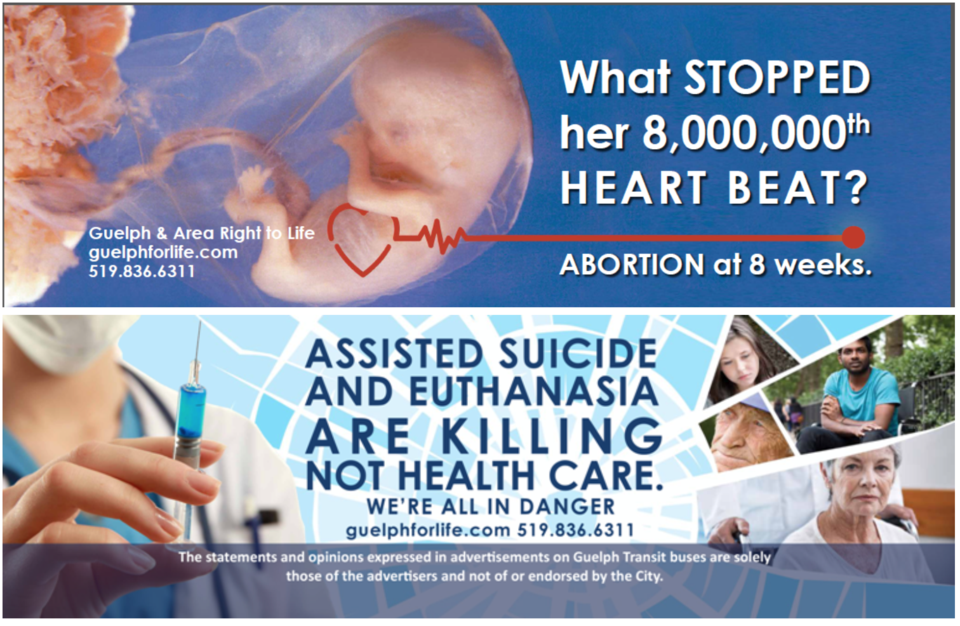 A Guelph woman who says the city should not be influencing a woman's right to choose has taken her complaint about anti-abortion city bus ads to Advertising Standards Canada.

Fiona Douglas had not seen bus ads for Guelph and Area Right to Life for a number of years and had assumed the City had stopped allowing them to advertise on public transit — then she found herself in traffic behind a Guelph Transit bus with one of their advertisements on the back.

The advertisement showed a fetus with the caption ‘What stopped her 8,000,000th heart beat? Abortion at 8 weeks.’

“When I saw it I realized they hadn’t gone away, they had always been there and I just hadn’t encountered them for whatever reason,” said Douglas.

Guelph and Area Right to Life’s web site states that four different ads have been running on Guelph Transit for 15 years.

Two of the advertisements feature a fetus, a third ad features a phone number for a crisis pregnancy support program, while the fourth deals with the issue of doctor assisted death.

"These ads help us to reach the entire city every day with the pro-life message, and much-needed information about local pregnancy support," the web site states.

The web site features a ‘donate now’ option, as well as information how supporters can fund raise for the cause.

Douglas said she doesn’t understand why the content is allowed on publicly-funded transit for a service that has been legal for over 30 years.

“I think (people) should feel safe in their communities and able to get the healthcare they are legally entitled to. It would be the same thing as having an anti-open heart surgery ad — it just doesn’t make any sense,” said Douglas.

Initially, she complained by Twitter about the advertisement to the city and to Mayor Cam Guthrie that the ads could have a triggering effect on someone who has had an abortion and could have a negative effect on young girls.

In a response on Twitter, Guthrie noted the City does not endorse advertisements that are displayed on their buses and pointed Douglas to the city’s advertising standards policy.

Douglas questions whether the city’s own policy should allow the Right to Life ads.

Section 2.1, Subsection V of the policy states ads should not be ‘offensive in style, content or method of presentation’.

In another Tweet, Guthrie told Douglas, "You don't want any Mayor deciding what is or is not 'triggering' or 'offensive'. Freedom of Speech and Charter is what should guide us all."

“They use words like ‘offensive’ in their policy document — which is a subjective term,” said Douglas. “The mayor said he didn’t want to comment on whether something is offensive or not. Well then, remove it from your policy.”

Douglas then made a formal complaint to Advertising Standards Canada (ASC), the national not-for-profit regulatory body for the advertising industry.

In her first complaint, Douglas noted the ad seems to go against the city’s own policy.

In a written response from ASC, Douglas was told it only rules on content of advertisements against the Canadian Code of Advertising Standards and cannot compel a municipality to pull an advertisement because it violates a city’s own policy.

Douglas has since made a second formal complaint, this time arguing the advertisement contradicts Section 7 of the Canadian Charter of Rights and Freedoms, which states: "Everyone has the right to life, liberty and security of the person, and the right not to be deprived thereof except in accordance with the principles of fundamental justice."

In the second complaint, Douglas wrote the ad "shames women for getting abortions, a procedure they are legally allowed to get in this county."

On Wednesday, the Ontario legislature passed a bill that will soon make it illegal for anyone to hold an anti-abortion protest, advising a person to not get an abortion or intimidating and interfering with a woman's ability to access the service within a 50 to 150 metre zone of clinics.

In addition, those activities are banned within 150 metres of the home of abortion staff or of professionals who provide the service.

Depending on how the legislation is worded, said Douglas, the bus ads may soon be in violation of the new legislation if they were to pass by the home of a staff member or professional who provides abortion services.

“That kind of messaging makes people feel unsafe to make those decisions, and could make medical practitioners feel unsafe to go to work. That threat to public safety is exactly why these ads break the city's own rules in terms of ad selection criteria,” said Douglas.

A statement e-mailed to GuelphToday from the city stated: "The current Guelph and Area Right to Life advertisement does not contravene our advertising policy and there is no record that this advertisement is in violation of the (Canadian Code of Advertising Standards), and although the advertisement may be considered controversial in nature, refusing to post the advertisement could be seen as limiting freedom of expression under the Charter of Rights and Freedoms."

Douglas said she does not believe displaying of the ads on publicly-funded transit is a free speech issue.

“I think (the city is) trying to sweep it under the rug because it breaks their own rules. If they want to stand by their own rules, they have to change them,” she said.