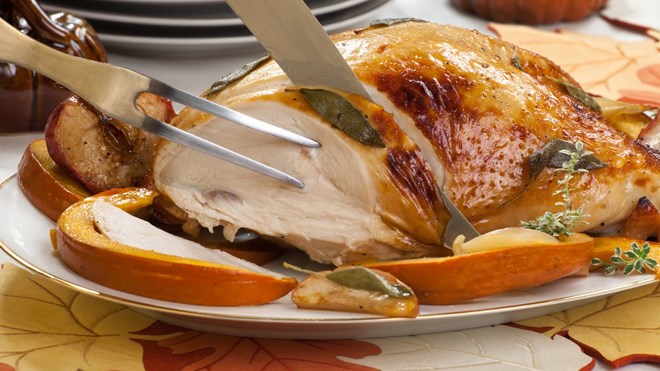 It’s the most wonderful time of the year which means lots of seasonal cooking from eggnog to turkey to baked goods.

Which begs the questions, what is the best way to thaw a turkey or make eggnog and what’s the problem with eating raw cookie dough?

Professor Jeffrey Farber, a food microbiologist and director of the Canadian Research Institute for Food Safety at the University of Guelph, recently completed a study that examined food safety practices suggested in popular cookbooks and found that a good portion of them get it wrong, with many giving unsafe instructions, such as advising home cooks to rinse off poultry.

He says food poisoning affects about one in eight Canadians every year, and much of that is likely due to unsafe handling, cooking and cleaning procedures in the home.

Farber says the question he gets asked the most during the holiday season is about the safety of homemade eggnog.

Because the store-bought eggnog is pasteurized, it is safe and doesn’t require any heating to kill harmful bacteria like salmonella. However, for those who wish to make their own eggnog at home for the holiday season, Farber recommends some steps to make it safe to consume.

He says buy pasteurized egg-milk ingredients or heat the egg-milk mixture. He says the recommended temperature is 71 C and suggests to store the mixture in small amounts using shallow containers so it can cool quickly.

“With all the leftovers, the general advice is to use refrigerated leftovers within two to three days or to freeze it but that’s only good for some foods,” says Farber.

"The main thing is to get the food out of the danger zone— a zone where bacteria grow very quickly,” says Farber.

He says bacteria can grow rapidly in room temperature and the danger zone scales from 4 C to 60 C.

Farber has some important advice for cookie dough lovers out there as well.

“We know from a number of studies that raw eggs can actually contain salmonella bacteria. So really we should be making sure that kids don’t eat any uncooked cookie dough or batter or frosting that are made with raw fresh eggs,” says Farber.

Raw dough can contain bacteria that cause disease because it hasn’t been treated to kill germs such as E.coli which can cause food poisoning.

In 2017, the Public Health Agency of Canada worked with federal and provincial public health partners to investigate an outbreak of E.coli that was connected to flour products manufactured by Ardent Mills. Subsequently, flour products were recalled across Canada.

As for cooking a turkey, Farber says it is important to observe the temperature.

“We try to educate consumers that they should be using a big thermometer to cook. For poultry, we like to advise consumers to cook it to 82 C and that’s very important,” says Farber.

Farber also says it is best to cook the stuffing separately in the oven or in a separate dish to avoid tight stuffing that prevents heat from penetrating through the turkey.

“If you really need to stuff your turkey, try to stuff it very loosely before roasting and you can remove all the stuffing right after you cook it,” says Farber.

He also says thawing frozen turkeys should be done gradually.

“We do not advise people to thaw turkey in the microwave,” says Farber.

He says the best way is to thaw it in the refrigerator or in cold water so it thaws evenly.

Fruit juices and ciders become popular during the holiday season and Farber says apple cider can be very dangerous for children under five years of age.

"My recommendation is either you check the label and buy pasteurized apple cider or you can minimize the risk by boiling the apple cider to make sure it’s safe for everyone,” says Farber.

Farber says it's important that people refrigerate their turkey leftovers as quickly as possible in uncovered shallow containers so they cool quickly.

“We usually use the ballpark figure that people should use their refrigerated leftovers within two to three days or freeze them right away for later use,” says Farber.

“Also, don’t overstock your fridge. People pack their fridge from front to back with a lot of stuff and you can’t get the cool air to circulate properly around all the food.”