Guelph MPP says Wednesday's announcement was made to distract from a recently-announced proposal by the Ford government for a new 400-series highway to be built on part of the existing Green Belt
Feb 17, 2021 12:39 PM By: Kenneth Armstrong 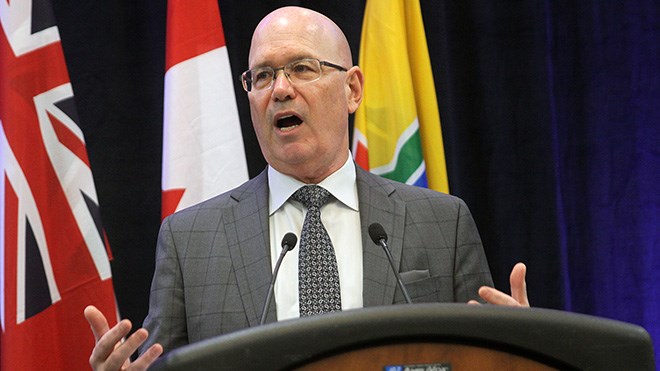 Two years after Guelph’s MPP introduced his first private members bill to protect the Paris Galt Moraine the Ontario government says it is seeking to add the ecologically sensitive area to the province’s protected Green Belt, but Mike Schreiner says the newfound support from the government is a smokescreen.

In an announcement made on Wednesday, Ontario’s Minister of Municipal Affairs and Housing, Steve Clark said the provincial government is beginning consultations to expand the province’s protected Green Belt to include urban river valleys, like Toronto’s Don Valley, as well as the Paris Galt Moraine, which is a wide swath of land south of Guelph.

In a press conference, Clark said the move, if completed, will be the largest expansion of the Green Belt since its creation in 2005.

“This is truly a unique opportunity to preserve more of our farmlands. forests, wetlands, and watersheds,” said Clark. “These lands are home to critical groundwater resources that provide drinking water for many communities.”

The government is beginning a 60-day online public consultation for the proposal.

“We want to hear directly from Ontarians about how we can best protect more environmental, ground water and agricultural resources from development,” said Clark.

Schreiner, who is the Green Party of Ontario leader and sits as Guelph’s MPP, told GuelphToday on Wednesday that he isn’t buying it. He said the announcement was made Wednesday to draw attention away from the government’s allowing the proposed destruction of a number of Ontario’s green spaces, including the recently announced GTA West Highway.

That project is a proposal to create a new 400-series highway that will run through parts of the existing Green Belt.

Schreiner also highlighted a proposal in which the Ontario government is allowing a proposed development in the Duffins Creek wetland through a Minister’s Zoning Order (MZO). That area is not a part of the Green Belt but is ecologically sensitive.

Almost exactly two years ago, Schreiner introduced his first private members bill at Queen’s Part which was titled the Paris Galt Moraine Conservation Act. Schreiner said on Wednesday that bill is still stalled in committee with no measure of support from the government so far.

“Now that they are facing significant public backlash around the misuse of their MZO that will destroy the Duffins Creek wetland and their fast-tracking of the environmental assessment of the GTA West Highway, they cobbled together an announcement that essentially is trying to cover up the destructive things they are going and it appears they are trying to use my private members’ bill to give them some additional cover for what they are doing and I am going to call them out on it,” said Schreiner.

Speaking to media, Clark said he expects through the surveys that accompany the public consultation process the ministry will hear the public’s concerns about the GTA West Highway and other projects.

“Our initiative with growing the Green Belt and the project in the GTA West Corridor are two different projects,” said Clark.

He said critical infrastructure like highways, transit and wastewater projects have been permitted in the Green Belt since it was created, subject to strict environmental conditions.

“This is a plan that doesn’t take existing land out of the Green Belt, it doesn’t allow for land swaps. It doesn’t change any of the policies that the previous government put into place when the Green Belt was created in 2005,” said Clark.

Get a Free Community Hub Program with any annual display package.
Moving your Business while Keeping up Productivity