Sign of the times: Guelph gets its first net-zero subdivision 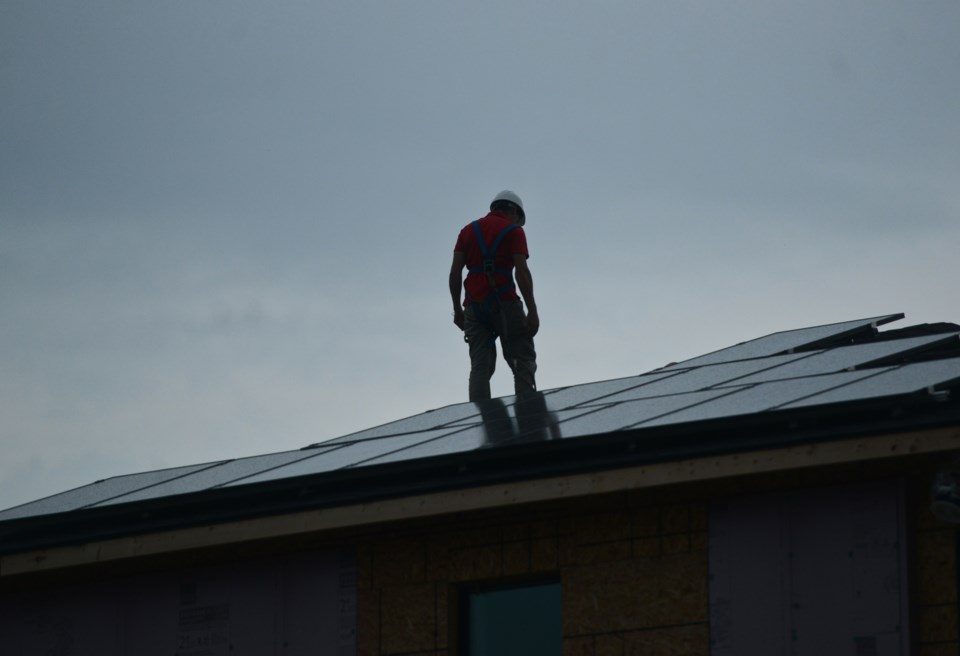 While net-zero homes and retrofits have been happening for some time, the new Hart Village by Terra View Homes is the first time in the city has developer has built a complete subdivision of net-zero homes.

The homes are completely powered by their own solar panels and are heated and cooled with an air-to-air pump.

Guelph MPP Mike Schreiner, incumbent MP Lloyd Longfield and mayor Cam Guthrie were all in attendance for the topping off of the development's first home on Tuesday.

"As soon as you put those panels on, it's net zero," said Brix, adding that there are 29 panels capable of producing 11 kilowatts of power.

He said the firt net-zero home was purchased by people who looked at retrofitting their older home but then decided they were better off purchasing a new home.

"I try to convince everybody that they're buying the home of tomorrow," Brix said. "By 2030 every builder has to build that (net zero), so we're just ahead of everybody else. We're only 11 years away from 'that's code.'"

"I was on a panel 15 years ago trying to figure out how to get to net zero, but you just couldn't do it. The technology wasn't available," Brix said. "But window technology improved and the air-to-air pump is pivotal to net zero because it's so efficient."

"It is so wonderful to be able to brag about Guelph and what a great Guelph story," Schreiner said.

"There's so much talk about the need to be carbon neutral by 2050 and in 2019 we have carbon neutral homes like this," Schreiner said. "Not only is it carbon neutral, but it's beautiful ... proving that you can build net-zero homes and you can make them beautiful, affordable and liveable for families.

Opioid crisis claimed at least 23 lives locally in 2019
Feb 24, 2020 1:30 PM
Comments
We welcome your feedback and encourage you to share your thoughts on this story. We ask that you be respectful of others and their points of view, refrain from personal attacks and stay on topic. To learn about our commenting policies and how we moderate, please read our Community Guidelines.