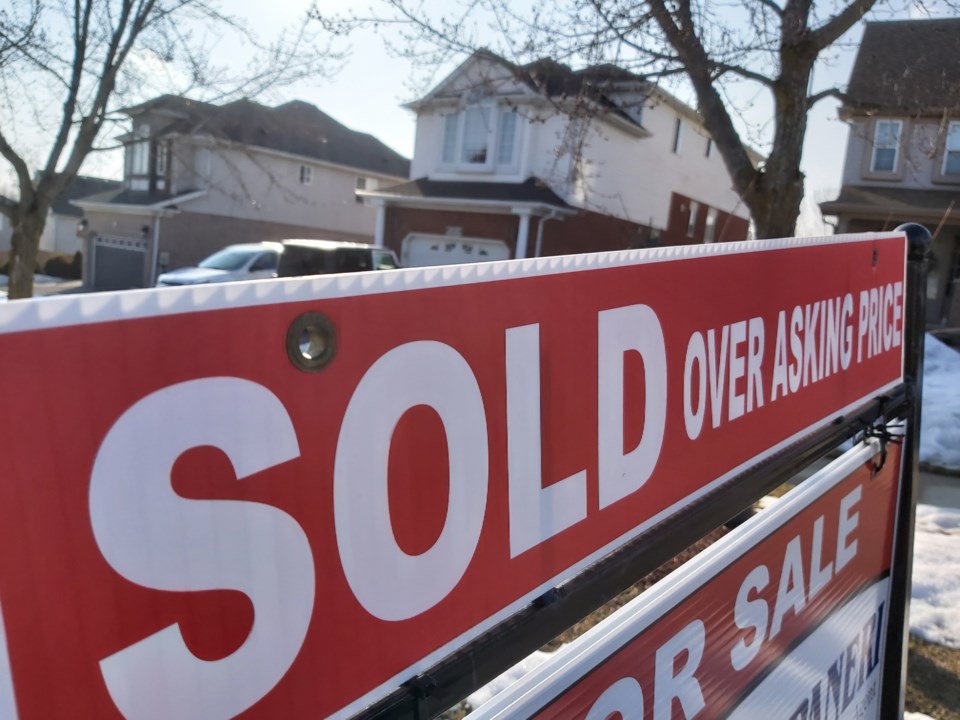 Homes are often selling for over the asking price in Guelph and area. Richard Vivian/GuelphToday

Local homes have nearly doubled in market value during the past five years, with the average sale price hitting about $750,000, notes the latest report from the Guelph and District Association of Realtors.

“We are seeing a huge increase in market value,” said association president Sabrina Essery. “2020 was extremely busy – it broke records – and right now 2021 is heading the same way.”

All indicators of the hot market, year-over-year comparisons for February from 2012 to 2021, show last month saw the most homes sold, with 485, and the most new listings (620). It also had the lowest number of active listings at the end of the month (293) and lowest level of inventory left over – enough to sustain the current sales levels for 0.6 months.

“February is … historically one of the quieter months because it’s mid-winter, it’s dark, properties, typically, are not coming on the market as rapidly,” said Essery, noting an unusually high number of homes were put on the market last month, with many of them selling quickly.

“Guelph and area is an amazing place to invest,” Essery said of what’s driving the sales volume. “My opinion is that it’s because we’re multi-faceted – we have the university, we have light industrial, we have agriculture, we have location.

“People are realizing that they can work from home, so they’re looking for that home office, that home studio where they can do Zoom calls and then if they have to go into the city later on, they can still do that.”

In many cases, Essery added, home buyers are coming to Guelph and area from the Greater Toronto Area and Hamilton.

It’s quite common for homes to sell above the asking price these days – a trend that’s growing.

Essery said it wasn’t surprising to see a home sell for $40,000 above the asking price last fall.

“In the last couple of months there have been some homes and properties that are going for $100,000-plus,” she said. “That’s to do with the demand and the pent-up demand.

“We’re seeing homes that are getting five to 10 offers, even more.”

Competitive offers, and the sting of defeat, is a large part of what’s driving up prices, Essery said. Homes are typically put on the market for several days before offers are accepted and reviewed.

This allows for prospective purchasers to look at a property without overlapping with others doing the same thing, she explained, pointing to safety measures put in place due to the pandemic.

“That gives everyone a chance to see the house in a safe way,” Essery said. “It also gives the buyers the opportunity, if they wish, to do a home inspection prior to the offer date or go talk to their financial advisor to make sure everything is in order.

“Quite often, they’re firm, without conditions.”

For unsuccessful bidders, it often results in them making a “stronger offer” on the next home that grabs their interest for fear of not being on the winning end again.

“It’s hard for buyers right now. It really is,” Essery added. “Hopefully, with the spring coming, more homes will come on the market and that may ease some of that pressure.”

There is no one particular style of home, such as townhouses or single-family detached houses, that’s bearing the brunt of price increases, the realtor association report notes.