What if it's a risk to birds, aquatic organisms and the health of the environment?

New research from the University of Guelph has renewed debate about the safety of a popular agricultural insecticide and it's just not about the honeybees.

Until recently, much of the controversy over a widely used class of systemic pesticides called neonicotinoids has focused on its impact on honeybees. Recent studies suggest it poses an even greater threat to bumblebees and other wild pollinators.

“It seems that bumblebees are more sensitive generally to neonicotinoids than honeybees,” said University of Guelph researcher Nigel Raine. “That is part of the confusion around this. Not all bees are equal in terms of their exposure.”

Raine said that because honeybees are more resilient to the pesticide, using them as the model for determining the health of all pollinators and for developing policies for pesticide use could put the majority of bees at risk.

“There is one honeybee species in Ontario and about 20 bumblebee species,” he said. “The rest, about 385 species, are solitary and we as a scientific community hypothesize that they might be more sensitive than bumblebees. They are really hard to study and we need to do more.”

Raine has worked in cooperation with researchers in the UK and the European Union on a number of studies on pollinator health. One study, released on March 17, examined the sub-lethal effects of neonicotinoids on bumblebee behaviour. It revealed, among other things, that the pesticide impeded their ability to learn and forage, which makes it more difficult for them to feed themselves and care for their young. It also reduces their ability to pollinate wild plants and crops humans rely on for food. 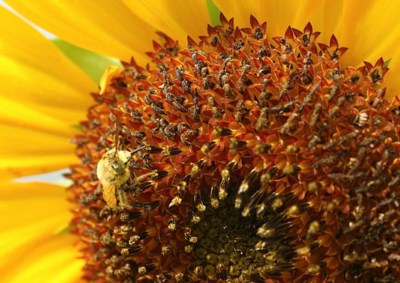 A bee feeds on a flower. Photo by Troy Bridgeman for GuelphToday.

“One in three mouthfuls of food we eat is reliant on the unmanaged pollination services of bees,” said Raine. “That is almost all of your fruits, vegetables and nuts.”

According to the Ontario Ministry of Agriculture Farming and Rural Affairs, honeybees alone pollinate more than $900 million worth of crops in Ontario each year and generate an additional $26 million in honey sales.

“Without pollinators, much of the food we eat and the fields of flowers and trees that we enjoy would not exist,” said Bianca Jamieson, communications manager for OMAFRA.

A province-wide policy for protecting pollinators relies on research

Regulators at OMAFRA have relied on a growing body of independent and government research to develop a province-wide policy for protecting pollinators. Some of that research points to other factors beyond pesticides impacting bees.

A study by researchers at the University of Ottawa and published in this past July in the journal, Science, attributed the decline of Canadian bumblebee populations to habitat loss due to climate change.

“I think they downplayed the role of pesticides in that study,” said Raine. “There are multiple interacting factors and pesticides are one issue.”

It's not just about the honeybees, evidence shows neonicotinoids not entirely staying on targeted crops

Since they were first introduced in the 1990s, few pesticides have been scrutinized as much as neonicotinoids. Despite this, use of neonicotinoids has continued to grow. They now represent one third of all pesticides used in the world and generate nearly $2 billion in sales each year, for makers Bayer and Syngenta.

Neonicotinoid treated seeds were used for 100 per cent of the corn and 75 per cent of soy beans grown in Ontario last year. 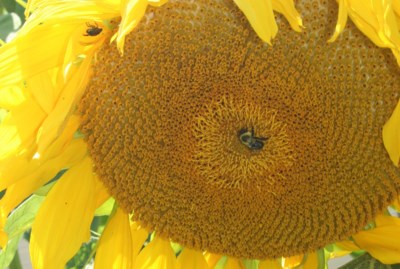 A bumblebee and a beetle feed on a sunflower. Photo by Troy Bridgeman for GuelphToday.

Neonicotinoids are systemic which means they essentially make the entire plant, including the pollen and nectar, neurotoxic thereby protecting it from pests throughout its growth cycle. Small amounts of neonicotinoid are used to coat the seeds eliminating the need to frequently spray the fields. There is evidence that shows the pesticide is not staying entirely on the targeted crops.

“Neonicotinoids have been found in the soil, water, and in some cases, wild plants next to treated fields,” said Andre Gagnon, media relations officer for Health Canada. “They can persist in soil, depending on various factors such as soil type, temperature, and weather. Residues may be present in the following growing season and can be taken up by crops planted where residues remain.”

Beekeepers were among the first to raise concerns about neonicotinoids 10 years ago when they were linked to Colony Collapse Disorder, a sudden increase in honeybee deaths and an overall decline in hive health worldwide.

“More research is needed on the short and long-term impact of these pesticides,” said Tibor Szabo, president of the Ontario Beekeepers Association. “These are not like the old pesticides you could wash off the food before you ate it or gave it to your livestock. This stuff is inside the food.”

The Pest Management Regulatory Agency of Health Canada has worked closely with the Environmental Protection Agency in the United States on a number of studies, but admit more research is needed. 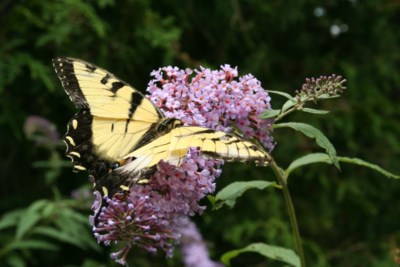 A butterfly collects nectar from a wildflower. Photo by Troy Bridgeman for GuelphToday.

Reactions to neonicotinoid use outside Canada

The European Union has placed a temporary moratorium on neonicotinoids for crops attractive to bees. The government of France is debating legislation that could ban them completely.

In July of last year, the Ontario government introduced new regulations to reduce neonicotinoid use in the province by 80 per cent by 2017. They also required farmers to prove they needed treated seeds to protect their crops.

The Grain Farmers of Ontario oppose the new regulations and took the Ontario Ministry of the Environment and Climate Change to court.

“The challenge we are taking in the courts is about the administration of the regulation and that it doesn’t pass what we call the absurdity test,” said Debra Conlon, government relation consultant for the Grain Farmers of Ontario. “The province is asking us to check for bugs in order to get access to the product but they aren’t giving us the right amount of time to do that.”

They say neonicotinoids protect more than $2.5 billion in crops each year and a total ban in Ontario will cost them more than $600 million.

The case was dismissed and lawyers for the GFO filed a motion of appeal. The motion was heard March 9 and a decision is pending.

Both the GFO and Bayer Crop Science have expressed a commitment to protecting pollinators but were not prepared to comment on the studies released by the University of Guelph last month.

“Health Canada uses bees as a surrogate for wild pollinators,” said Conlon. “That is their protocol. They have a world-class system that looks at the science from around the world.”

As new information becomes available, Health Canada's protocol suggests they would take that information into account and adjust their regulation of the products.

“So far they haven’t done that and it has been out for more than a week,” she said. “People come up with science all the time and they have a legal obligation to react to it. We rely on that."

About the Author: Troy Bridgeman

Troy Bridgeman is a multi-media journalist that has lived and worked in the Guelph community his whole life. He has covered news and events in the city for more than two decades.
Read more

A people-first approach to real estate